Understanding the set of latent variables $Z$ in variational inference

I have been trying to understand variational inference (in a Bayesian context) where we’re trying to approximate $p(Z|X)$ where $Z$ is the set of latent variables and $X$ is the set of observable variables/data points, and I am not exactly sure what $Z$ means.

Your question raises some important points which I also struggled with during self-study. I am by no means an expert, but I will attempt to clarify the various usages of the term "parameter" and "latent variable" and the ways in which the distinctions can get sharpened or blurred. Most of the time it really is a matter of context. There are a number of issues at play here in my opinion, and I understand the crux of each as follows:

The distinction, or lack thereof, between a parameter and a latent variable.

This is relevant to variational inference because the nature of the method is inherently Bayesian. In the sense that it attempts to address situations where computing a posterior over unobserved random variables of interest given observed data is not tractable (for analytical or computational reasons). Its solution is to provide a method for computing a deterministic approximation to this intractable posterior, under arguably strong assumptions about how the family of approximations from which the specific approximation is selected factorises (the mean-field variational family).

Which now brings us to the arrows you stated that you did not understand in the 3rd link. This is a pictorial representation of a joint probability distribution, known as a directed graphical model/directed acyclic graph/Bayesian network and they are used to represent conditional independence relationships between random variables, which are represented as nodes (Murphy has not drawn the nodes because I guess it is not practicable to do so). This implies a particular factorisation of the postulated model/joint probability distribution, and the pictorial representations tend to assume a Bayesian statistical setting, although they are not limited to only Bayesian settings.

Returning to the variational inference setting, here is the Bayesian mixture of Gaussians model from Bishop's PRML p475. Note the unshaded nodes and unshaded nodes:

Variational inference provides a means of approximating the above.

From the perspective of graphical models, however, there is really no fundamental difference between them [i.e. the latent variables and parameters].

The informal characterisation of 'parameters' and 'latent variables' in terms of whether or not the quantities of each within a model increases as the number of observations in the data set grows.

Having blurred the distinction between a parameter and a latent variable above, sometimes authors will sharpen the distinction. For example on the same p475 of PRML, Bishop writes:

This example provides a nice illustration of the distinction between latent variables and parameters. Variables such as $\mathbf{z}_n$ that appear inside the plate are regarded as latent variables because the number of such variables grows with the size of the data set. By contrast, variables such as $\boldsymbol{\mu}$ that are outside the plate are fixed in number independently of the size of the data set, and so are regarded as parameters.

In practice the main difference is that parameters are usually fixed in number (independent of the size of your data), whereas latent variables are assumed to grow in number, since you usually have one per data case.

Very often in machine learning in particular, we may wish to introduce some additional structure into our probabilistic modelling, and we do this using latent variables. In this sense, a latent variable is an additional unobserved variable we introduce into the model for flexibility.

As you have seen in the Blei review paper and further to Xi'an's comment, there is in general no reason to expect there to be an association between the number of observations in a model, and the number of latent variables - ultimately it is for the context of the model and the responsibility of the modeller to specify this.

That being said, for many "conventional" models involving latent variables in machine learning (hidden Markov models, latent Dirichlet allocation, Bayesian mixture of Gaussians, the broader class of mixture models such as probablistic principal component analysis, sigmoid belief nets etc.), the additional flexibility and usefulness of these latent variable models derives from a natural association between the number of latent variables with the number of observations in the data set, so that as the latter grows in number, the former grows in number also.

As it is often the case that posterior inference in latent variable models cannot be exact, these models often require an approximate posterior inference method, of which variational inference is an instance of such method. Hence in the setting of variational inference, you may often observe a parity between the number of latent variables being used in the model, and the number of observations, as stated by Bishop and Murphy in the quotes above.

Observing the $n$-indexing on the local variables $z_{1:n}$, in contrast with the lack of indexing on the global variable $\beta$, these NeurIPs slides by Mohamed et al. show the general variational inference setup: 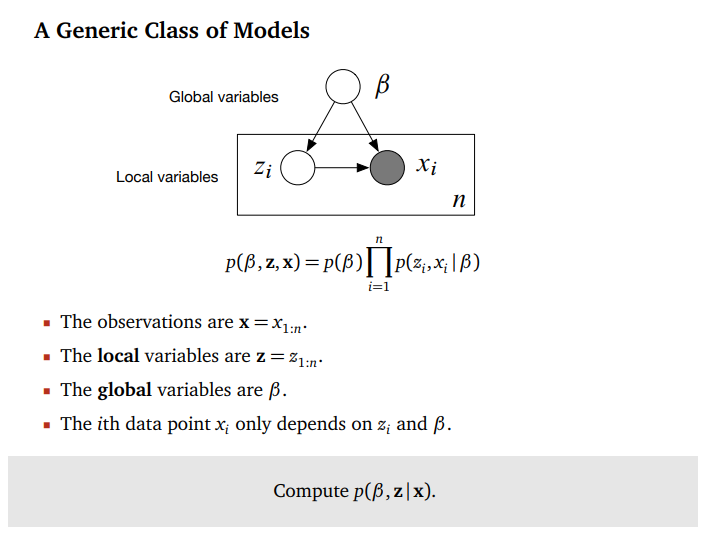 Variational inference approximates this posterior by using the "best" distribution within a family of distributions referred to as the mean-field family: 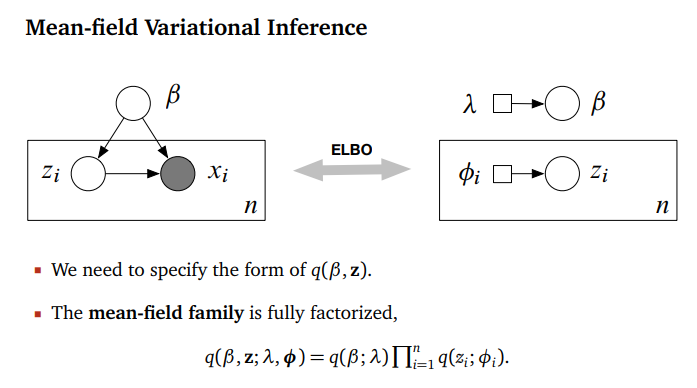 Hopefully, I've adequately conveyed that the distinction between parameters and latent variables in terms of whether quantities of each increase or decrease with data set size can be a useful one in the context of variational inference, and that an alternative way of making this distinction is between global and local variables.

The differences in how distinctions between latent variables and parameters are treated in the specific cases of expectation-maximisation and variational inference.

You ask in "what way the parameter vector is absorbed into $Z$" and allude to the following quotation from Bishop's PRML p463:

Bishop is not only remarking on notation, but is alluding to a broader point about the difference in how variational inference and EM draw distinctions between latent variables and parameters in a frequentist-Bayesian sense.

That is, he is saying that in variational inference, we do not draw a distinction between a parameter and a latent variable - as we are in a Bayesian setting, they are both treated as unobserved random variables. In this case we are interested in approximating a posterior over all unobserved random variables of interest, the latent variables $\mathbf{Z}$ and the parameters $\boldsymbol{\theta}$, given observed data $\mathbf{X}$:

To round this all off, this difference in how EM and variational inference treat latent variables and parameters, which Bishop is alluding to, is turned into an offhand, rather memorable claim about the "political philosophy of inference procedures" in Murphy's MLPP p753:

VBEM is also "egalitarian", since it treats parameters as "first class citizens", just like any other unknown quantity, whereas EM makes an artificial distinction between parameters and latent variables.

Not the answer you're looking for? Browse other questions tagged bayesian latent-variable variational-bayes approximate-bayesian-computation approximate-inference or ask your own question.

5
Why do we say EM is a partially non-Bayesian method?