I have two circular variables and I want to see if they're correlated.

The data comes from a hierarchical and unbalanced experimental design: each participant provided multiple responses and there's many missing data points.

Participants had to point to some distant place in a city. This variable has been transformed to range from -179.9 to +180 so that "0" always means correct pointing to a destination and 180 means pointing in the opposite direction. -10 would mean pointing 10 degrees to the left, etc.

The predictor is the angle of the street they were standing at during this pointing. It has been transformed in the same way, so "0" means that the street was heading exactly towards the destination; -90 would mean that the street was heading 90 degrees to the left relative to the destination, etc. There is only a limited number of streets, so this circular predictor is not evenly spread across the whole -179.9 - +180 scale. Many people were pointing from the same street, so the data is clustered. Also, some streets have many more pointings than others. 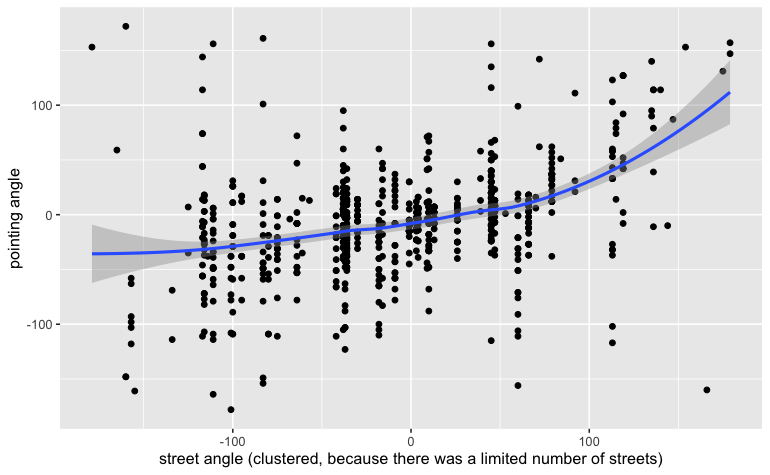 I understand that I need a hierarchical (multilevel) circular-circular regression. Here is what I have tried so far (in R) and why it doesn't do the job:

Of course I'm also open to using other packages, so will appreciate any hints! Thanks.

(Full disclosure: I wrote circglmbayes, but I actually recommend against it because it does not do hierarchical modeling.)

A final thing to consider is that you have what we would call an 'accuracy' design, where the focus is on deviation from a target angle. If you can live with thinking about the absolute deviation, you can essentially linearize the circular outcome. Then you could do the cos/sin transformation trick and use any other regular hierarchical package.

Not the answer you're looking for? Browse other questions tagged r regression multilevel-analysis hierarchical-bayesian circular-statistics or ask your own question.

4
When are circular statistics needed (reference)?