I would like to fit a model 'logistic-growth' or 'sigmoid growth' per exercise 'Try It #3' over on this online textbook (almost halfway down the page):

(a) Let $x$ represent time in years starting with $x=0$ for the year $1997$. Let $y$ represent the number of seals in thousands. Use logistic regression to fit a model to this data.
(b) Use the model to predict the seal population for the year 2020.
(c) To the nearest whole number, what is the limiting value of this model?

This post relates to question A. I would like to fit a 'logistic regression' model (presumably they mean logistic growth model).

Note this question comes from a pre calculus algebra textbook which should be indicative of my level of learning. I recently posted a similar question and someone commented with a link to a post on mixed effects modeling which was not helpful.

Over here the nls package is part of the chosen solution however nls package is no longer on cran. I made a comment there and it was suggested to use the nls function that ships with R.

data an optional data frame in which to evaluate the variables in formula and weights. Can also be a list or an environment, but not a matrix.

start a named list or named numeric vector of starting estimates. When start is missing (and formula is not a self-starting model, see selfStart), a very cheap guess for start is tried (if algorithm != "plinear").

control an optional list of control settings. See nls.control for the names of the settable control values and their effect.

algorithm character string specifying the algorithm to use. The default algorithm is a Gauss-Newton algorithm. Other possible values are "plinear" for the Golub-Pereyra algorithm for partially linear least-squares models and "port" for the ‘nl2sol’ algorithm from the Port library – see the references. Can be abbreviated.

trace logical value indicating if a trace of the iteration progress should be printed. Default is FALSE. If TRUE the residual (weighted) sum-of-squares and the parameter values are printed at the conclusion of each iteration. When the "plinear" algorithm is used, the conditional estimates of the linear parameters are printed after the nonlinear parameters. When the "port" algorithm is used the objective function value printed is half the residual (weighted) sum-of-squares.

subset an optional vector specifying a subset of observations to be used in the fitting process.

na.action a function which indicates what should happen when the data contain NAs. The default is set by the na.action setting of options, and is na.fail if that is unset. The ‘factory-fresh’ default is na.omit. Value na.exclude can be useful.

model logical. If true, the model frame is returned as part of the object. Default is FALSE.

lower, upper vectors of lower and upper bounds, replicated to be as long as start. If unspecified, all parameters are assumed to be unconstrained. Bounds can only be used with the "port" algorithm. They are ignored, with a warning, if given for other algorithms.

... Additional optional arguments. None are used at present.

Arguments subset and na.action are supported only when all the variables in the formula taken from data are of the same length: other cases give a warning.

Note that the anova method does not check that the models are nested: this cannot easily be done automatically, so use with care.

I see nothing about logistic growth there. But I gave it a try nonetheless:

How can I fit a logistic growth model per the textbook question using currently available R packages?

Have you tried using SSLogis in your nls call? Right now, you're just fitting a line, and the reason you're getting that error is because nls requires a symbolic variable in the passed formula.

This results in the following fit 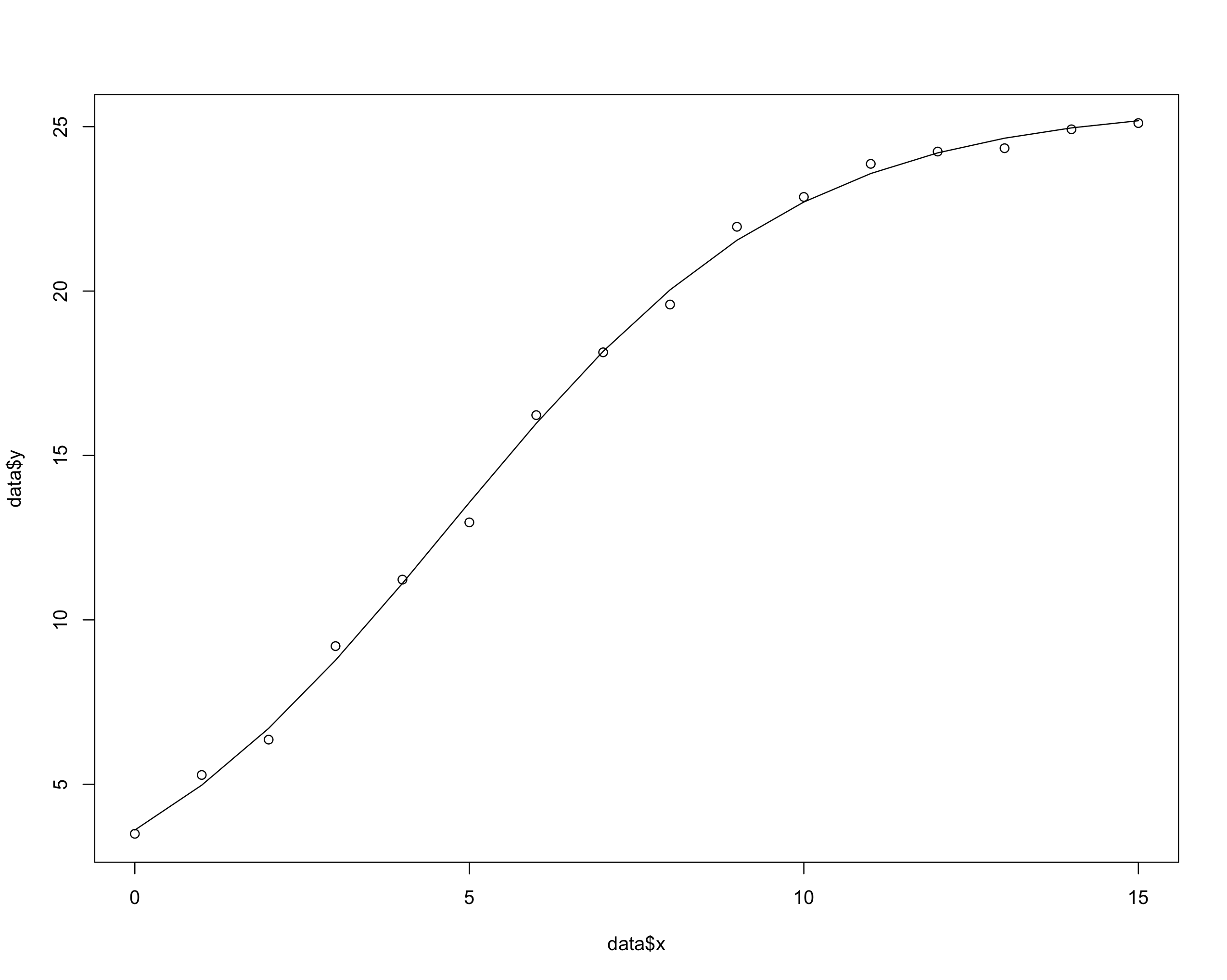 Not the answer you're looking for? Browse other questions tagged r sigmoid-curve logistic-curve or ask your own question.

24
What's the most pain-free way to fit logistic growth curves in R?
0
How to run a nls for multiple dependent variables?
0
Exponential growth curve similar to SSlogis?

6
How to analyse growth rate in R?
2
nls() gradient error in fitting growth curve data
4
What is the difference between a logistic curve and something that overshoots?
0
Finding the center of a logistic curve
1
Logistic regression not producing an s-shaped curve
3
What is the interpretation of the "C" parameter in the five parameters logistic curve?
7
Confidence Intervals for the Parameters of a Logistic Growth Curve
0
Exponential growth curve similar to SSlogis?