Is anybody aware of methods that are appropriate to modify the values of a time series to account for factors that are known to artificially inflate or deflate the measurement.

An example of the problem would be to see how the intelligence of a student changes over time.

We could test the student each week and their percentage score could be tracked, fomring a time series. Tests never truly capture intelligence so this time series will be noisy due to process error, and other factors effecting the test scores.

However there are certain factors we could measure that influence the test score, such as hours spent studying, or hours of sleep the night before taking the test. We could also measure the correlations between the values of these factors and test scores for a large population of students.

Is there any technique that could be used to smooth this time series so that it is more representative of the students true inner intelligence? So for example if the student studied abnormally higher for one week their test score would be decreased in the filter output to reflect that their measured intelligence (test percentage) was artificially inflated due to the extra time studying.

I recently learned about Kalman filters as they are good for dealing with noisy time-series, however I dont see any way to design the Kalman filter to make it 'smooth out' the effect of these external factors.

Is there any known modification to the Kalman Filter algorithm that would suit this problem, or maybe some other sort of bayesian filter?

What you mention is a well-known—and well-treated—problem in econometrics and social and behavioral sciences, and the solutions fall under (dynamic) structural equation modeling (SEM) and panel data analysis and further (latent) growth curve modeling.

The problem is, based on longitudinal data (multiple measurements over time) you want to make inferences about the relationships between stable (trait-like) and time-varying (state-like) latent variables, and some exogenous variables (time-invariant such as gender; or time-varying such as sleep) and some endogenous variables (e.g., time spent studying, since it can be affected by previous test score). You, then, would want to distinguish between within-person and between-person differences.

A note on terminology:

For the cases where you have a few measurements of many people ($T << N$), the data is often called panel data, and if the number of measurement occasions is large, especially compared to the number of persons ($T >> N$), then you say you have a intensive longitudinal data (ILD) and use time series analysis.

What models can I use?

There are dozens of models capable of doing that, and you can choose one depending on your assumptions and research questions. I believe a latent trait-state-occasion model would be an appropriate model for your problem, and I highly suggest reading this paper (available on SciHub):

In this model, your items (questions in IQ test) administered at different times (or "waves"), and you assume that the differences in responses at times $t$ are caused by person-specific trait factor $T$ and occasion-specific latent variables $O_t$. The latent variables $O_t$ can be replaced by any endogenous (and perhaps, exogenous) variable. If you assume time-invariant model, you may fix the autoregression effects to be equal $\beta_1, \beta_2, \ldots, \beta_{J-1} = \beta$, and you can set them to zero to eliminate any temporal relation. 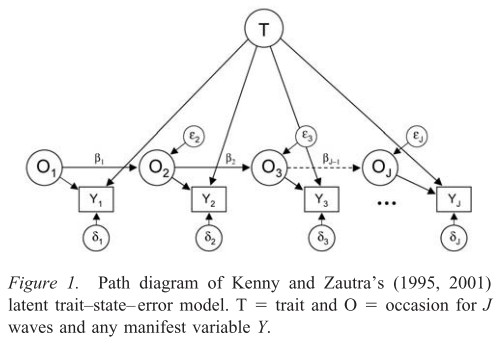 In this model, you assume the items are measuring students' current ability at answering the administered test ($S_t$). The $S_t$'s are affected by previous abilities of the student ($S_{t-1}$), contextual/occasion-specific factors ($O_t$), and an underlying time-invariant trait ($T$) that equally influences the student's ability at all times. 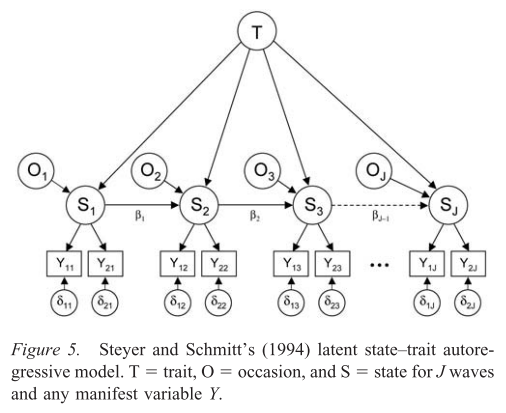 This is quite similar to the previous model, except that you assume here that the temporal dependencies between states $S_t$ (ability at different times) lie in temporal dependence between occasions (e.g., the student studying/sleep have some sort of autoregressive nature). 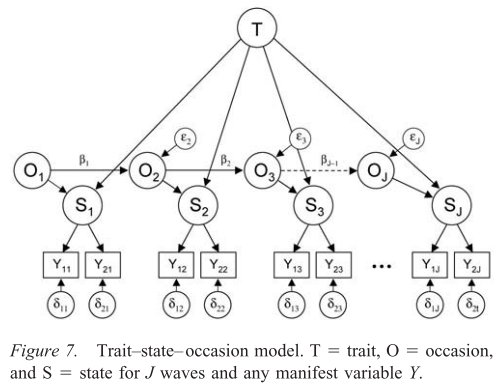 Which model should I choose?

The choice of the model is heavily determined by your hypothesized relationships. In case you do not have specific hypotheses to test, you can "let the data speak for itself" and favor one model over the other based on (and choose/identify the "best-fitting model") based on SEM fit indices or information criteria (e.g., AICc or BIC).

How to use these models?

By fitting these models, you get parameter estimates for factor loadings, (co)variances, and AR effects. You can then feed the (preferred) models with students' responses to estimate their latent variables, which are now decomposed into their stable trait and time-specific factors (occasion/context and/or abilities).

You may want to look into the following books for longitudinal structural equation models:

You should be extremely careful if you want to make inferences about cross-lagged relationships (e.g., if you want to see if sleep and studying affect each other over time). This is not what you want to do here, but this is an extremely important matter, and I suggest reading this paper on it:

In case you have intensive longitudinal data (with too many measurements; not feasible for intelligence testing), you may want to use dynamic structural equation modeling (DSEM). See this paper:

Not the answer you're looking for? Browse other questions tagged time-series bayesian bayesian-network kalman-filter latent-variable or ask your own question.

11
How to model a biased coin with time varying bias?
3
Forecasting model inputs that are both auto-correlated and are calibrated over time?
3
Time-series machine learning methods and R packages
2
Tests for statistical significance of Kalman Filter estimate
4
Why is my kalman filter trusting so much my observations?
5
Efficient forecasting of daily and weekly seasonality in minute data