I am doing a Kruskal-wallis test and am wondering which post-hoc analysis is the most suitable for this? Been reading around and saw people recommend Dunn test. I am just wondering if there is any specific reason to not choosing something like Wilcoxon as they both non-parametric?

As noted, in copious other places on Cross Validated, the Mann-Whitney (aka Mann-Whitney-Wilcoxon) rank sum test is inappropriate as a post hoc test following rejection of a Kruskal-Wallis test for two reasons:

In R, 'notches' in the sides of boxes of boxplots are confidence intervals for group medians roughly calibrated so that, in comparing two groups, non-overlapping notches suggest significant differences in medians. So we guess than a Kruskal-Wallis test will show differences in locations among the five groups. 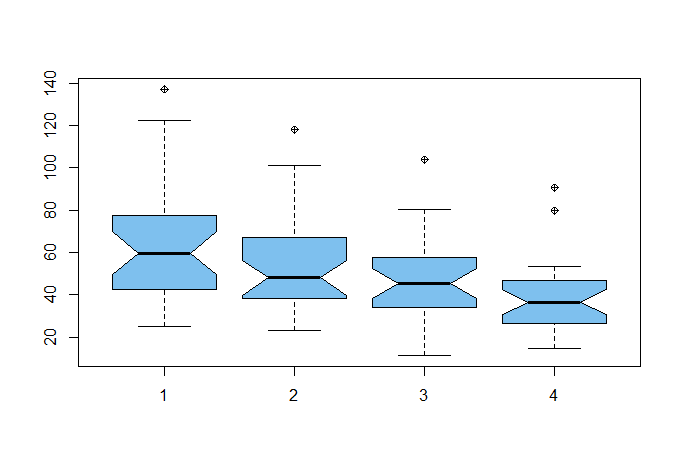 Ad hoc, two-sample Wilcoxon (signed rank) tests show some differences. The most obvious candidate for a significant difference is Group 1 vs. Group 5.

Some other paired comparisons between groups are show significant differences and some do not:

Beyond the obvious comparison, I have done five tests, so the Bonferroni method of avoiding 'false discovery' would insist of P-values below $0.01$ in order to be considered significant. Here that amounts to finding significances only between Gp2 & Gp4.

Because we are using simulated data we know that with sufficiently large sample sizes in groups we might have found differences between Gp 1 & Gp3, Gp 1 & Gp 2, and Gp 3 & Gp 4, but according to the Bonferroni criterion we did not.

With any scheme of ad hoc comparisons, it is unrealistic to expect to recover the exact true pattern of differences, unless a power and sample size procedure has prompted use of enough replications in each group to give sufficient power for that result.

Because the the four samples are not obviously of the same 'shape' some might say that the Kruskal and Wilcoxon tests are looking at stochastic domination instead of shift of location. (Very roughly, one distribution dominates another if it tends to give larger values than the other.) By showing empirical CDF (ECDF) plots of the four groups we can try to judge stochastic domination. A dominant sample will tend to have larger values; hence its ECDF will fall consistently below that of another sample. Here are ECDF plots for the four groups in the current example (colors red, brown, green and blue for groups 1 through 4, respectively). 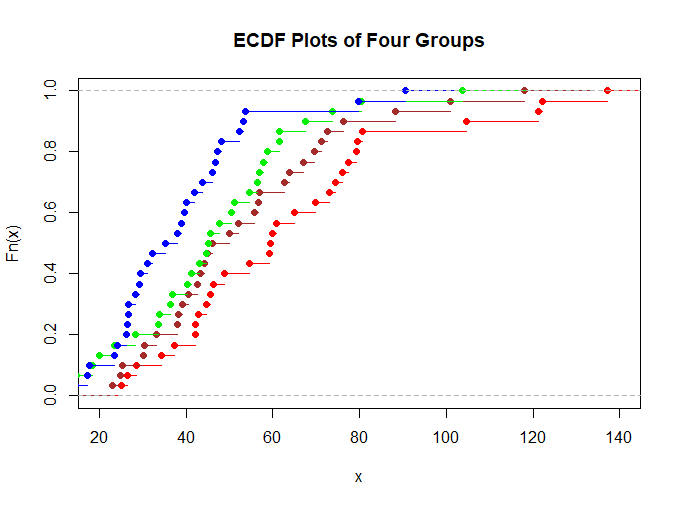 Not the answer you're looking for? Browse other questions tagged hypothesis-testing multiple-comparisons kruskal-wallis-test or ask your own question.