Can I compare the outputs from the three paired t-tests? From these independent tests can I already say that drug 1 and drug 2 are more effective than the placebo drug?

Edit: The problem with repeated measures ANOVA, is that if I added a variable time with $t_1$ (before) and $t_2$ (after), the model would assume that $t_1$ was already depending on the group. For example, if my data looks like this:

Doesn't the ANOVA think that the value measured at $t_1$ is already being affected by the drug type? This is a problem because at $t_1$ none of the drugs are affecting because that measure is BEFORE the drug administration. I think the only way here is to do paired t-tests. However, how can I compare them?

This problem would also be more complex if I needed to add another variable, for example a variable for gender (male and female) to check if gender also affects the treatment?

Using the difference between t2 and t1 as feature should work; one can use ANOVA to test the equality of the means.

Note that there are post-hoc tests that allow you to get more insight into the differences, if any, found. This allows you to identify which means deviate. These post-hoc tests take into account that multiple test are being made; i.e. 'Bonferroni test' included.

You can also use a two way ANOVA if you want to add gender as second variable.

Would you want to add more variables, you could try to setup the tests as a hierarchical linear regression problem with dummy variables. Starting out with a model with a single mean, and comparing this model to one that has two dummy variables for the experimental conditions would give you the answer you want. The smaller and the larger model can be compared because the models are considered hierarchical; i.e. the larger model extends the smaller model.

Using an extra dummy for gender, and potentially dummies for interaction effects for gender x treatment, one can squeeze a lot of information out of the data. Note that one has to apply some Bonferroni type correction in this case. One would like to do some kind of power analysis upfront to see if the sample size sustains multiple testing without loosing to much power.

Dunnett's test is the canonical test for a one-way ANOVA of various treatments versus control. It has slightly more statistical power compared to multiple independent t-tests with Bonferoni corrections under the baseline assumptions.

Any good design of experiments text book will have a discussion of a one-way ANOVA and Dunnett's test. See this STATS 503 class: https://online.stat.psu.edu/stat503/lesson/3/3.1

Here is an example analysis in R code: 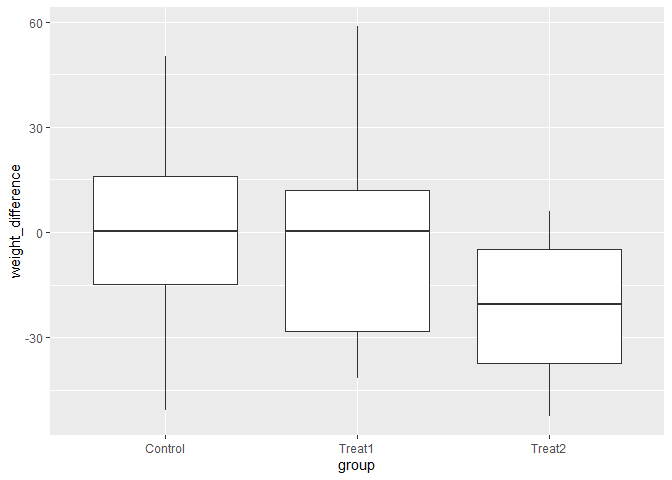 There is no reason you cannot just apply ANOVA with a standard regression model in this case. Taking three seperate T-tests and combining them into a single inference is inferior to conducting a single ANOVA with a model that includes data from all the groups. In regard to your concerns about ANOVA, it is important to note that ANOVA is a method of analysis, not a model (see e.g., here). It can be applied to a linear regression model irrespective of the particular terms and interactions you include or exclude from your model.

The simplest way to undertake this kind of analysis with your data would be to form a new variable for the weight difference (i.e., weight at the later time minus weight at the earlier time). You can easily form a linear regression model with the drug as your sole explanatory variable and the weight difference as your response variable. The model formula (in R notation) would be:

If you form a model like this then you can easily apply ANOVA to test whether or not there is a statistical relationship between the drug variable and the weight.diff variable. It is best to do a holistic ANOVA for all groups first, and then proceed down to individual tests afterward, with proper consideration of multiple comparisons. Note also that one thing that is important in this kind of work is for your drug allocations to be randomised so that you are doing an Randomised Controlled Trial (RCT). Randomisation of your drug allocations, and use of placebos for the control group, should ensure that your drug variable is not statistically dependent with any possible confounding factors, which allows you to make causal inferences from your statistical inferences.

Instead of comparing the start and end weights as a pair, compare the difference between the two. I.e, for every participant, subtract the end from the start, and run an ANOVA on that value.

If you compare multiple independent t-test(s) you should counteract the multiple comparison problem.

If you want to go down this path, one way to tackle the multi comparison problem is to use theBonferroni correction but others are available. you can find a bunch of them here.

Instead of doing ANOVA, I want to make three independent paired t-tests, i.e, one paired t-test for each one of the groups (measuring weight before and weight after). ... Can I compare the outputs from the three paired t-tests?

You can do this with Tukey's range method

It is actually relatively similar and there are similar rejection regions (similar for rejecting the null hypothesis $\mu_1=\mu_2=\mu_3$ Tukey's method versus anova).

The F-statistic in anova can be computed from the t-statistics (when these are computed with the pooled standard deviation).

With Tukey's method you are regarding the maximum of the absolute value of the t-statistics.

The method is more complex with ordering of the means and finding groups with significant differences, but the control of the FWER is done based on this maximum range. (While this test is often performed as a post-hoc test for ANOVA, you do not need to do ANOVA before Tukey's method. The FWER is controlled by using the studentized range distribution for the cutoff for $q$.)

Below is a simulation assuming the populations are normal distributed with equal variances and equal means.

We plot two out of the three t-statistics (from $10^4$ different simulations). The third t-statistic is fully dependent on these two. 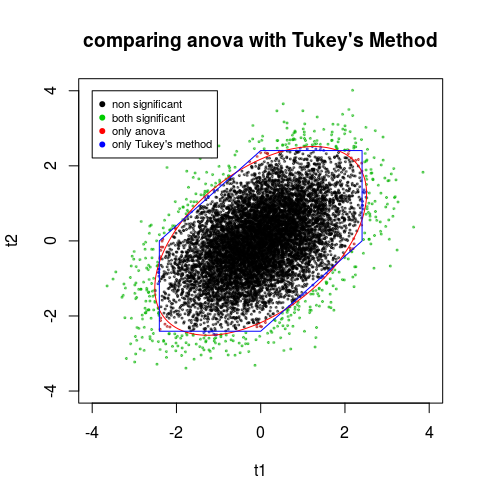 This problem would also be more complex if I needed to add another variable, for example a variable for gender (male and female) to check if gender also affects the treatment.

The most easy would be to formulate this as a linear model and use variance (F-test/anova) or parameter estimates (t-test) to describe the significance. (Effectively these will be the same, anova and t-tests give the same results)

If you are more interested in only a few out of all possible comparisons of means, and/or if you are interested in one sided alternative hypotheses ($H_0: \text{not effective}$ versus $H_a: \text{effective and more specifically weight reducing}$), then you can change the rejection boundaries of the t-test (e.g. use 1 sided t-tests and ignore the 3rd t-statistic for difference between treatments). The result is Dunnett's test, which R Carnell speaks about in their answer, which will be a more powerful test.

Not the answer you're looking for? Browse other questions tagged anova t-test repeated-measures multiple-comparisons paired-data or ask your own question.

1
ANOVA or multiple t-tests when comparing pre-existing group means?
2
Should I use paired t-tests or ANOVA when comparing multiple variables from 2 tests?
0
Nested paired tests
1
Should I use two-way ANOVA or some kind of paired t-test to compare response to treatment?
1
Comparing mean test scores (different tests, same group)
3
Unpaired or paired T-test when comparing before and after effects between two groups
0
Post hoc analysis after two-way repeated measures ANOVA
5
Paired and repeated measures! Now what? ANOVA or mixed model?