what's the difference between hypothesis function outputed by algorithm A and polynomial function in the book,"foundations of machine learning"

I am on the 28 page of the book called "foundations of machine learning" by M.Mohri which contains this(in the iamge below) defination of the PAC learning framework.I am a bit coufused about what exactly is the polynomial function and why are they passing those parameters(size(c),inverse of delta etc), and how different it is from the hypothesis function outputed by the algorithm A(as specified in the book). 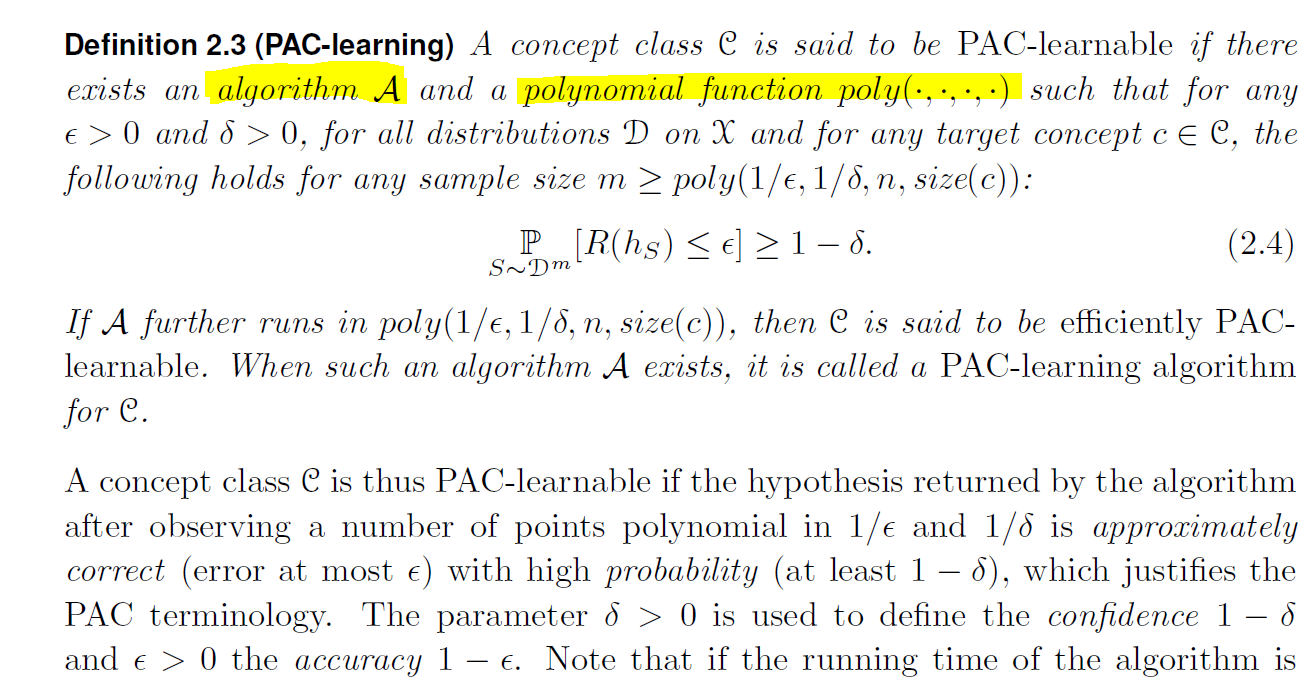 The term polynomial function and $poly(1/\epsilon, 1/\delta, n, size(c))$ should not be confused with the above hypothesis $h$, or equivalently, the function $f$; rather, it is a way of specifying the sample complexity of the algorithm $\mathcal{A}$ - think little-Oh and big-Oh notation. Further, each of the arguments in the function $poly(\cdot, \cdot, \cdot, \cdot)$ should not be thought of as parameters in the sense that $\theta$ is a parameter. And that is because those arguments do not parametrise a statistical model in any conventional sense.

The sample complexity, that is, the term on right hand side of the inequality

is the minimum number of samples required for the bound in $(2.4)$ to hold.

Interpreting the first part of the definition.

If you can find a learning algorithm $\mathcal{A}$ and a polynomial function in your accuracy $\epsilon$, confidence $\delta$, $n$, and the size of the concept class $\mathcal{C}$ such that for any sample size $m$ greater than $poly(1/\epsilon, 1/\delta, n, size(c))$, the bound in $(2.4)$ holds, then your concept class is called PAC-learnable.

Lastly, I can see how this definition might seem somewhat terse and abstract - consider looking at the examples later in the book, and also order and stochastic order notation i.e. $o(\cdot), O(\cdot), o_P(\cdot), O_P(\cdot)$. It is these entities whose functional forms are being described with terms like $poly(...)$ and $exp(...)$. In my view, fluently understanding these distinctions is important for fully appreciating the arguments made in the book, as this definition shows. It is surprising therefore to not see at least a small note on this somewhere in the Appendix of the book.

A useful nuance to be aware of early, particularly when you start reading more papers in this area, is that statisticians tend to speak of generalisation error, that is, the rate at which the empirical risk converges to the risk as the number of samples increases; whereas computer scientists and those in PAC-learning on the other hand speak in terms sample complexity, that is, the minimum number of samples for an algorithm to be a PAC-learning algorithm. Whilst these perspectives are mathematically equivalent, the former requires stochastic order notation, that is, $o_P (\cdot)$ and $O_P (\cdot)$ notation, the probabilistic cousins of $o(\cdot)$ and $O(\cdot)$.

Here are some other references to supplement the Mohri book on PAC learning if it seems terse:

Not the answer you're looking for? Browse other questions tagged machine-learning predictive-models modeling pac-learning or ask your own question.

6
Linear Regression Intuition behind least squares
5
What is meant by effective parameters in machine learning
2
How can I understand the multiclass verison of "shattering" intuitively?
1
Why sample complexity must be polynomial for PAC learning?
1
how is the expectation of the empirical error based on an i.i.d. sample S is equal to the generalization error?
2
What is an "ERM rule" in Understanding Machine Learning by Shai Shalev-Shwartz et al.?