Below I am showing the kernel density with the size of the informal economy, and would appreciate support on interpreting this. For instance, what does the of the Kdensity line around .017 represent relative to the normal density line? 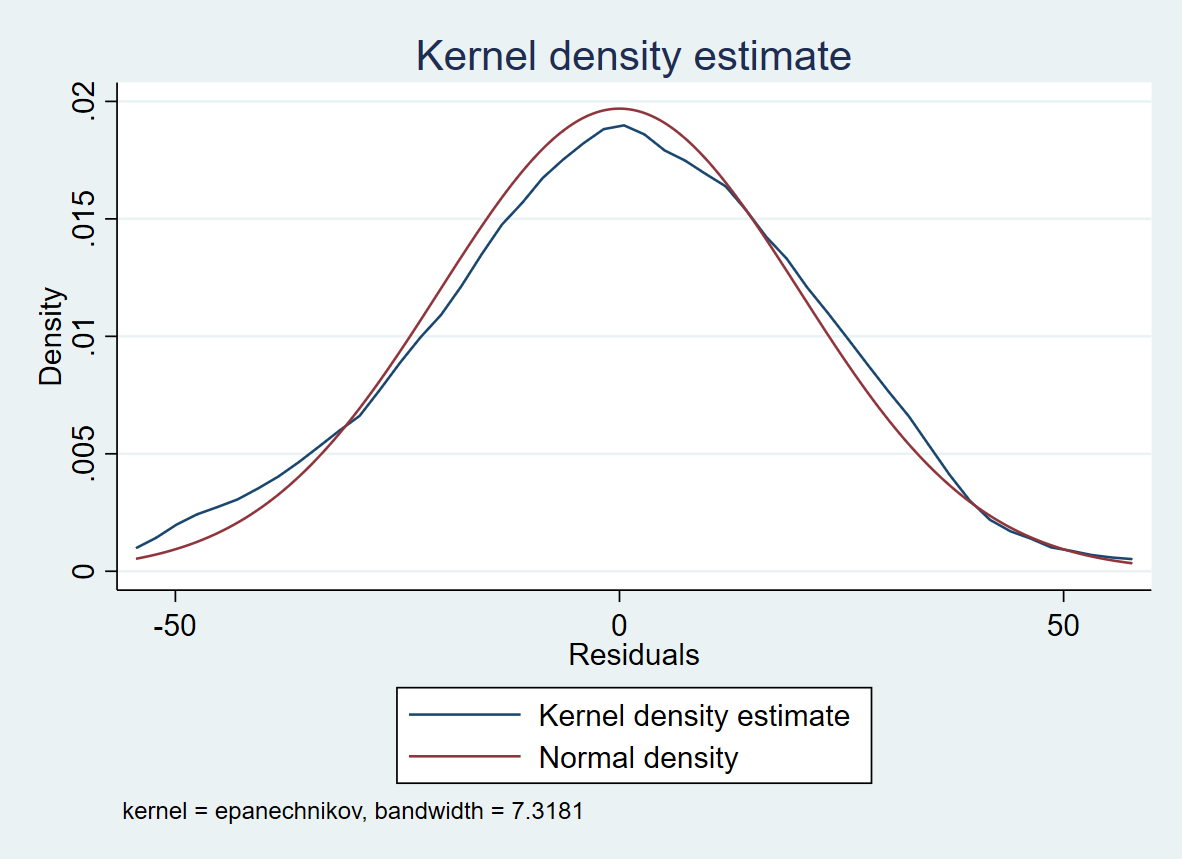 Given a random sample from a population, a kernel density estimator (KDE) seeks to estimate the density function of the population distribution. You can read Wikipedia's article on KDEs or various other Internet pages for details of how a KDE is formed. (I have found referenced papers by Silverman to be extraordinarily clear.)

Roughly speaking, one chooses the shape of a 'kernel' density (often normal, sometimes uniform or others) and then makes a mixture of several such distributions as the KDE. The smaller the bandwidth, the more the components of the mixture. Results are often smoother than you get by trying to estimate a density function using a histogram. You can think of a KDE as a 'smoothed histogram', but the KDE works entirely independently of the histogram.

If you have a large sample, you will generally get a KDE that comes closer to the density function of the population.

Here is a histogram of the sample, a graph of the density function of $\mathsf{Gamma}(5, .1)$ [dotted black], individual observations [tick marks], and the default KDE from R [solid brown].

With obvious changes in the R code, here is a similar plot with $n = 10\,000$ observations. Here we have used KDEs with bandwidths half (with parameter 'adj=.5' in 'density') and double the default size.

The narrower bandwidth (green) is not smooth near the mode, the wider bandwidth (red) is not quite right in the lower tail. Either KDE is better than the histogram with about 20 bins. In my experience, the default bandwidth in R is about right. (Default gaussian kernels are used throughout.)

R does not report the exact bandwidth it uses. I am happy to consider the bandwidth as as a technical matter and have found it more useful to see how well the KDE matches a histogram (or the true density curve, if known).

Not the answer you're looking for? Browse other questions tagged regression econometrics density-estimation or ask your own question.

4
Fast multivariate unimodal density estimator
0
Why does definition of kernel include bandwidth?
4
Assessing the quality of a density estimate without knowing the true density
0
Bandwidth parameters in multivariate KDE using scipy.stats.gaussian_kde
10
Kernel density estimation and boundary bias
1
How to plot density for repeated k-fold cross validation?