There are two variables. If they are not significant, can they be interaction items? [duplicate]

Ask Question
Asked 1 month ago
Active 1 month ago
Viewed 60 times
0
$\begingroup$
This question already has answers here:
Including the interaction but not the main effects in a model (18 answers)
Closed last month.

In short: yes. When two variables A and B are in the model together with their interaction, the interpretation of the simple effects (A and B) changes. They are interpreted as conditional effects. With the interaction term added, A would be interpreted as the effect of A when B is zero, and B would be interpreted as the effect of B when A is zero. So it is perfectly possible and normal for a significant main effect to become non-significant when an interaction is added, simply because the slopes are not significantly different at value zero. If zero is outside the range of your variables, then you simply cannot meaningfully interpret the individual A and B coeffcients in the presence of an interaction. A possible solution is either to mean center A and B, so that the conditional effect is conditioned on the mean instead of zero, or (in case A and B are categorical) use main effect coding instead of dummy coding. That way, A and B still estimate main effects.

Here is a toy example of the kind of crossover-interaction I referred to in my comment below:

If you run a factorial ANOVA or multiple regression, testing for the effect of A, B and A*B, you will see that neither A nor B are significant, but their interaction is very highly significant. This is also indicated by the profile plot showing there is a crossover interaction: 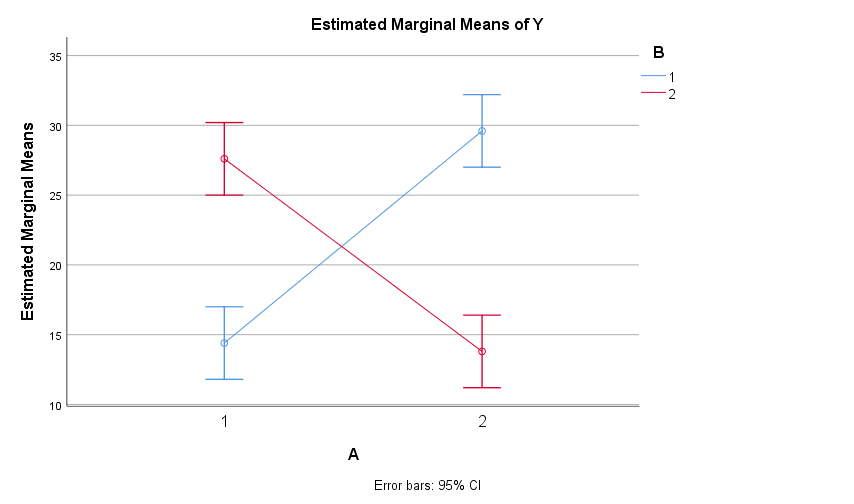 In this case, you can't claim that Variable A (horizontal axis) has an overall effect, because none of its levels (1 or 2) has a consistently higher mean than the other (21, 21.70). For B, the situation is the same, it does not have a significant overall effect (22, 20.70)

But the significant interaction tells you that the effect of B is opposite for the two levels of A, or the other way around. For a silly example, imagine that the two levels of A are Normal and Overweight, and the two levels of B are "Older" and "Younger". The dependent variable, Y, is chocolate consumption. At baseline (normal weight) older kids consume more chocolate, but for overweight kids, the difference switches direction. Older kids become self-conscious about their weight, and start eating less chocolate, while younger kids don't care, or are not aware of the problem, and eat even more. If you average over Younger-Older and Normal-Overweight, you will see no effect. But the interaction is significant, and it is meaningful, you can report and interpret it.

This model has no main effect and only interaction effects. Therefore if you rejected any relationship based on a non-signifiant linear relationship would would have been mislead. That being said, fitting an interaction only model is not conventional.

You could try fitting

this is a slightly different version of the original model. This is a linear model but if both $\log A$ and $\log B$ are significant then this suggests a multiplicative (interaction) relationship.

Not the answer you're looking for? Browse other questions tagged interaction or ask your own question.