I am a complete newbie to statistics, and have gotten stuck on a difficult real-world problem.

To visualize the problem, I have removed time zone information from the second action timestamps, subtracted the two, and taken the mod 60 value of the result, to represent the "minute within the hour" of the difference. This results in a histogram that looks like this: 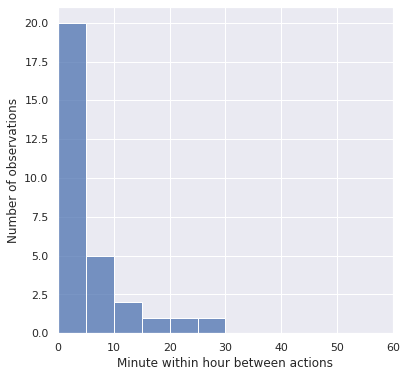 Just from a visual examination, I feel confident that the time between the actions was less than an hour (usually around 5 minutes, as opposed to an hour and five minutes, two hours and five minutes... etc) but I don't know how to express this confidence quantitatively. I'm having a bit of trouble determining what the null hypothesis would be, here. Any insight would be greatly appreciated!

user317951user317951
1
New contributor
user317951 is a new contributor to this site. Take care in asking for clarification, commenting, and answering. Check out our Code of Conduct.
$\endgroup$
2
Add a comment  |

Browse other questions tagged time-series distributions p-value or ask your own question.