I am trying to do a difference-In-differences (DiD) regression with fixed effects. The regression is meant to estimate the impact of participating in a televised Sports Event on the Social Media Follower Count of the participating teams, compared to other teams that did not participate. 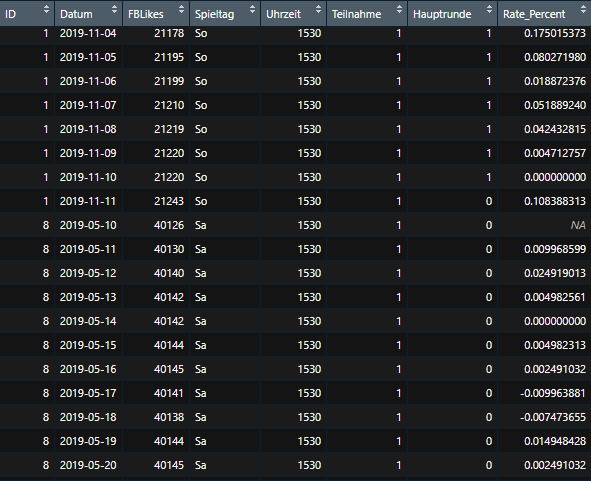 The dependent variable is the Rate_Percent, which is the growth rate of Facebook-Likes, which is calculated as follows:

The factor(ID) seems to mess things up. It is supposed to be a fixed effect dummy for each $n$.

Now, my questions are as follows:

The summary looks far from correct, but I can't find my mistakes, what did I do wrong?

It doesn't appear you did anything wrong. Software simply dropped the redundant regressors. In your setting, it shouldn't affect the difference-in-differences coefficient.

The variables that R drops is merely an artifact of your ordering scheme. In the model formula, the individual fixed effects are specified last. R cannot estimable all individual-specific intercepts if they are preceded by a time-constant treatment indicator; one additional individual effect must be dropped as a compromise. Conversely, if the individual fixed effects were specified first, then they would absorb Teilnahme. Try out the latter approach; it will completely absorb any dummy representing group membership. Note: neither situation affects the estimate on your interaction term.

The example code below shows three ways of estimating your equation. Your interaction term should remain unaffected by these alternative specifications.

Even though collinearity is present, it shouldn't affect your interaction term.

To be clear, you're estimating the classical difference-in-differences equation where some intervention impacts all treated entities at the same time. Your code may be simplified as following:

The constituent terms will be estimated without any additional work on your part. The code is much more concise and should produce equivalent results.

Is this the correct way to use fixed effects?

Technically, a difference-in-differences model is a "within" model. It is perfectly permissible to estimate it using unit and/or time fixed effects. For reporting purposes, I would omit the individual fixed effects entirely; they're nuisance. The interaction term is what counts.

I know "Coefficients: (6 not defined because of singularities)" indicates a strong correlation between my independent variables. But when I don't use the factor(ID) in the regression, the coefficients are there.

What you have is perfect collinearity. But for this application, it isn't a problem. As for your other dummies (e.g., Spieltag), it appears the "participation time" is a fixed attribute of each individual. It doesn't vary over time! The individual fixed effects already account for this. You can safely drop these from your analysis.

As a final word, it is often good practice to assign variable names that are easy to identify just by looking at your equation. For example, I recommend renaming Hauptrunde to something like post or after. It may seem unnecessary, but it's often helpful to others reviewing your post.

Not the answer you're looking for? Browse other questions tagged r fixed-effects-model difference-in-difference or ask your own question.