I am very much new to dealing with this type of data (polar coordinates!) and it would be great if someone could help me out.

My data come from an experiment in which I had 66 different pairs of bacterial strains of which I wanted to study the interactions. In order to study the effect of each strain on the other I compared the abundance of each strain when it was alone if compared to when it was paired with the other strain. So for example I calculated the effect of strain A on strain B and the effect of strain B on strain A. This gave me a point with the coordinates corresponding to the effect of A on B and B on A for each of my pairs. I converted these data into polar coordinates and I obtained this type of dataset:

I would like to do statistics to have a measure of the significance of the interactions between each strain. I thought I could determine if, for each treatment and across replicates, the distance from centre measure (radius) and the angle measure (theta) are significant (i.e. significantly different from 0). I am aware of the package "circular" but I am not sure of how to use it/which test could be useful for my case.

Any suggestion (also reading material!) would be very useful. 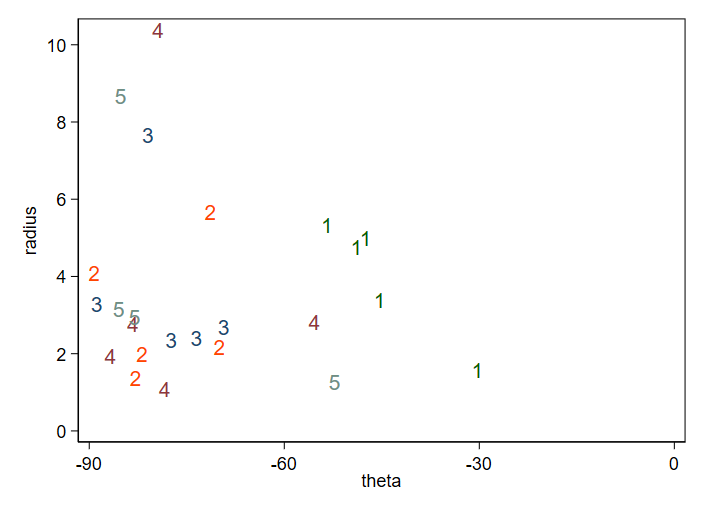 You may have many more data points, but scrutiny of a quick plot suggests

Good statistical advice is very hard to give with no context whatsoever on what the numbers represent (other than something in polar coordinates).

EDIT Given more information and the full dataset, I can try a little more.

Disclaimer. I don't understand the science here and I don't even understand what kind of statistical problem this is. So why say more? I have some experience with circular data, which many statistical people don't have at all, so perhaps something a little helpful can be said.

The full dataset is 315 observations on 66 treatments, the latter represented by 5 observations in most instances, but only 3 or 4 in some (thus that's why not 330).

I can readily imagine that this represents a great deal of hard experimental work, but unfortunately from a statistical point of view 3, 4 or 5 observations is a very small sub-sample size for saying much reliably about individual treatments.

Circular plots may seem natural given the outcome space, but there can be a chicken and egg question that you have to look at several before you can think easily about any one (unless perhaps you already have some experience of thinking in and about that space, as is often true of compass direction). That aside, I have found that linear plots can be very helpful too, which runs a little contrary to the advice in circular statistics texts and reviews.

A plot of the full data shows that they too seem limited, but now to half the circle. Is there any sense in which $90^\circ = -90^\circ$, because that would be an important detail? It affects what kind of test might make sense, but "typical" theta, however measured, is a long way from zero.

Another plot plots all of the data repeatedly, but a little arbitrarily picks out 4 treatments as extreme in either median or median absolute deviation on radius, theta or both. That's cherry-picking and nothing to do any formal testing. 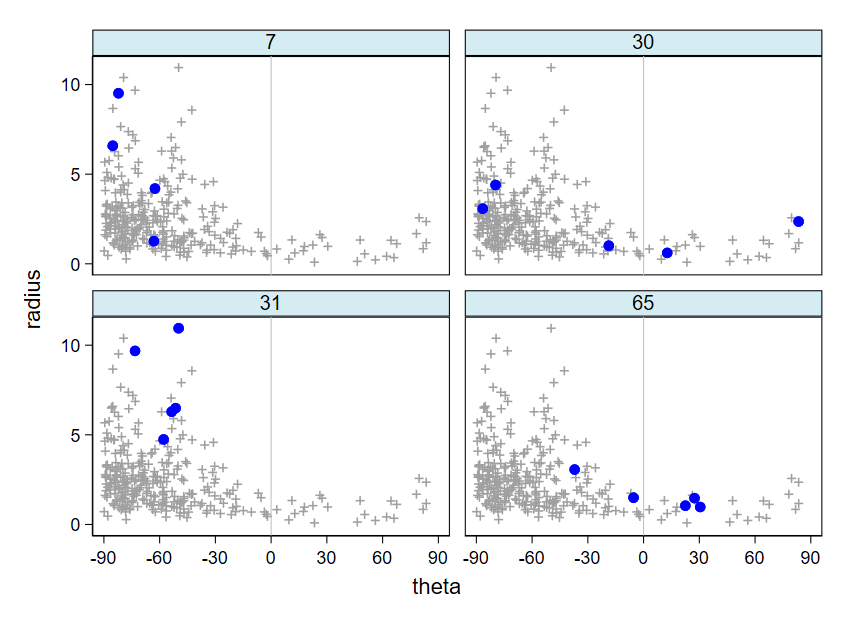 It is unclear what sort of statistical analysis you are doing, but you will most likely not need to bother yourself with circular statistics like circular distributions. This is because you are using an angle to express/illustrate the effects, but the angle is not an underlying mechanism in the distribution of the observations.

In the plot below you have the data in cartesian coordinates. The first six interactions are colored to give an impression of the variation within a single group. 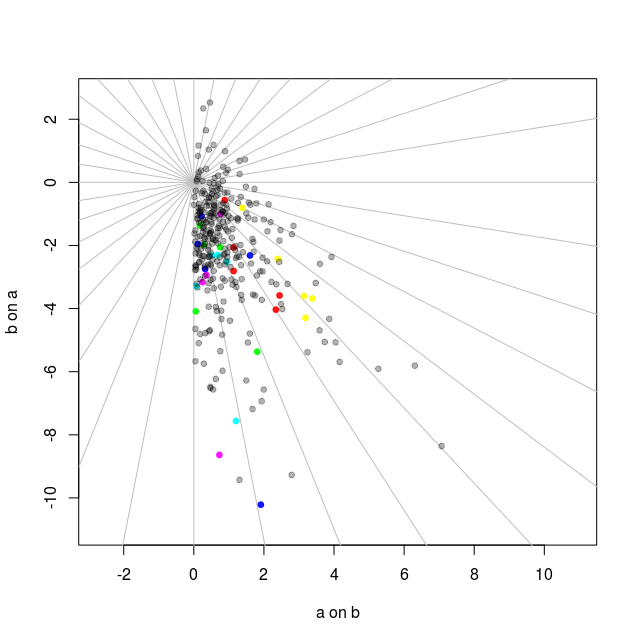 Not the answer you're looking for? Browse other questions tagged r circular-statistics or ask your own question.