Is this the right test (alongwith the current parameters) to determine what I want or is there a more appropriate test for this?

The total number of such choices of $B$ and $C$ is

and they are all equally likely. Summing over the possible values of $l$ gives the probability that the mutual intersection $A\cap B\cap C$ has exactly $m$ elements: 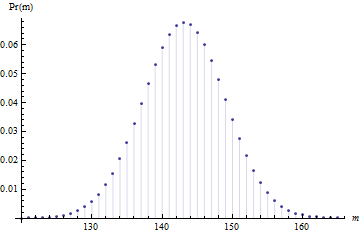 By summing these values from a particular value $m_0$ on up, we obtain the probability that the cardinality of the triple intersection equals or exceeds $m_0$. 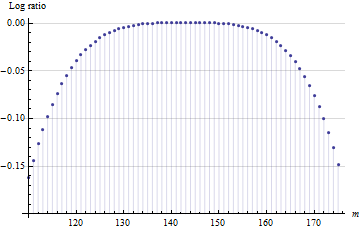 The mean is near $143$ and the SD is near $5.9$. (As usual, these are computed by summing $m$ and $m^2$, as weighted by the probabilities, to obtain the raw first and second moments, etc. I have not found a way to estimate either value a priori using simple formulas, but they can be estimated by computing probabilities for a small carefully-chosen selection of values of $m$ and fitting a Normal curve to them.) Evidently, the approximation is excellent (in this case) within one SD of the mean, after which it starts decreasing, but even at three SD from the mean (i.e., around $125$ or $161$) it is still within one or two percent of the correct value. For instance, the Normal approximation suggests the chance that $m \le 135$ is $0.939$ whereas the correct value is $0.928$.

In cases where there is a narrow range of possibilities of $m$, the distribution is far from Normal--but fortunately then the summations are short. For instance, here is the distribution for $n=145, a=b=c=140$: 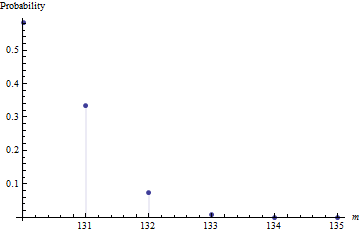 A simulation of $10^5$ independent instances of this situation tallies closely: 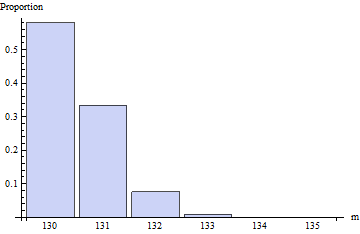 Not the answer you're looking for? Browse other questions tagged r probability chi-squared-test contingency-tables or ask your own question.