When reading about the LDA, the generative procedure for a document is often presented as follows:

Having estimated my own LDA-model on a textual corpus, there is one point I don't quite get here: My estimated topics are distributions over words, but the distributions differ among the topics - some are sharply peaked around only a few words, while others are more broadly distributed over words. This is despite having fixed $\alpha$ to be a scalar.

My question is: When I fix $\alpha$ to be a scalar, then how come the profile of word-distributions of my topics can differ? How can some be sharply peaked, but others more broad? I would think that the profiles should be more or less identical since $\alpha$ is a scalar.

I think it would be helpful in this instance to draw a distinction between:

1. How the hyperparametrisation encodes prior beliefs about the topic vectors $\phi_k$ sampled from the Dirichlet prior $p(\phi_k | \alpha)$, before any inference is conducted.

2. The outcome of approximate posterior inference (either estimated topic vectors or a distribution on topic vectors, depending on further context).

I will focus on 1. as your question suggests that there is something you might have missed in your understanding of this.

I cannot appropriately comment on 2. in any specificity as it would require more context on the kind of variational inference being implemented under the hood of the software package you are using, and because it's difficult to say anything specific without recourse to the data. This is where the crux of your question lies, so I will try and update this answer after more context has been supplied, as requested in comments.

How can some [profiles of topics $\phi_k$] be sharply peaked, but others more broad? I would think that the profiles should be more or less identical since $\alpha$ is a scalar.

Notationally I am going to define $\boldsymbol{\alpha} \in \mathbb{R}^V$ to be a vector hyperparameter, with $V$ positive components $\alpha_v > 0$ for each of $V$ vocabulary words.

When we specify that $\boldsymbol{\alpha}$ is a scalar $\alpha$, we mean that all for all $V$ components, $\alpha_v = \alpha$. When this is the case we refer to it as a symmetric Dirichlet distribution, or in the terminology of the original paper, an exchangeable Dirichlet distribution (see footnote 2 on page 1006).

With these distinctions in mind:

1. For symmetric Dirichlet distributions, it is the magnitude of the scalar $\alpha$ that controls the sparsity of the topic vector $\phi_k$.

What you have omitted is that sparsity is not encoded by whether a Dirichlet distribution is symmetric alone, rather it is encoded by the magnitude of $\alpha$.

In your context, the symmetric Dirichlet distribution would be:

In the sub-heading "Special cases" in the Dirichlet distribution wikipedia article, the critical value to be aware of is that sparsity refers to situations where $\alpha < 1$. 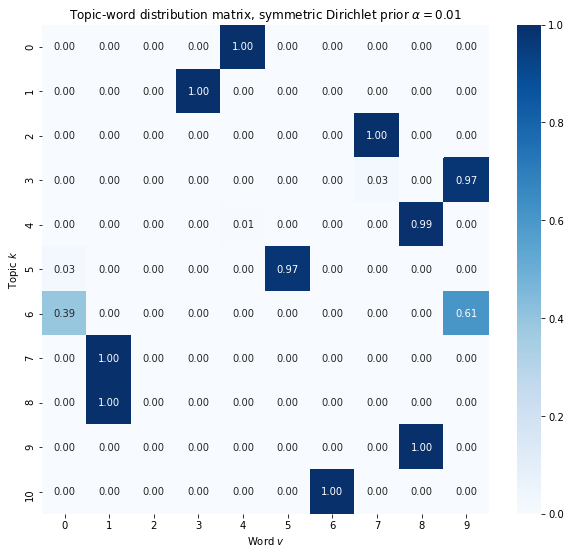 Note that we can control the sparsity or 'sharp peak profile' of the sampled topic vector $\phi_k$ as a general characteristic only in a probabilistic sense. You can see this by noting that even though many topics $\phi_k$ for $\alpha = 0.01$ have probability mass concentrated on one word, not all possess this characteristic, e.g. $\phi_6$ has two 'peaks. A helpful mental model for this probabilistic aspect is to conceive of drawing a topic vector $\phi_k$ from a bag of topic vectors.

Furthermore, notice that we cannot control the exact location of the peak in the symmetric case, that is, the location where probability mass is concentrated, only the general profile.

Now contrast this with the non-sparse case $\alpha = 10$, the 'flat plain' profile: 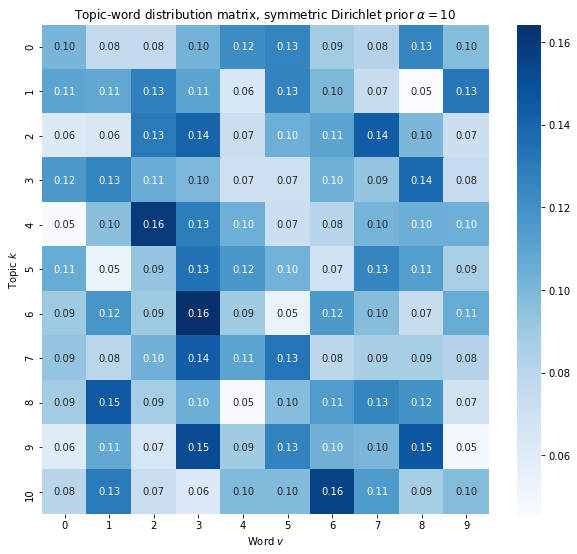 2. When the Dirichlet distribution is not symmetric, that is, using a hyperparameter $\boldsymbol{\alpha}$ with non-identical components $\alpha_v$, we can encode prior beliefs over favouring one or more components $\phi_{kv}$ in the probability vector $\phi_{k}$ over other components.

The Dirichlet prior is now:

In this case, we can specify where probability mass is concentrated in each topic vector $\phi_k$. And this is done by adjusting the relative magnitude of each component $\alpha_v$, and where this is relative to other components $\alpha_{-v}$. In this way, we can specify where the the 'peaks' are located in each topic vector $\phi_k$, so if we want to place more probability mass on word $v$, i.e. making $\phi_{kv}$ larger, we would make $\alpha_v$ large relative to $\alpha_{-v}$. The reservation that this correspondence is probabilistic in nature similarly holds. 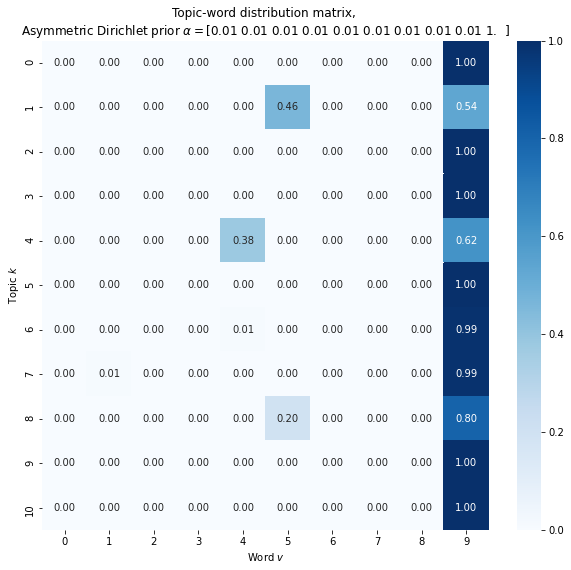 Here is a partial answer to why it may not be the case that the kinds of topic vectors $\phi_k$ on which you encode prior beliefs on in 1. will be the same after you have conducted approximate posterior inference in 2. This can only be at a high-level, and there are both conceptual and implementational details that need to be glossed over.

To see how your prior beliefs on all $K$ topic vectors $\phi_k$ influences this computation, note that we can use Bayes rule and the way the LDA model factorises to get

iii. Strictly, however, the situation is not as simple as I have laid out. The departure from the above idealised setting, which complicates things, but does not change what I have stated in italics, is the inclusion of the latent topic assignments $Z$. This inclusion makes computing the normalisation constant $p(W ; \alpha, \beta)$ intractable, thereby making the posterior $p(\Phi, \Theta, Z | W ; \alpha, \beta)$ difficult to compute.

The gist of what is going on under the hood with gensim is that we instead compute an approximation to this posterior, with the following factorisation structure

Where I have not shown further factorisation on $q(\Theta; \Gamma)$ and $q(Z; \Sigma)$. The above factorisation structure is a feature of the fact that we assume that our approximation lies in the mean field family of distributions $\mathcal{Q}$. The functional forms we assume on each of the $q(\Theta, \Gamma)$ etc. are chosen to match those specified in the LDA model.

Now when you do variational inference, which is what is going under the hood with gensim, you are computing estimates of the variational parameters $\hat{\Lambda} = \{\hat{\lambda}_1, \cdots, \hat{\lambda}_K \}$ (and also estimates $\hat{\Gamma}$ and $\hat{\Sigma}$) so that the posterior approximation $q$ is "close" to the true posterior $p$, in the sense of minimising KL-divergence

The difference here from iii. is that we are computing an approximate posterior $q$ through estimation of $\Lambda, \Gamma, \Sigma$ rather than an exact posterior $p$.

The similarity with iii. however is that in the process of estimating $\Lambda, \Gamma, \Sigma$, thereby indexing an approximate posterior $q$ so as to minimise a "distance" (divergence measure) between a family of approximate posteriors $\mathcal{Q}$ and the true posterior $p$; there is still confrontation with data $W$, albeit indirectly through the likelihood $p(Z, W | \Theta, \Phi)$ in the true posterior $p(\Phi, \Theta, Z | W, \alpha, \beta)$ in $D_{KL}(q || p)$.

Hence in the variational Bayesian inference case, it will be via this transmission mechanism involving data $W$ which will be the primary reason for getting posteriors on $\phi_k$ that differ from your prior beliefs.

Not the answer you're looking for? Browse other questions tagged bayesian natural-language text-mining latent-variable latent-dirichlet-alloc or ask your own question.