How to get the expected counts when computing a chi-squared test?

I just have 1500 data points in excel. However, I want to do a chi squared test to prove if the data is normaly distributed.

My question is: How to calculate the expected range for such a large data set?

How to calculate the relative frequencies for such a large data set?

Using a spreadsheet for a quick-and-dirty check of goodness of fit to a distribution is not a bad idea, especially if somebody has handed you a batch of data in a spreadsheet or you are doing other spreadsheet analyses with these data (or if you want to check up on other software to confirm its accuracy or your understanding of its calculations). Here is what a chi-squared test might look like in a spreadsheet: 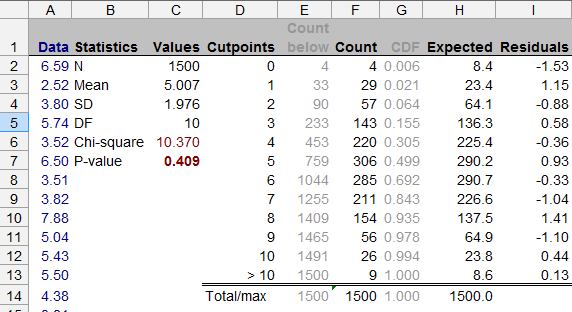 The chi-square statistic in this example is $10.37$ with a p-value of $0.409$. The data are singled out with a separate (blue) color; important values are highlighted; and auxiliary values (whose columns I usually hide) are shown in light gray text. (A few calculations are done as cross-checks, such as the values in the "Total/max" line (row D14:H14).)

To accomplish the test,

Here are the formulas used in the example:

In this case all residuals are small in size; there is no pattern to them; and the chi-squared p-value is large. We conclude these data look Normally distributed. (In fact, they were generated using draws from a Normal distribution with mean $5$ and standard deviation $2$ via the formula NORMSINV(RAND())*2 + 5.)

Notice that the formulas make extensive use of named ranges. The names correspond systematically to the labels shown in the spreadsheet; for instance, Data is the range A:A headed by "Data" (column A). I warmly recommend always using this technique, because it creates readable formulas and readable formulas are formulas that tend to be correct.

Be careful when reproducing these formulas: although most of the formulas in columns E:I have just been copied down, often the very first and very last formulas in each column are a little different.

1) No test will prove your data is normally distributed. In fact I bet that it isn't.

(Why would any distribution be exactly normal? Can you name anything that actually is?)

2) When considering the distributional form, usually, hypothesis tests answer the wrong question. What's a good reason to use a hypothesis test for checking normality?

I thought that the chi squared test or the Kolmogorov–Smirnov test provide a good indication about the distribution.

However, if not, what are some usecases they are good for?

I can think of a few cases where it makes some sense to formally test a distribution. One common use is in testing some random number generating algorithm for generating a uniform or a normal.

3) If you want to test normality, a chi-squared test is a really bad way to do it. Why not, say, a Shapiro-Francia test or say an Anderson-Darling adjusted for estimation? You'll have far more power.

4) What do you mean by 'expected range', specifically?

by expected range I mean in the formula of the chi squared test the relative frequencies: ei=n∗pi

To have expected counts you need to split it up into subranges, and multiply the total count by the probability in the subrange.

Not the answer you're looking for? Browse other questions tagged distributions hypothesis-testing chi-squared-test excel or ask your own question.

354
Is normality testing 'essentially useless'?
313
How to understand degrees of freedom?
20
What tests do I use to confirm that residuals are normally distributed?
5
Given a 95% confidence level, how do I demonstrate 95% of the intervals actually contain the population mean?
0
How can I determine which cell chi-square value(s) contributed the most to a large 2-way chi-square omnibus test result?