The full bounty will be awarded to someone who provides a reference to any published paper which uses or mentions the estimator $\tilde{F}$ below.

This section is probably not important to you and I suspect it won't help you get the bounty, but since someone asked about the motivation, here's what I'm working on.

We can treat $W$ as a density $f = W / \iint W$ supposing that $\iint W > 0$. If we estimate $f$ based on $A$ without any constraints to $f$, then we cannot get a consistent estimate. I found an interesting result about consistently estimating $f$ when $f$ comes from a constrained set of possible functions. From this estimator and $\sum A$, we can estimate $W$.

Unfortunately, the method that I found shows consistency when we sample from the distribution with density $f$. The way $A$ is constructed requires that I sample a grid of points (as opposed to taking draws from the original $f$). In this stats.SE question, I'm asking for the 1 dimensional (simpler) problem of what happens when we can only sample sample Bernoullis on a grid like this rather than actually sampling from the distribution directly.

From (what I think should be) easiest to hardest.

Some ideas and notes:

Here is some R code if you want to compare the empirical distribution with $\tilde{F}_n$. Sorry some of the indentation is wrong... I don't see how to fix that. 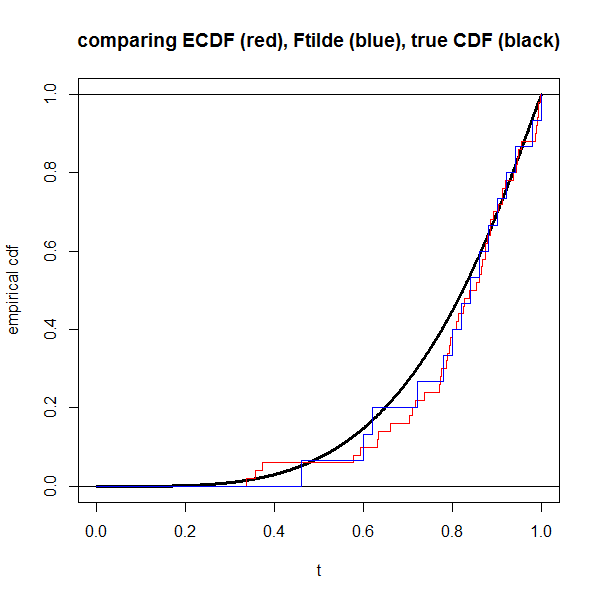 I edited this to address @whuber's comments.

I added R code and cleaned it up a bit more. I changed notation slightly for readability, but it is essentially the same. I'm planning on putting a bounty on this as soon as I'm allowed to, so please let me know if you want further clarifications.

I think I addressed @cardinal's remarks. I fixed the typos in the total variation. I'm adding a bounty.

Added a "motivation" section for @cardinal.

is not to your ECDF-like estimator on $[0,1]$ I believe it is logically equivalent to the Kaplan-Meier estimator (aka. product limit estimator) as used in Survival Analysis, even though that's applied to a time range $[0,\infty)$.

Estimating the bias would be possible once you have a reasonable estimate of the distribution via kernel smoothing if it is well enough behaved (see, e.g., Khmaladze transformation on Wikipedia).

In the bivariate case in your graph problem estimating $f = W / \iint W$ from $A$ albeit with a trivial symmetry constraint seems similar to the approach in Jean-David Fermanian, Dragan Radulovic, and Marten Wegkamp (2004), Weak convergence of empirical copula processes, Bernoulli, vol. 10, no. 5, 847–860, as @cardinal indicated "Multivariate Delta Method".

This answers questions 2 and 3 above. I still really want a reference though (from question 1).

Please comment if you see something wrong with this.

Fixed a typo in $V_{F(t)}$. Thanks @cardinal for your suggestion in the comments about question 4.

Not the answer you're looking for? Browse other questions tagged distributions bernoulli-distribution stratification rejection-sampling empirical-cumulative-distr-fn or ask your own question.