The following questions are to essentially check whether I am carrying out the correct econometric regressions free from any errors before computing them on Stata to get some results. Please note that this is my first time doing any econometric analysis on my own accord.

Just to provide some context, I am looking at the effect of macroeconomic uncertainty on trade balance in the Euro Area, using quarterly data between 1999 - 2015 (67 quarters) on 17 Euro Area countries. As most of the variation in my data is time variance rather than cross-sectional variance, I am conducting a log differenced fixed effects regression (with the exception of macroeconomic uncertainty, which I am only taking the log of (not log difference), for theoretical reasons) in order to avoid the time series issue of non-stationarity. I am also including time fixed effects. I will be computing the regression first with import growth as my outcome variable, and then with export growth as my outcome variable, and then with net export growth as my outcome variable (each with their own corresponding specification). Please find a screenshot of these three regressions attached below, where "FE" denotes "Fixed Effect" and Q_t is the quarterly dummy for a specific quarter t. 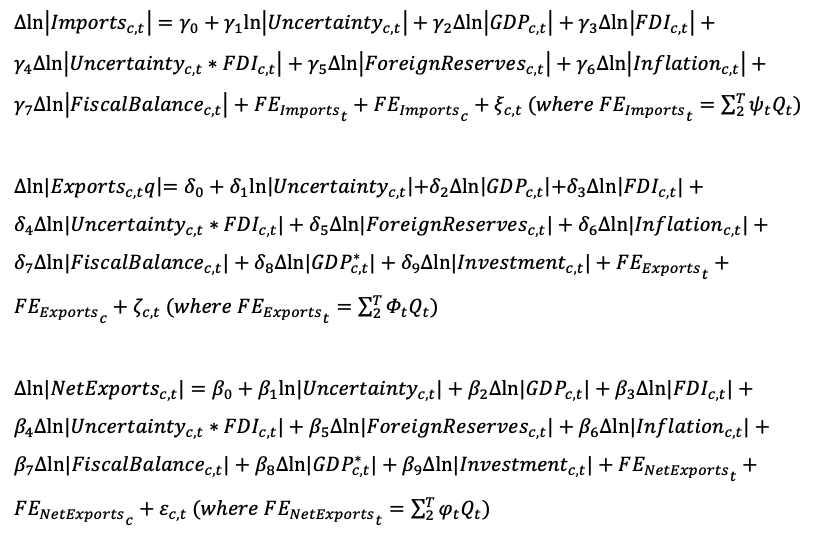 I know that these questions do not really relate to Stata per se and rather pertain to econometric methods and general theory, however I would be extremely grateful if you could offer any opinions and thoughts whatsoever as I do not have anybody in particular to turn to for guidance before moving onto the Stata stage, and therefore any constructive criticism and nudges in the right direction based on your own viewpoints of the above would give me great peace of mind when conducting my analysis on Stata. I apologise for the numerous questions too, some of which will probably be silly and/or basic questions, and I appreciate anybody taking the time out to answer or offer their thoughts on any number of these questions.