How to combine slopes from two separate analysis with same variables? [closed]

I am wondering if there is a way to combine slopes/results from two separate linear regression analysis in R. I am not sure if meta-regression applies here or is there a package in R that will help me do this? 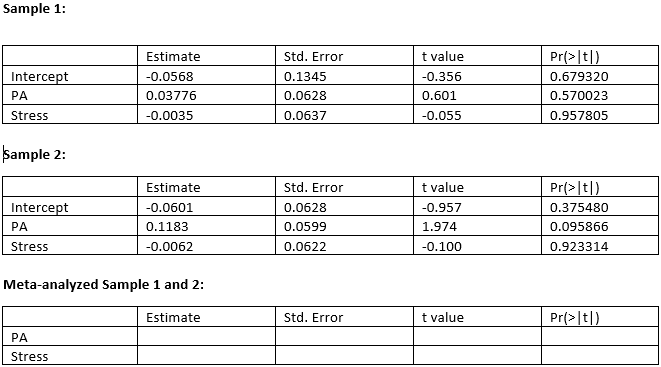 One approach to estimate an "average" regression would be to do the following:

To proceed, you will need the p-values for the two interaction terms to be zero. If this happens, then you can run the model without the interaction terms, and you can report the "average" partial slopes from the model using the aggregated data set.

Not the answer you're looking for? Browse other questions tagged regression multiple-regression meta-analysis meta-regression or ask your own question.

2
How can I perform a meta-analysis on variables which are not normally distributed?
9
Multilevel multivariate meta-regression
2
Pooling data across experiments- correlation
1
Is it possible meta-analyse results with no reported correlation between exposure and outcome?
2
Underlying computing methods for meta-regression in the metafor package and the meta package
0
Constructing a unified path analysis model from several datasets each with different combinations of variables
1
Meta-analyzing rates of change in one variable observed in one group over time
2
Can you perform dose-response meta-analysis with only two studies?