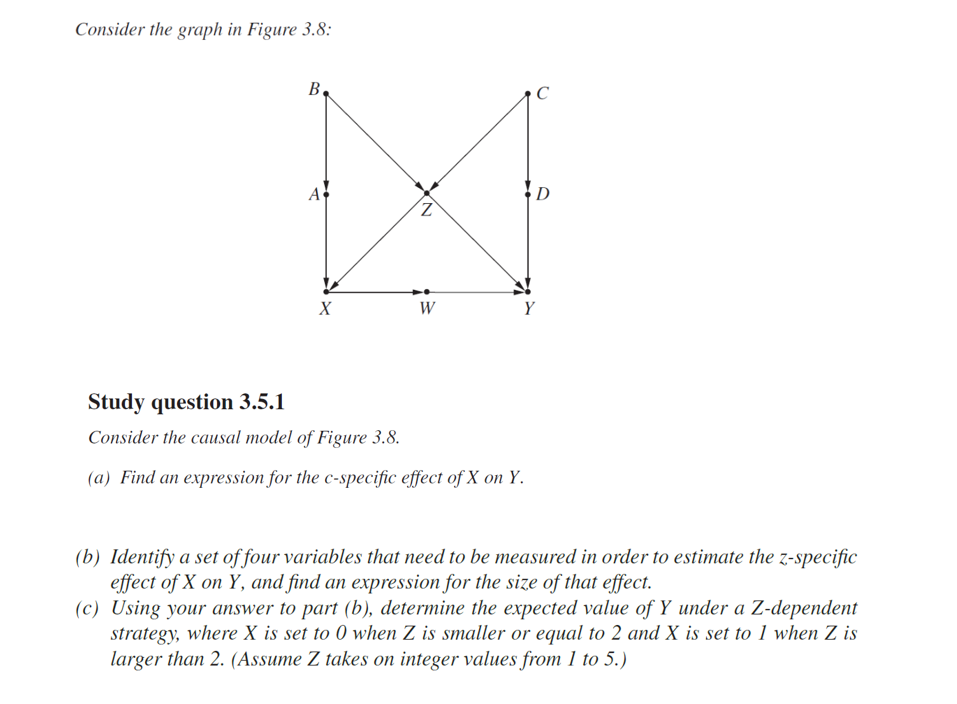 This graph and questions come from: CAUSAL INFERENCE IN STATISTICS A Primer - Pearl Glymour and Jewell (2016).

I ask you If my solutions for the study question above (a bit extended/modified by me) are correct.

I read that, given $(X,Y)$, we need a set of control that include $C$ and deal with backdoor criterion. So $[A Z C]$ is a compliant set. The expanded expression is given in the book but I want to understand if, given the linear simplification, the regression like:

If I'm wrong what are the correct solutions ?

EDIT: In order to clarify my doubts I add something. I’m sure that in linear models the quantity involved in the equation below (letters have no relations with the example above):

can be translated in regression term as follow. I’have to perform the regression:

Now the z-specific effect of $X$ on $Y$ is representable as:

In a bit different case, the w-specific effect of $X$ on $Y$ is also representable as:

regression causality structural-equation-modeling
Share
Improve this question
edited May 26 at 12:18
markowitz
asked May 11 at 13:20

Not the answer you're looking for? Browse other questions tagged regression causality structural-equation-modeling or ask your own question.

3
From DAG to SEM, an example

1
Causal Inference using Linear Regression
1
What variables to include/exclude when estimating causal relationships using regression
2
Definition of covariate-specific effect: why after, not before intervention?
4
linear causal model
6
Regression in Causal Inference
2
Front door formula - calculation in practice
1
How to apply structural equation model (SEM) to set up the SNP pleiotropic effect
3
From DAG to SEM, an example