My question is about the output in sklearn.svm.SVC function in Python. Apologies for a software context question but I believe a good number of those who have learnt SVM will have come across this function.

In the sklearn documentation section 1.4.7.1, it is stated that 'These parameters can be accessed through the attributes dual_coef_ which holds the product $y_i \alpha_i$. The array returned by dual_coef_ is of shape (n_classes-1, n_sv).

As I understand, the support vectors are those data points whose $\alpha_i > 0$, thus they will make an impact on the decision boundary which has the form \begin{align*} f(x) = \sum_i \alpha_i K(x_i, x) \end{align*} Those non-support vectors have their $\alpha_i = 0$.

When I fit the following model however the output array in dual_coef_ does contain zeros. What is the explanation for that? Thanks in advance.

The issue is that you have a multiclass model. Each column represents a support vector for at least one of the binary sub-classifiers. So the non-zero property that needs to hold is that each column contains at least one nonzero entry. From (near the end of) section 1.4.1.1:

There's an example after that; I can't say I found it particularly illuminating (and I think it's suffering the same transposition I noted in the quote), but perhaps you will.

I've had a chance to produce an example notebook. It uses the iris dataset, with just two features for visualization; in the plots below, class 0 is purple, class 1 is green, and class 2 is yellow. The support vectors are circled; there are in particular 3 support vectors from class 0, and the first three columns of dual_coef_ are: 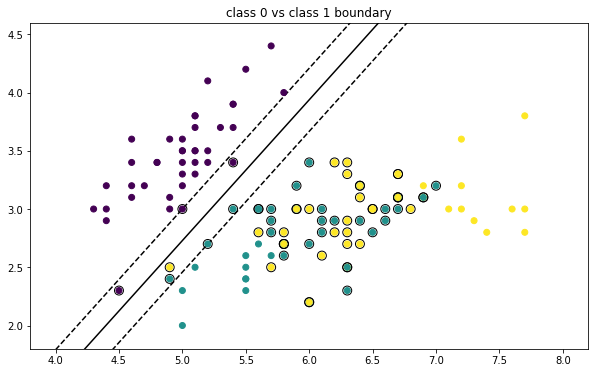 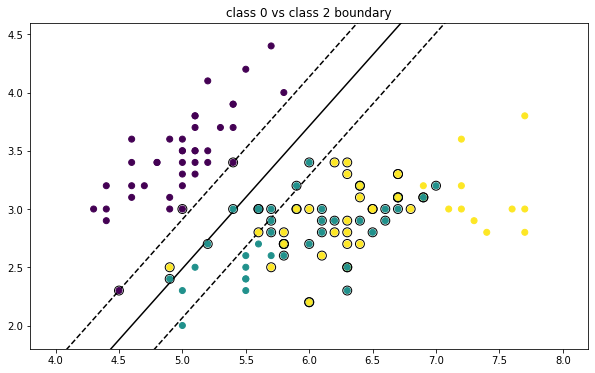 The support vectors for classes 1 and 2 primarily have dual coefficients listed as zero first then something nonzero. Here are the only exceptions to that: 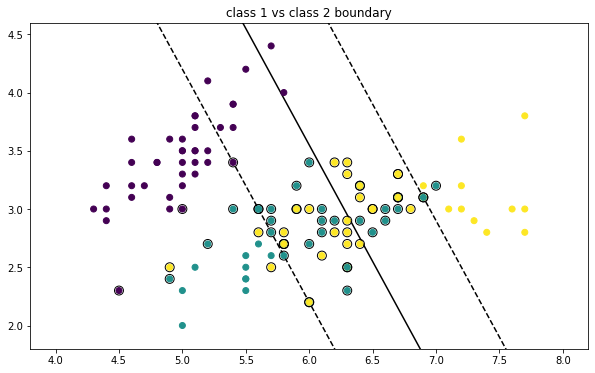 Not the answer you're looking for? Browse other questions tagged classification optimization svm scikit-learn or ask your own question.