While I was glancing at hypothesis tests, I saw paired and two-sample t-test but couldn't understand the difference. For the explanation of these two tests, I saw the following sentence " Two-sample t-test is used when the data of two samples are statistically independent, while the paired t-test is used when data is in the form of matched pairs."

How are these two tests are different? Because based on this explanation, I thought, we could think of the matched-pairs population as two independent populations. Can anyone explain?

I only have a statistics experience of 1 year so please consider that I may have a hard time understanding profound explanations.

In a two-sample test, you have two independent samples. Of course, by independence, we expect the two sets of measurements will not be correlated. Sample sizes for the two samples need not be equal. (But it often makes sense for them to be approximately equal.)

In a paired test you have one sample of pairs. Typically, there will be $n$ paired observations $(x_i, x_2).$ These may be two measurements on each individual subject. (For example, Before and After 'treatment' scores on a questionnaire, exam, or lab test.) Alternatively, the pairs may be pairs of subjects. (For example, married couples, twins, or subjects matched according to some criterion. They might also be two devices manufactured at the same time and place.) It is expected that the two measurements on pairs will be correlated. In analysis, one may look at a sample of differences $d_i = x_1-x_2.$

Paired. Suppose you have a study in which subjects have diverse skills at a particular task. It is claimed that a training course will increase skills by a small, but important amount. You test 20 subjects before (test scorex1) and after (x2) the training.

The average score increases from 105.91 Before training to 109.16 After. Before and after scores are highly correlated.

A scatterplot shows the strong linear correlation. Also, most of the $(X_{1i},X_{2i})$ ploints lie above the 45-degree line, indicating modest, but mostly positive results from the training course. 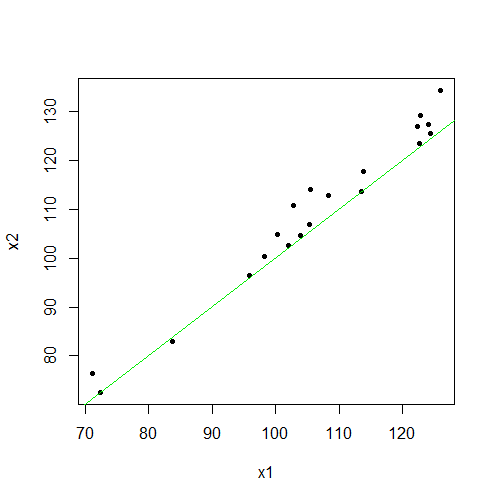 The pairing has allowed us to detect a small improvement 'above the noise' of great subject variability.

Then we would have a one-sided, two-sample t test. And, we would have only about a 20% chance of detecting the difference, on account of the diversity of skills in the population.

Notice that, in this particular case, the sample for the mean score for the subjects in the training group happens to be smaller than the mean for the control group. With such variable populations this is not a rare occurrence. Generally speaking, much larger sample sizes (about 200 in each sample) would be required for the two-sample t test reliably to detect a 'training' effect of 4 units.

When you use a paired T-test, you are essentially doing a one-sample test, where your one sample consists of the paired differences between outcomes in two groups. If you create a new sample of these difference values and then apply the formula for a one-sample T-test, you will see that this is equivalent to the paired test.