Pearson Residuals in the Poisson GLM

I am quite new to GLMs and have just fit a Poisson Regression in R to model a positive response $y$.

I now want to check how well it fits the data. In particular, I am unsure whether the variance really increases linearly with the mean. To check this, I plotted fitted values against the squared residuals ($\hat \mu_i$ vs $r_i^2$) hoping for a linear relationship.

Alternatively, I checked the plot of fitted values versus Pearson residuals. This should not show any pattern, right?

Does this make sense?

generalized-linear-model poisson-regression diagnostic
Share
Improve this question
asked May 16 at 13:08

Yes, plotting the Pearson residuals vs fitted is one way to check for deviations from the assumed variance-mean relationship; the point cloud should be roughly equal in width (i.e. no "fanning" in either direction). However, this can be hard to judge if the sample is unbalanced (i.e. lots more points for some ranges of fitted values), because our eyes tend to read the total amplitude of the point cloud (which will be bigger if there are more samples, even if the variance is unchanged).

However, the standard solution is the scale-location plot, which typically shows $\sqrt{|r'_i|}$, where $r'$ denotes the standardized Pearson residuals (i.e. $(y_i-\mu_i)/\sqrt{\phi V(\mu_i) (1-h_i)}$, where $V()$ is the variance function, $\phi$ is the estimated dispersion, and $h$ are the "hat values". If you have a fitted glm() model m, this is what plot(m, which=3) shows you (it's the third panel in the default 4-panel plot produced by plot(m)). (You can retrieve the standardized residuals for your model with rstandard(m).) This has some advantages: (1) standardizing takes care of the increased variance expected in values with greater leverage/farther from the center of the data; (2) according to ?plot.lm, plotting the square-root of the absolute values of the residuals reduces skew in the results (I'm not actually sure why that's important). The plot method also adds a smoothed line, which can help you assess the overall trend. (3) It is arguably easier to detect deviations from a constant/flat line than from linearity (e.g. see here for "worm plots", or detrended quantile-quantile plots, as an alternative to the standard Q-Q plot).

Below I show an example using the famous data set on deaths per year from horse kicks in the Prussian army. I use broom::augment() + ggplot2, which may be overkill for your case (it does allow a little more flexibility, in this case with showing replicated points) to generate the scale-location plot.

The scale-location plot only diagnoses a difference in the overall mean-variance relationship from linearity, not whether there is "too much" variance overall (e.g. $V= \phi\mu$ with $\phi>1$); don't forget to check for such overdispersion ...

You may also be interested in the DHARMa package. 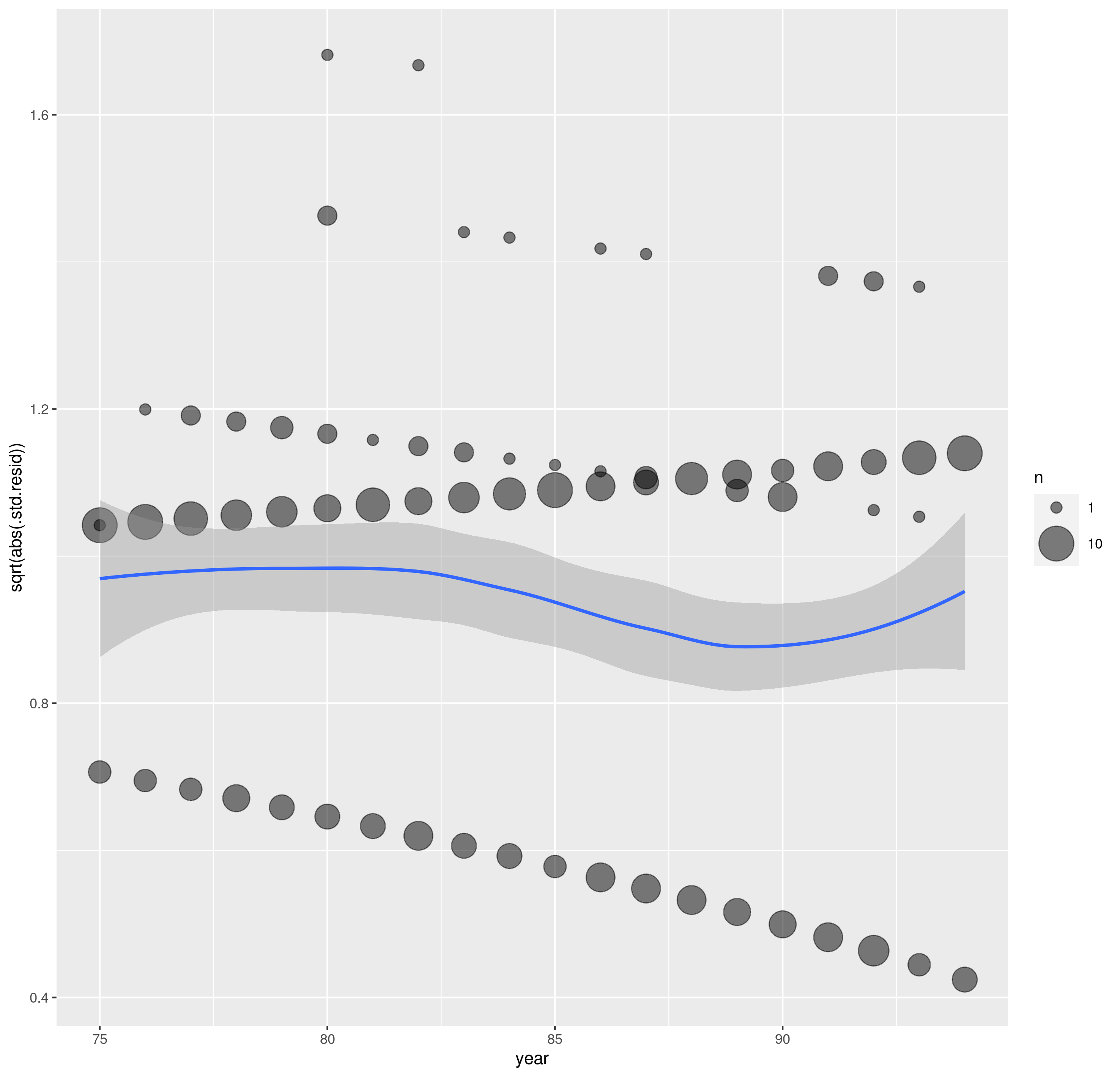 Not the answer you're looking for? Browse other questions tagged generalized-linear-model poisson-regression diagnostic or ask your own question.