Which OLS assumptions are colliders violating?

The following webpage says that:

We should not control for a collider variable!

Which OLS assumptions are colliders violating?

I will assume models without intercepts to have shorter notation. Say the structural causal model is \begin{aligned} Y&=\beta_1X+u, \\ Z&=\gamma_1X+\gamma_2Y+v, \\ X&=w \end{aligned} with $u,v,w$ being mutually independent zero-mean exogenous structural errors so that $Z$ is a collider: $X\rightarrow Z\leftarrow Y$.

Let us specify a linear regression as $$ Y=\alpha_1X+\alpha_2Z+\varepsilon $$ and get ready to estimate it with OLS. We would wish for $\hat\alpha_1^{OLS}\rightarrow\beta_1$ as $n\rightarrow\infty$. This would be the case if the following two conditions held simultaneously:

However, this is not the case. Suppose $\alpha_1=\beta_1$. Then from the structural causal model and the specified regression we get \begin{aligned} \varepsilon&=-\alpha_2Z+u \\ &=-\alpha_2(\gamma_1X+\gamma_2Y+v)+u. \end{aligned} Thus $\varepsilon$ is a linear function of $X$. This violates the assumption $\mathbb{E}(\varepsilon|X)=0$. This assumption is what Wooldridge calls Assumption MLR.4 (Zero Conditional Mean) in "Introductory Econometrics: A Modern Approach". Note that it is specific to the desired causal interpretation of regression parameters; noncausal interpretations (such as regression as a model of the conditional expectation function of $Y|X,Z$) do not require it. Since it is violated, we cannot have both conditions above to hold simultaneously. Therefore, $\beta_1$ cannot be the target to which the OLS estimator of $\alpha_1$ converges.

It is very easy to demonstrate that all the assumptions of OLS can be satisfied and yet collider bias persists.

Note all the assumptions of linear regression are satisfied:

i) Observations are iid ii) The functional form is correct iii) Homogeneity of variance, and iv) The likelihood is normal (though this is not as important, hence its place last...) 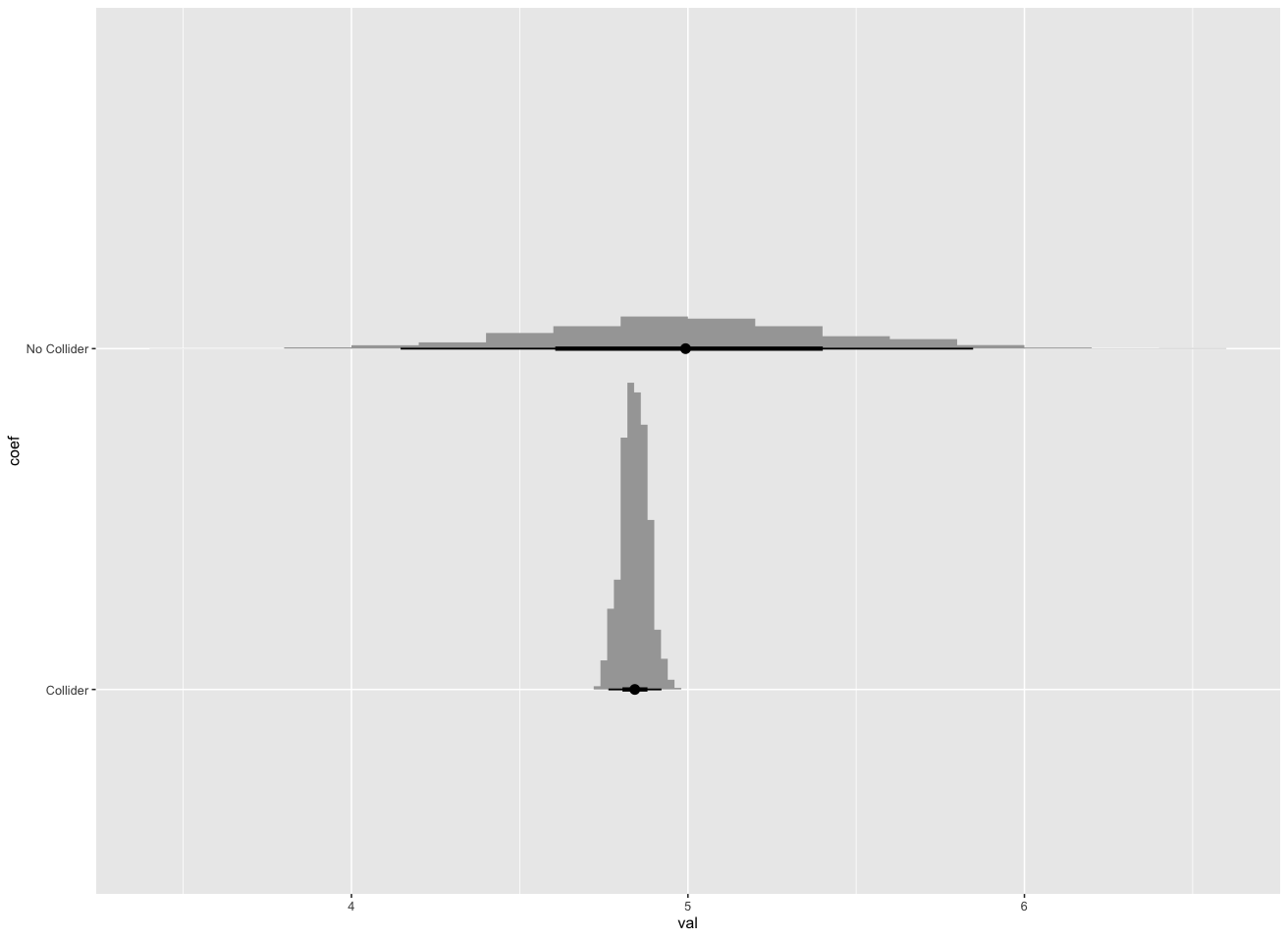 I do not think observations are iid is an OLS assumption

Also, did you mean homogeneity (if so, what does it mean?)

The "why" of colliders is still a bit of a mystery to me. In the readings I've done, authors just say "the flow of information is blocked by a collider, but conditioning on the collider opens the back door" or something in that spirit. If you find a satisfactory explanation for why the collider bias happens, let me know.

I don't think your model is well specified. In the population y is a function of x and u. Yet you are only controlling for x

What if u is some expensive measurement, or one we forgot to collect? We can't collect data on everything that effects the outcome. That being said, you're right to be suspicious of this. There are more formal ways of checking that the model you've written down is consistent with the data that involve checking conditional independence. You can find ways to test these implications here under "Testable Implications".

The problem here is that "collider" is a causal concept while OLS regression not necessarily deal with causality. About "regression and causality" read here: Under which assumptions a regression can be interpreted causally?

If we intend OLS regression as an estimator of the linear CEF, collider and other causal problems not matters. Read here: Regression and the CEF

Moreover, unfortunately, several books are ambiguous if not erroneous about the meaning of regression, especially about his possible causal use (read here: How would econometricians answer the objections and recommendations raised by Chen and Pearl (2013)?)

EDIT: following the discussion with Richard Hardy I add here the same example revised in my perspective:

structural errors can be considered the exogenous variables in the system and we assume them as zero mean and independent each others. Note that one implication of that is: $E[u_Y|X]=0$, $E[u_Z|X,Y]=0$. Note that, in general, the SCM encode (explicitly) all causal assumptions made by the researcher.

Now the question is that we are interested in the causal effect of $X$ on $Y$, then we looking for the regression equation that permit us to identify $\beta_1$; note that this is the direct causal effect of interest, and in this particular case it is the total too (assumption).

The reply is quite simple, because from this regression

now, in general for identification of the causal effect of interest the regression above is not what we need ($\theta_1$ do not identify the effect of interest). We have to add some control variables. Now the original question is (more or less): why control for collider is not a good idea?

In our example we can try to add the collider as control and compute the regression as follow:

but $\theta_2$ NOT identify $\beta_1$. It is so because the admissible control sets have to comply with backdoor criterion; so, $[Z]$ is not among them while the empty set is. So, including $Z$ (collider) is a bad idea. Worse, this regression do not identify any causal effect implied by the SCM. Indeed not all regressions can help in causal inference.

For other example in the same fashion you can see:

Infer one link of a causal structure, from observations

Said that, I don't know if this example is what the asker looking for. The problem is deeper. The so called "OLS assumptions" play some role above?

This can be matter of debate. I wrote a lot about that in this site: see links above, and links therein. However my short answer is: NO. This because "OLS assumptions", wherever presented, not include any clear causal assumptions.

32
Under which assumptions a regression can be interpreted causally?
20
Definition and delimitation of regression model
12
T-consistency vs. P-consistency
15
How would econometricians answer the objections and recommendations raised by Chen and Pearl (2013)?
3
What is the main purpose of Feature Selection?
7
Why does collider adjustment in a shielded triplet tend to cause independence?
3
Regression and the CEF
3
Infer one link of a causal structure, from observations
3
In Berkson's paradox, is $\beta_1 = 0$ or $\ne 0$?
1
Binary Logistic Regression?
See more linked questions

14
Assumptions to derive OLS estimator
0
OLS Assumptions - Errors are normally distributed
5
Controlling variables in causal diagrams
0
Is it justify to use/report OLS model w/o assumptions check cause results are consistent with other types of models?
0
Which assumptions do I need to test?
3
Am I violating any causal inference assumptions?