Background: I'm analyzing correlation between two behavioural types (boldness and aggression). Boldness values are continuous (range: 2 to 1195) and it's unit of measurement is in seconds (latencies). Aggression are ordinal ranks (ranked from 1 to 6, where 1<2<3 and so on..). Higher boldness scores mean the individual is less bold because it takes longer to resume activity. Higher aggression score means the individual is more aggressive. First, I ran a bayesian bivariate regression (MCMCglmm) to partition the variances into among- and within- individual differences, and then checked for covariance between boldness and aggression (the two response variables). I got a significant positive correlation which actually means that boldness and aggression are negatively correlated because increasing boldness values are deemed less bold.

Next, to make the results more intuitive, I reversed the boldness scores so that higher boldness scores indicate higher boldness. Since the boldness range is from 2 to 1195, I subtracted each boldness value from 1197 so that the new variable (lets call it Rboldness) also has a range from 2 to 1195 but in the reverse direction. The variances between boldness and Rboldness is the same, but the mean has changed. The distribution also changed from a right skew (boldness) to left skew (Rboldness) after log transformation.

The Question: The problem is that the strength of the correlation reduces from 0.5 to 0.3 after reversing the boldness scores (Rboldness). Being a purist, I'm not very comfortable in using ordinal ranks as a response variable, so I also analysed the data by collapsing the aggression ranks (1 to 6) into two meaningful and relevant categories (ordinal scores 1-4 coded as 0 and scores 5&6 coded as 1) and ran a binomial bivariate mixed model. The binomial model resulted in a significant correlation coefficient (Figure 1) before reversing boldness scores (r = 0.6) but the correlation becomes insignificant (Figure 2) after reversing the boldness values (Rboldness). Can anyone please inform why the correlation becomes insignificant after reversing one continuous variable? Many thanks in advance! 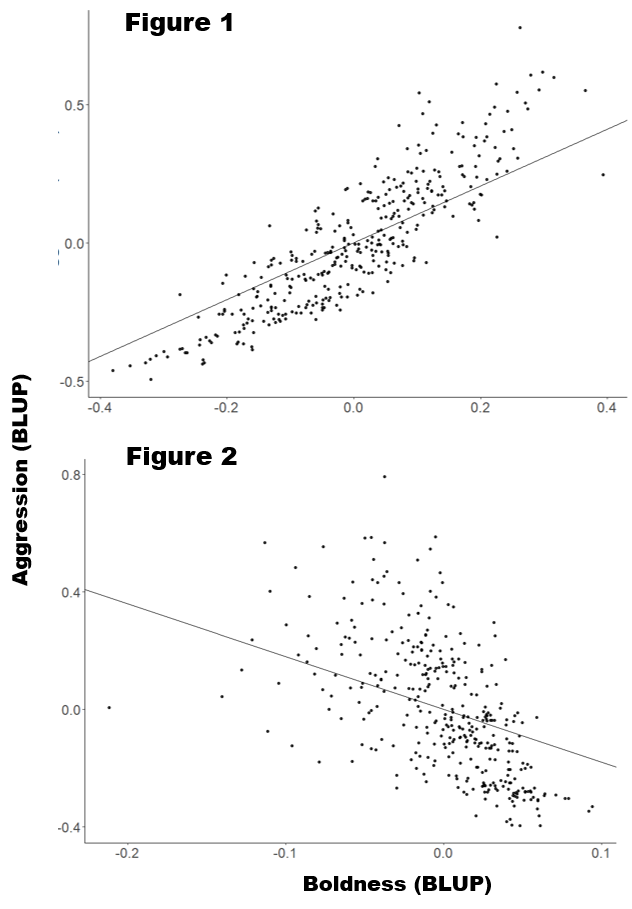 Following suggestions from @Robert Long and @Henry (see the comments above), the issue is now solved. Apparently, reversing Boldness scores as I mentioned in my original question also reversed it's skew and so log transformation didn't help for Rboldness because it was negatively skewed. Therefore the model assumptions of linearity and heteroskedasticity were violated and so the non-significant correlation. However, reversing boldness scores by division as suggested by Henry made Rboldness positively skewed, and log transformations helped in reducing the skewness of the data. Subsequently, the model's assumptions were not violated, and the correlation coefficient was similar when analysed with the model consisting the un-reversed Boldness scores, but opposite in sign.

Not the answer you're looking for? Browse other questions tagged bayesian correlation multiple-regression multivariate-regression type-i-and-ii-errors or ask your own question.

0
Help need identifying analyses methods
0
Should I draw the conclusions from average or individual data? Is this approach using Pearson CC correct?
1
Significance of correlation with range restriction in x
0
Setting priors for bivariate regression
0
Differing P-Values on When Comparing lm() and pcor.test() for Partial Correlation