I have data from ~3500 students regarding their experiences taking an online class last year. The class consisted of a unified on-demand component and several sessions on Zoom with instructors. I didn't design the survey, but I've been given the results in a spreadsheet to analyze.

The data looks like this (each row represents a student's response):

I have no real experience with statistics, but it seems to me like there are things that could be discovered from this data apart from the averages and counts.

Is there a way, for example, to account for the differences between instructors when looking at course satisfaction? (My instinct tells me that a poor instructor will drag all the numbers down)

Another example: is there a way I can see if the type of, or the number of devices used affects the student's perception of the software used in the course?

Sorry for the barrage of questions! My main question is: How would you approach this data set? What tests would you run on it?

Suppose there are four instructors and one question about overall course satisfaction.

Then Likert scores for the four instructors might be something like the fictitious data below. (I'm using 1000 students; 250 per instructor.)

With only five different values, boxplots do not show much detail, but it is clear that not all five instructors have the same median score (vertical bars inside boxes). Nonoverlapping 'notches' in the sides of boxes are nonparametric confidence intervals for medians. suggest differences between two instructors. [For Instructor 2, the notch extends beyond the high edge of the box.] 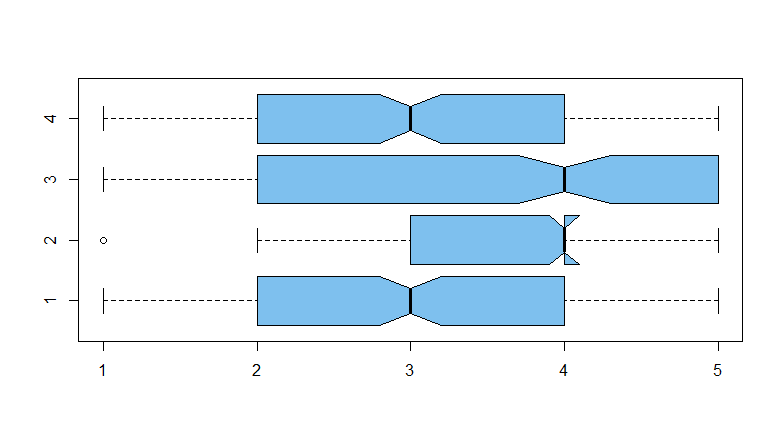 A Kruskal-Wallis test shows significant differences among instructor's scores with a P-value near $0.$

The notches in boxplots suggest where the most important differences may lie. One method (not necessarily the best) to do formal tests is to look at two-sample Wilcoxon rank sum tests.

For example, such a test confirms that there are significant differences between Instructors 3 and 4.

One has to be careful to avoid 'false discovery' upon repeated testing on the same data, but with such a small P-value this comparison is solid.

This brief answer illustrates one possible avenue for analyzing your data. It is enough of my suggesting possibilities in terms of fictitious data. After some thought, you may want to present specific data and questions about specific analyses.

Not the answer you're looking for? Browse other questions tagged data-visualization likert exploratory-data-analysis or ask your own question.

10
Statistical significance of changes over time on a 5-point Likert item
2
Small sample, Likert scale as independent variable
4
How can Factor Analysis be used to remove questions from a survey?
1
Likert scale questionnaires with ANOVA and Kruskal-Wallis test
1
Testing for difference in distributions of Likert-scale data that differs only in a median-preserving spread