I am conducting research on the relationship between a person's birth order and later risk of obesity using data from several 1-year birth cohorts (e.g. http://www.ncbi.nlm.nih.gov/pmc/articles/PMC2908417/).

A key challenge is that birth order is linked to other features such as maternal age, number of younger and/or older siblings, and birth spacing, that may also influence the outcome via different mechanisms. Further, any influence these things have on later obesity risk might be modified by the gender composition of the siblings, including the "index child" (the participant in the birth cohort).

For each index child, one could draw a timeline that showed all of the births in the family, with maternal age at the time variable. 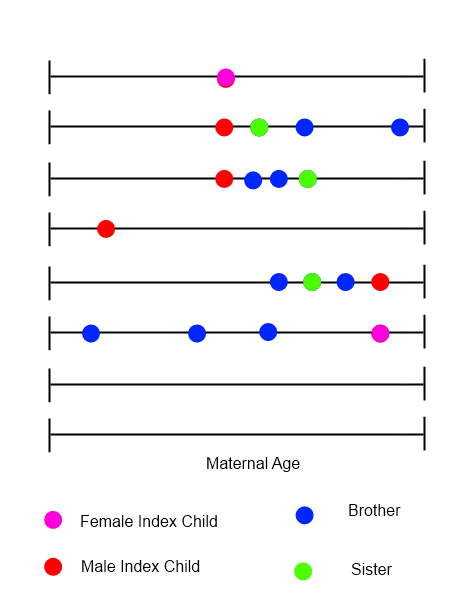 I am trying to identify methods to analyze these kinds of data, where the order, timing, and nature of events might all be important. I am asking this question here because of the diversity of applications members work with - I expect someone has some immediate suggestions that will take me much longer to identify alone. Any nudges in the right direction(s) would be greatly appreciated.

Related question(s): How should I analyze data on birth intervals of women?

You might consider using multilevel models (mixed regression) to estimate the between and within family effects. One possible strategy is to use a planned hierarchical model building approach. For example, test each potential predictor in a univariate model. If the between family effects remove the birth order effect, then it would strongly suggest birth order is not important but that other influences are. An example of citation for this for birth order effects on IQ:

I hope that this helpful.

I am approaching this as a statistical question and have no special knowledge of the medical issues.

Looking at the article you refer to I see that one cohort contained 970 individuals. If you have data on several cohorts of roughly that size, then the overall size of your dataset offers the opportunity to select reasonably large subsets in which each individual's timeline meets specific conditions. For example, a subset might include, say, all male individuals with maternal age 25-29. A regression, for such a subset, of a suitable measure of later obesity against birth order would eliminate any possible effect on later obesity of differences in gender of the index child and largely eliminate any possible effect of maternal age.

It is not straightforward to extend this approach to the gender of siblings since if one condition for a subset were, say, that the index child has an older female sibling, that implies that the index child is not itself an eldest child, narrowing the range of the independent variable in the regression. However, a way round this might be to define conditions using "if any". For example, a subset could be defined to include all male individuals with maternal age 25-29 and with older siblings, if any, all female. Such a subset would still include individuals with any birth order.

If a subset were defined by too complex a set of conditions, then the number of individuals it contained might be so small that the resulting estimates of coefficients would be too imprecise to be useful. If this approach were adopted, there would probably be a need for a judgmental trade-off, in defining subsets, between eliminating as many possible effects as possible and including enough individuals to yield a useful result.

I would suggest functional data analysis but I suspect you might have a lot of families with too few children to get reasonable estimates. Go ahead and read into it though, as it addresses your needs. Perhaps someone has used it with similar data already.

If you don't want to do something as massively non parametric as that, you should use your clinical expertise to reduce the dimensionality of the data. For example, one variable in your model could be number of children, another could be average number of years between children, and so on. If there is any effect in these variables, it may show up even if you haven't correctly specified the functional form immediately. Further knowledge-driven model building may allow you to build a highly predictive model--just make sure you keep a validation set!

Not the answer you're looking for? Browse other questions tagged timelines or ask your own question.

4
How should I analyze data on birth intervals of women?

2
How to create a timeline to accurately visualize a time series with some missing dates?