I am interested in the effect of dichotomous variable A on several scores for a sample size of N = 469 (observational data). Most scores have a non-normal, asymetrical distribution. Here's the contingency table when considering variables A and B, showing an unequal distribution, especially for the last level of variable B (n=96):

The strata/cells are uneven for the sample, although they are assumed to have an equivalent count in the general population.

More precisely, what I need is to know is what scores differ across the two levels of variable A when we control for variable B, then display descriptive statistics and graphs (e.g. boxplots) that show the difference for those scores. Ideally, scores should be kept on the original scale at least for the descriptives and graphs, since interpretation of the results depend heavily on the numerical values that are displayed.

Here is a group comparison for one of the scores, with the values taken directly from the sample (no bootstrap, no transformation). For that score, there was a difference in A for all levels of B. 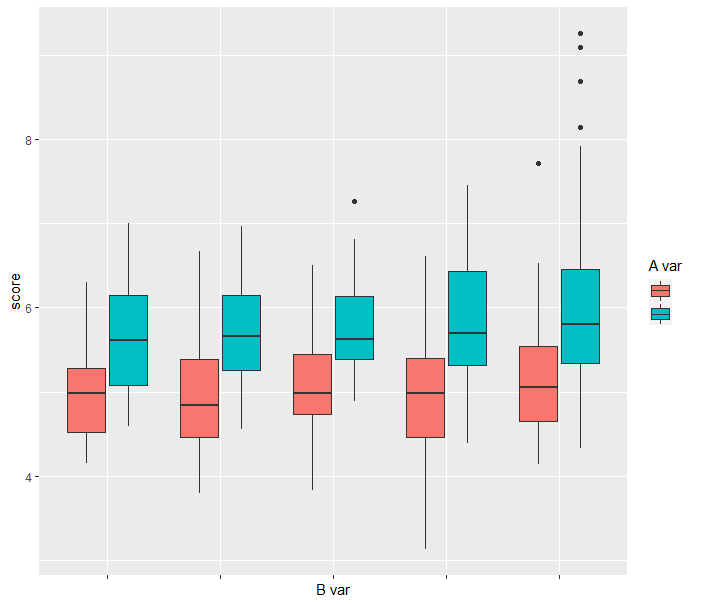 For this other score, there was a difference in A only for some levels of B, notice also the inconsistent the shape of the distribution by levels of B: 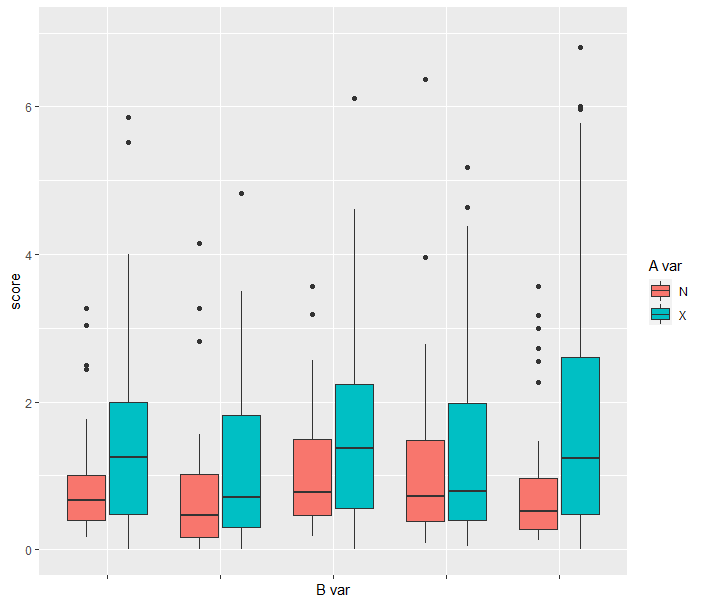 The original plan was to identify the scores that are different between the two levels of variable A across all levels of variable B by using a series of two-way ANOVAs (one for each score), such as some_score ~ A * B. I would then look for scores for which the A main effect is statistically significant while the main effect of B and the interaction term are not significant.

This approach had a few problems: (1) variance between groups was uneven when checking with a Levene test, (2) most scores have asymetrical distributions, (3) descriptive statistics and graphs (e.g. boxplots) comparing the levels of variable A would still be biased by the unequal distribution of variable B.

Update: To identify scores of interest, I used the Scheirer-Ray-Hare test as a non-parametric equivalent of two-way ANOVA. I selected scores that had a main effect for A, no main effect for B. The few scores that had a statistically significant interaction effect between A and B I examined with another non-parametric alternative, the Brunner-Munzel test, and found unsurprisingly that the interaction happened when there was a difference in A only at some levels of B. Another thing that I tried is a modified two-sample K-S test, with similar results. That solved my problems (1) and (2). For the descriptive stats and boxplots (problem 3) there was still an overrepresentation of some strata/cells, so I used a bootstrap methodology (see update below).

Next attempt was to do a bootstrap resampling to control for unequal distribution of confounding categorical variable B, then use a bootstrapped test of stochastic dominance (e.g. Reiczigel et al. 2005) to determine which scores differ across groups. But that raised the problem of how many observations to draw from each "cell" (combination of A and B). Here's some solutions I considered:

Considering that the goal is to simulate a population where B is distributed evenly, is there a robust and reliable way to determine how many observations should be drawn from each cell ?

Update: I used inverse probability sampling, suggested in Nahorniak et al.. This creates subgroups that are even (on average) with less bias than stratified bootstrap (see proposed bootstrap method 3 above). The bootstrap results were used to describe group differences for scores that had been selected.

The usual idea with bootstrapping is to simulate the original sampling from the underlying population of interest. As these are observational data, that would suggest simple bootstrap resampling from all cases regardless of A and B classes. Otherwise you are putting a lot of undue weight on the particular distribution of class combinations that you happened to find in the original sample. An advantage of bootstrapping in this situation is that it would provide an estimate of the variability of those class-combination estimates, which you might need for other purposes.

Five thoughts on your model:

First, it implies that there is an interaction between A and B in terms of some_score. If that's the case (directly testable from the model), then there might be no single measure of the association of A with some_score: that association depends on the level of B. A significant interaction would raise serious questions about your overall approach. If you know the joint distribution of A and B among members of the underlying population you could estimate a corresponding marginal effect of A across the population, but you have to be very careful in how you set that up and interpret such analyses. For example, you should take into account the variability in your estimated distribution of class memberships, if that depends solely on your sample.

Second, that model could easily be applied to the bootstrap samples pretty directly. The "non-normal, asymmetrical distribution" of some_score might be alleviated by some simple transformation, or (depending on the nature of the score) with a generalized linear model (e.g., Poisson model for counts).

You worry that "variance between groups proved to be uneven," but it's hard to get reliable variance estimates from samples on the order of your individual cell numbers. The variance of sample variance is proportional to the square of the variance, with a higher proportionality constant with excess kurtosis, and it drops approximately only with the number of observations.

It's quite possible that an estimate of variance pooled among all the class combinations would model the within-cell variability adequately, so you could assume the homoscedasticity needed to get best linear unbiased estimates of the model coefficients. The distribution of coefficients among models from your bootstrapped resamples could then provide confidence intervals for the estimates, without depending on a normal-error assumption.

Third, consider whether it makes sense to do separate models on all of your scores. It seems likely that many will be correlated so that a true multivariate (multiple-outcome) regression analysis might be superior.

Fourth, consider the suggestion from AdamO to use regression with a sandwich variance estimate. That provides usual coefficient estimates but adjusts the covariances among those estimates to deal with non-normality, heteroscedasticity, etc., for inference. The R sandwich package provides several approaches (including some based on bootstrapping). Those are sometimes called "robust" estimates, but the terminology can be ambiguous, with "robust regression" referring to ways to deal with outliers under homoscedasticity.

Not the answer you're looking for? Browse other questions tagged bootstrap resampling stratification or ask your own question.

9
Restricting minimum subgroup size in a bootstrap resampling study - why is this approach wrong?
84
Can bootstrap be seen as a "cure" for the small sample size?
2
Increasing sample size with bootstrap sampling
6
Bootstrap two-sample t test
8
How does the boot package in R handle collecting bootstrap samples if strata are not specified but the function separates the dataset by strata?
9
Control Function Approach and Bootstrap
2
Sample size is $10^7$, what happens if we bootstrap with replacement using subsample of size $5000$?