When I understand it correctly, a ROC curve composes of a lot of ratios of TPR and FPR. Each such ratio is gained, e.g., by scanning/investigating a parameter where the ratio is the result of the used classifier. In other words: I'm interested in how a classifier separates data points according to a frequency interval of 0-100 Hz. Hence I scan this frequency, record all the 101 ratios, put them into the plot and the ROC curve represents these datapoints, finally. 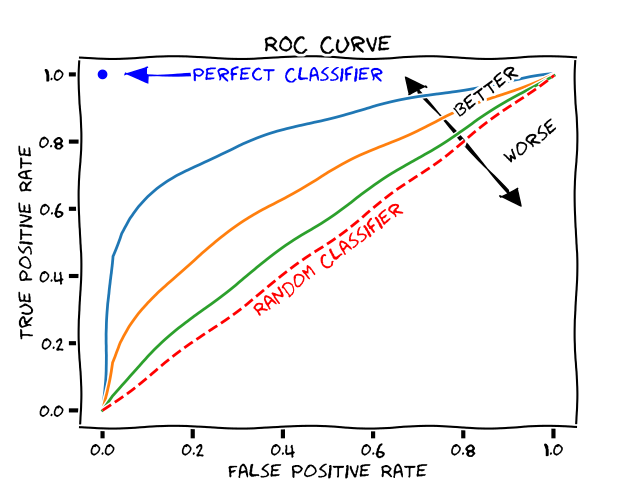 Wouldn't it be much more interesting when the frequency would be used as a third axis? Or is it implicit in the axis? But anyway, I think it would be easier to look at with a third axis?

The ROC curve is two-dimensional because it is defined as the plot of TPR and FPR. Yes, you might be interested in the threshold used to generate the TPR and FPR, and you might want to plot that on a third axis, but then it is not a ROC curve but something else (arguably more informative, arguably harder to draw, arguably so hard to draw that the additional information is not worth the trouble).

Not the answer you're looking for? Browse other questions tagged roc or ask your own question.

4
Why isn't the ROC curve naturally plotted in 3D?

8
Decision threshold for a 3-class Naive Bayes ROC curve
15
ROC curve crossing the diagonal
8
Simple Question about ROC Curve
1
Did I understand ROC curves correctly?
24
Did I just invent a Bayesian method for analysis of ROC curves?
7
Change threshold of classifier based on ROC
2
ROC curve and parameter selection
6
When are ROC curves to compare imaging tests valid? (Focus on the example below)