Infer power from the distribution of a test statistic

Is it possible to infer the power from the distribution of a statistic?

For instance, let's assume we are dealing with a Wald statistic, calculated from 2 survival $\beta$ coefficients. Under the hypothesis of given means and variances of the coefficients, it is possible to calculate the distribution of the statistic:

In this example, there is 2% of the Area Under the Curve of the Wald statistic distribution (black curve) that is greater than 0.

Would the proportion of the AUC that is greater than -0.05 be the power of the test at a 2-sided alpha=0.05?
(Or most likely some other value that my ingenuous, haphazard guess of -0.05)

Since we are assuming some mean and variance already, I'm not sure if we are still under either H0 or H1.

Having the mean and variance of those distributions only matters if the distributions are two parameter families, such as normal distributions. But test statistics under alternative hypotheses usually add a "non-centrality" parameter to the mix, which often behaves like a skewness coefficient, so rarely will those parameters make sense by themselves (without any supporting theoretical results).

Finally, I came to an answer to this question on this website: https://stats.idre.ucla.edu/other/gpower/power-analysis-for-paired-sample-t-test/.

Here is a screenshot of their interface: 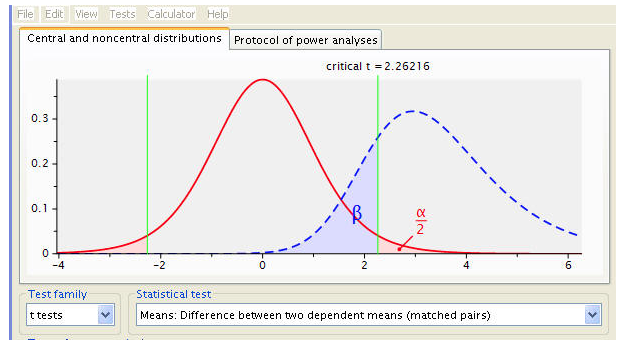 The red curve is used to get the critical t value (here, a t-test) and the power is then computed using the area under the blue curve between t and -t.

They also add a parameter to alter the normality in the alternative hypothesis, but I couldn't manage to understand what.

Not the answer you're looking for? Browse other questions tagged hypothesis-testing statistical-power or ask your own question.