Do you agree with the following statement? Why or why not?

I disagree with this statement but i have no reasons to back up. Anyone can help?

It's possible to set it to zero.

In general it would make for a test with no power.

So I disagree with the statement because - except in a few very special instances - setting it as low as possible makes for a pointless test.*

* [In fact, in the case of point nulls, given that point nulls are almost never exactly true, it may arguably make more sense to set it as high as possible.]

A sensible approach would look at the tradeoff between type I error rate and power - you can get more power (correct rejections) by accepting a higher rate of type I error (false rejections) -- and conversely you can lower type I error by giving up some power. The choice of significance level more properly relates to how you weigh the relative importance of the two in a particular situation. 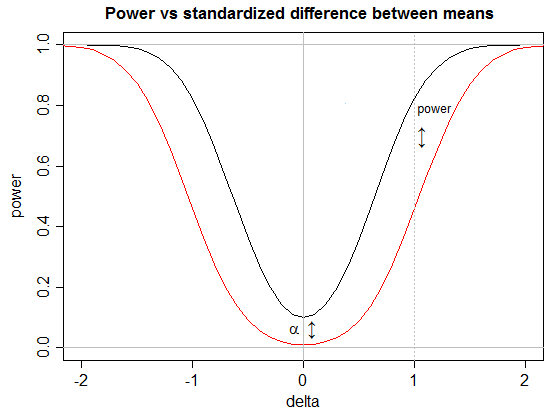 As low as possible is ill defined. You can always make a test with the probability of a Type 1 error 0 but then this test has no power at all. (Think what happens if you take a p-value of 0). You will have to make a trade off between Type 1 and Type 2 errors and what the impact is of each of these errors.

In an ideal world, the probability of type I error would be adjusted on a case by case basis, rather than being set to .05 or .01 or whatever by fiat.

Suppose you are testing a drug that may cure a quickly terminal disease. Then type I error would mean people with the disease die when they could be cured, while type II error means dying people take a drug that does not work.

I'd be willing to have a higher type I error in such a case.

Over and above this, I always prefer looking at effect sizes rather than significance levels. What people care about is how much of an effect a (treatment, drug, condition) is likely to have; not whether a test statistic as extreme as the one we got could have easily arisen from a population where there was no effect.

Usually the statement is false.

The type I error rate relates to the global false positive error rate in a notional series of experiments, and it is useful in planning experiments and for testing hypotheses with an automatic decision rule. In many cases (most scientific cases, in my opinion) the statistician should be concerned with the more local question of what the data allow him to conclude about the state of the world in the context of this experiment. That may involve consideration of the actual p-value (as opposed to determining if it is above or below a threshold in a manner that is consistent with quantitation of long term type I errors) or inspection of a likelihood function or a Bayesian posterior probability distribution.

Even if one is determined to work within a strictly frequentist framework it is sensible to examine the trade-of between type I and type II errors. It is unfortunate that we describe tests in terms that privilege type I errors over all other types of error.

I disagree. Consider a petty crime trial. A prosecutor's null-hypothesis is that you committed a crime. The court considers this hypothesis, otherwise there wouldn't be a trial to start with.

The easiest way to minimize Type I error is to simply accept prosecutor's case, i.e. find you guilty without deliberations. In this case probability of Type I error would be minimal: you will not be acquitted if you did it.

Unfortunately, this will increase the probability of Type II error: you'll be be found guilty even if you didn't do it.

That's why we have presumption of innocence and a trial with competing prosecutor and defense, because sometimes Type II errors cost too much. You have to consider the costs of both errors when deciding on the balance between them.

UPDATE: this is somewhat off-topic, but still interesting.

whuber thinks that presumption of innocence applies to a prosecutor. I'm not a lawyer myself, but I know that it's clearly not the case in USA.

One might have supposed, naively as it turns out, that a person is presumed innocent from the moment police first suspect him until his trial ends and a verdict has been pronounced (supposing things progress that far). One might have supposed, equally erroneously, that all those charged to make decisions about the defendant (judges, grand juries, prosecutors, and so on) are under some duty to presume his innocence.

While such a broad construal of the meaning of PI is common in several countries (at least in theory), the Supreme Court has made it very clear that in American criminal procedure, the PI applies only to the trial itself and, within the trial, only to the jury or other trier of fact.

Apparently, Lord doesn't like both Type I and II errors:

He that justifieth the wicked, and he that condemneth the just, even they both are abomination to the LORD.

In general, there is no consensus on how large one should set the type 1 error. In slightly high-powered language, it doesn't matter when the set of best tests forms a complete class. In such cases, all best tests are admissible, one may choose the type 1 error (size of the test) freely and the choice of type 1 error has no effect on the credibility of inference.

It is traditionally set at lower values, 0.01, 0.05, 0.1 for good reason: in science, rejection is more pronounced than acceptance because it supports the falsification. Rejecting the true is fatal, accepting the false is undesirable, but tolerable. Setting at too low leads to, as demonstrated by @Glen_b, frequent acceptance of the false, so we never know what is true or false.

Not the answer you're looking for? Browse other questions tagged hypothesis-testing mathematical-statistics descriptive-statistics or ask your own question.

7
Why do I get this p-value doing the Jarque-Bera test in R?

4
Analyzing Likert scales
2
How do you treat 'don't know' answers for a composite likert scale?
8
How would one formally prove that the OOB error in random forest is unbiased?
0
Hypothesis Testing using dichotomous and 7-point Likert scale
4
Hypothesis testing based on Likert type data
0
Reverse Code for Factor Analysis
1
How to investigate the appropriateness of the mean as a summary measure of Likert-type items?
2
The link between large p-values and low power?
1
Likert-normality and multiple regression assumptions?
1
Calculate Median Value of Likert Scale data