I have done a last-digit test on a draw of numbers between 1 og 370. Team A drew 64 numbers from the pool, and the last digit of those numbers spread out like this:

Normally one would expect the last digit's to be uniformly distributed between 0 and 9, but in this case the last-digit is 3 in 20,31% of the time.

My question is: What are the chance of this occurring at random? I apologize if this is a to simple question.

Restatement of the question

This must be multiplied by the chance that, when $64-i$ numbers are drawn from the $333$ ones, twos, ..., and nines, none appears more than $12$ times. Summing these chances gives a formula. To write it down, all we need do is give a name to the chances we have been discussing. To this end,

be the chance that when $k$ numbers are drawn (randomly and without replacement) from a set of values as counted by the entries in a vector $x$, none of those numbers will appear more than $m$ times in the sample. We have seen that

An efficient solution is obtained with a dynamic program. It goes through at most $(s+1)(m+1)k$ steps and so can be very fast even for large problems. (A dynamic program effectively performs a recursive calculation, storing intermediate results along the way to avoid recalculating them whenever they might be needed again.)

Here is a Mathematica implementation:

The answer to the question is obtained by the command

with the resulting output (after less than $0.1$ second)

(I have written it out in full to demonstrate that it's unlikely we will find any simple closed formula for the answer.) This is approximately $95.49000$%, indicating the chance of observing $13$ or more of some digit is approximately $4.51000$%. That answers the question.

In the course of this calculation, we will have obtained values of $p(m,k,x)$ for all smaller values of $k$ and all suffixes of $x$, which are conveniently arranged in a two-way table. I use rows for $x$, running from $(x_9)$ to $(x_8,x_9)$ down to the original $(x_0,x_1,\ldots, x_9)$, and columns for $k$ running from $12$ (the smallest value for which any conceivable calculation is needed) through $64$. Here is a plot of the logarithms of $1-p(m,k,x)$ in such an arrangement, with lighter values corresponding to the largest logs:

A clearer picture can be obtained by using a third dimension and restricting the heights to the largest values (corresponding to all probabilities of $0.0001$ or greater): 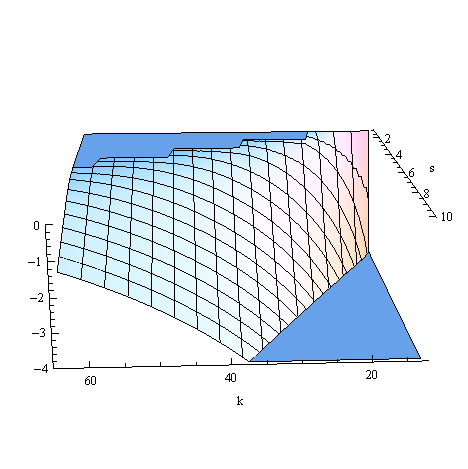 These are base-$10$ logs. The surface has been reflected so that its front boundary corresponds to $s=10$ (all $10$ digits) and the leftmost point on that boundary corresponds to our answer (the common log of $0.0451$ is about $-1.3$). Values along the frontmost row of this surface were computed in terms of values along the next row (where only nine digits have to be considered), which in turn were computed in terms of values along the row behind it (eight digits), and so on until all digits were used up.

A small simulation would help verify whether the preceding analysis and implementation are correct. Let's repeat the experiment a million times and tally the results:

This result--which can be expected to be accurate only to about $3.5$ decimal places (as we will see below)--takes considerably longer than computing the exact result ($6.5$ seconds vs $0.08$ seconds), but gives more information. For instance, it estimates the sampling distribution of the maximum digit count: 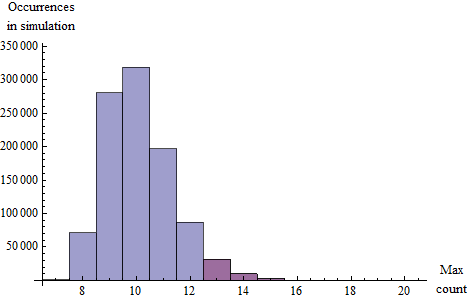 For instance, it is now evident that observing $16$ or more of any digit in this experiment is quite a rare event and that generally we should expect to see the maximum count range from $8$ through $13$ or so. (In order to compute this distribution exactly, we would have to compute $p(m,k,x)$ separately for $m=0$ through $37 = \max(x)$; there is no overlap among the intermediate results. That's a $5$ second calculation, taking about the same amount of time as this simulation.)

A simpler version of the problem

The corresponding chances when sampling with replacement are more easily computed. However, as another test of the Mathematica implementation, let's estimate those chances by making the population larger and larger:

Evidently a limiting value of $90.2078$% is being approached. Its complement, $9.792\ldots$%, is the answer we should get in an analysis that assumes sampling with replacement.

Because the answer differs quite a bit from the previous one--it is twice as great--this is a situation where it would be important to be clear about whether the sampling is with or without replacement. Intuitively, $13$ is a sufficiently large fraction of the $37$ copies of each digit available that by the time $12$ copies have been sampled, it is relatively more difficult to get the $13$th into the sample, thereby lowering the probability that $13$ or more copies will be observed (of any digit).

One way to do this would be by simulation. I think this is correct (but it's early in the morning!)

I got that this happens about 20% of the time, with that seed. You could increase N to get a better estimate.

Please see the comment below.... My code is not quite right.

Not the answer you're looking for? Browse other questions tagged random-generation uniform-distribution or ask your own question.

23
What's the probability that from 25 random numbers between 1 and 100, the highest appears more than once?
3
Transform standard normally distributed numbers into arbitrary normal distribution
4
guessing a 4-digit access code
21
Why is the mean of the natural log of a uniform distribution (between 0 and 1) different from the natural log of 0.5?