How can basis functions in a GAM be described by a single parameter each?

Given a set of data subdivided by n knots, I would expect a cubic spline to be described by at least n + 1 + (n+1)*4 parameters, namely:

To test this I generated data according to a sinusoid pattern using R (after this example):

And I modelled them as: 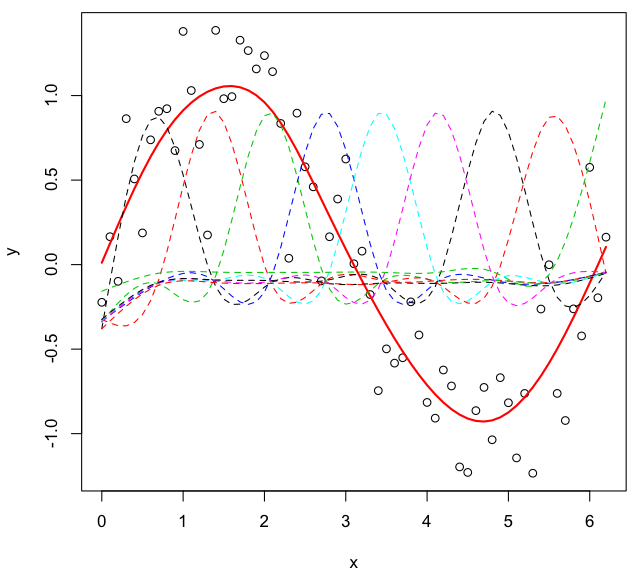 I am clearly confused. Can anyone help me understand how each basis function can be defined by a single parameter?

If we had $n$ knots $\xi_1 < \dots < \xi_n$ and wanted to fit a cubic polynomial on each of the $n+1$ intervals thus defined, then we could do something like $$ f(x) = \sum_{i=0}^n (\beta_{i0} + \beta_{i1} x + \beta_{i2} x^2 + \beta_{i3} x^3) \mathbf 1_{\xi_i < x \leq \xi_{i+1}} $$ (adding knots $\xi_0 = -\infty$ and $\xi_{n+1} = +\infty$ for convenience) and here there are $4 \cdot(n+1)$ parameters. We don't count the knot locations as parameters because we want this to be a linear combination of known basis functions. Specifying the knots in advance like you are doing is treating them like a hyperparameter (we can also dodge the knot issue by using a smoothing spline which shifts the issue to the regularization hyperparameter). Many algorithms set the knots by using either quantiles of x or just an evenly spaced sequence between the smallest and largest values of $x$ in the data, and then we effectively condition on the knots.

The issue with this model is that there's nothing that makes $f$ continuous or smooth. We not only want cubic polynomials between each knots but we want $f$ to be twice continuously differentiable everywhere. We know $f$ already is smooth everywhere that's not at a knot, since it's just a polynomial there, so we only need to make sure things work out on the knots.

All together this means we have $4 + n$ parameters required.

There's one extra complexity in your example. Some of the arguments in s are using default values which change behavior. In particular, you aren't setting k so gam uses choose.k to determine the number of basis functions rather than using the knots. It also penalizes by default so you don't have a standard regression spline as I wrote it above.

Not the answer you're looking for? Browse other questions tagged r mgcv or ask your own question.

6
Smoothing methods for gam in mgcv package?
3
mgcv::gam overfitting
1
Overlaying GAM and LM in R
3
Difference between s() and ti() terms in mgcv package when applied to one variable
5
Thin Plate Regression Splines mgcv?
2
What is the relationship between knots and cubic spline basis functions in GAMs?
1
Inverse functions for GAM