What is the relationship between knots and cubic spline basis functions in GAMs?

I do not understand the relationship between knots and basis functions in Generalized Additive Models (hereafter GAM).

In Chapter 4 of S. Wood's book "Generalized Additive Models - An Introduction with R", Wood uses polynomials to explain basis functions. If I understand correctly, polynomial models qualify as GAM, but they tend to perform poorly due to their excessive "wiggliness". To obviate excessive "wiggliness", tent functions can be used, which are only allowed to assume non-zero values nearby the knots. A GAM based on tent basis functions is a piecewise linear regression.

One way to achieve a GAM that is not too "stiff" (like a piecewise linear regression) and not too "wiggly" (like a polynomial) is to use cubic splines as basis functions.

Am I correct in saying that, in such scenario, the n-th basis function is a cubic spline defined so that it can assume non-zero values in proximity of the n-th knot, while it should tend to zero everywhere else, similarly to how a tent function behaves?

If the statement above is true, how comes that in the following example, a GAM fitted using five knots is based on only four basis functions, and some of the basis functions assume values that are far from zero in regions that are not near any knots? 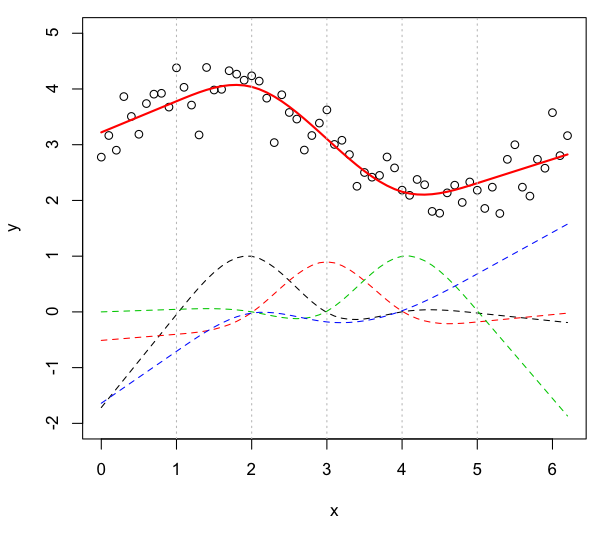 The basis for cubic regression splines that you use here can be found in Table 5.1 of Wood and is explained in Section 5.3.1. You can see that the constraints are on the first two derivatives and the value of the function at the knots, rather than whether or not the basis is non-zero in that area (whatever "area" means). Thinking about the shape of a cubic polynomial is useful for understanding the shape of the basis functions. Figure 5.1 provides a high-level summary of what the spline basis is achieving. Chapter 5 of Elements of Statistical Learning has more on splines. I found it to be a better explanation than Wood in this respect, but Wood is better for other reasons.

As for why there are 4 basis functions. I believe 1 is lost to an identifiability constraint that orthogonalizes the smooth to the intercept term. Again, Chapter 5 (in this case 5.4.1) has all your answers!

Not the answer you're looking for? Browse other questions tagged r generalized-additive-model splines mgcv basis-function or ask your own question.

2
How can basis functions in a GAM be described by a single parameter each?