Type II error: statistically nonsignificant but can be actually similar

I am analysing a rare disease, meaning that a low sample size is inevitable (n = 50 for one group in my case). And I came to a question described as follows.

Could we somehow differentiate the following two non-significance scenarios in terms of interpretation?

A - point estimates are quite the same between the groups

B - point estimates are different but CIs overlap, leading to an insignificant p-value

I have scenario A in my data. Can I somehow say that scenario A provides more evidence to support the non-difference between the groups? How to say it in statistical language? 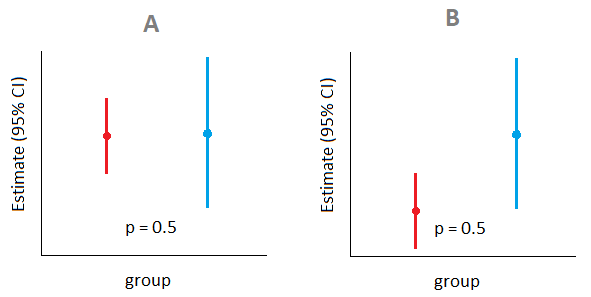 Browse other questions tagged statistical-significance interpretation reporting type-i-and-ii-errors or ask your own question.

0
Type I error question
3
Possible to extend Gelman & Carlin's "Beyond Power Calculations" when significance not obtained?
1
Is a Type III statistical error just a subset of Type I or II error?
0
Calculating type two error without std dev
2
Can you actually prove if the null hypothesis is true or a type II error has occurred?