How can I efficiently model the sum of Bernoulli random variables?

I am interested in quickly answering queries such as $\Pr(Y<=k)$ (where $k$ is given).

Currently, I use random simulations to answer such queries. I randomly draw each $X_i$ according to its $p_i$, then sum all $X_i$ values to get $Y'$. I repeat this process a few thousand times and return the fraction of times $\Pr(Y'\leq k)$.

Obviously, this is not totally accurate (although accuracy greatly increases as the number of simulations increases). Also, it seems I have enough data about the distribution to avoid the use simulations. Can you think of a reasonable way to get the exact probability $\Pr(Y\leq k)$?

I test my null hypothesis vs. one sided alternative (undercoverage). Also note I am testing multiple hypothesis (different x lengths), and sure to correct for this.

If it often resembles a Poisson, have you tried approximating it by a Poisson with parameter $\lambda = \sum p_i$ ?

EDIT: I've found a theoretical result to justify this, as well as a name for the distribution of $Y$: it's called the Poisson binomial distribution. Le Cam's inequality tells you how closely its distribution is approximated by the distribution of a Poisson with parameter $\lambda = \sum p_i$. It tells you the quality of this approx is governed by the sum of the squares of the $p_i$s, to paraphrase Steele (1994). So if all your $p_i$s are reasonably small, as it now appears they are, it should be a pretty good approximation.

EDIT 2: How small is 'reasonably small'? Well, that depends how good you need the approximation to be! The Wikipedia article on Le Cam's theorem gives the precise form of the result I referred to above: the sum of the absolute differences between the probability mass function (pmf) of $Y$ and the pmf of the above Poisson distribution is no more than twice the sum of the squares of the $p_i$s. Another result from Le Cam (1960) may be easier to use: this sum is also no more than 18 times the largest $p_i$. There are quite a few more such results... see Serfling (1978) for one review.

I came across your question while searching for a solution to this very problem. I wasn't terrifically satisfied with the answers here, but I think there's a pretty simple solution that gives you the exact distribution, and is pretty tractable.

The distribution of the sum of two discrete random variables is the convolution of their densities. So if you have $Z = X + Y$ where you know $P(X)$ and $P(Y)$ then you can compute:

(Of course for Bernoulli random variables you don't need to go quite to infinity.)

I've verified with simulation that this produces the correct results. It doesn't rely on any asymptotic assumptions, and has no requirements that the Bernoulli probs are small.

There may also be some way to do this more efficiently than repeated convolution, but I haven't thought about it very deeply. I hope this is helpful to somebody!

(Because this is approach is independent of the other solutions posted, including one that I have posted, I'm offering it as a separate response).

You can compute the exact distribution in seconds (or less) provided the sum of the p's is small.

When most of the $p_i$ are tiny (but the $1 - p_i$ are still distinguishable from $1$ with reasonable precision), this approach is not plagued with the huge accumulation of floating point roundoff errors used in the solution I previously posted. Therefore, extended-precision computation is not required. For example, a double-precision calculation for an array of $2^{16}$ probabilities $p_i = 1/(i+1)$ ($\mu = 10.6676$, requiring calculations for probabilities of sums between $0$ and $31$) took 0.1 seconds with Mathematica 8 and 1-2 seconds with Excel 2002 (both obtained the same answers). Repeating it with quadruple precision (in Mathematica) took about 2 seconds but did not change any answer by more than $3 \times 10^{-15}$. Terminating the distribution at $z = 6$ SDs into the upper tail lost only $3.6 \times 10^{-8}$ of the total probability.

This algorithm is parallelizable. Just break the set of $p_i$ into disjoint subsets of approximately equal size, one per processor. Compute the distribution for each subset, then convolve the results (using FFT if you like, although this speedup is probably unnecessary) to obtain the full answer. This makes it practical to use even when $\mu$ gets large, when you need to look far out into the tails ($z$ large), and/or $n$ is large.

Incidentally, in these test cases, graphs of the distribution clearly showed some positive skewness: they aren't normal.

For the record, here is a Mathematica solution:

(NB The color coding applied by this site is meaningless for Mathematica code. In particular, the gray stuff is not comments: it's where all the work is done!)

An example of its use is

An R solution is ten times slower than Mathematica in this test case--perhaps I have not coded it optimally--but it still executes quickly (about one second): 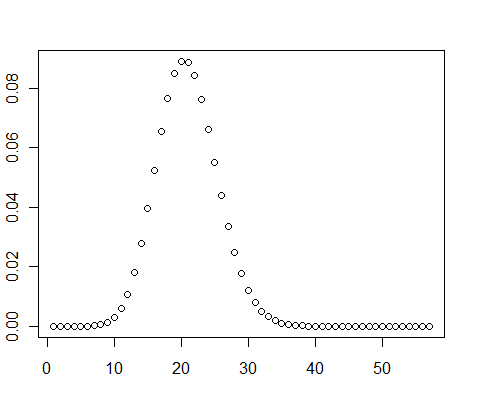 @onestop provides good references. The Wikipedia article on the Poisson binomial distribution gives a recursive formula for computing the exact probability distribution; it requires $O(n^2)$ effort. Unfortunately, it's an alternating sum, so it will be numerically unstable: it's hopeless to do this computation with floating point arithmetic. Fortunately, when the $p_i$ are small, you only need to compute a small number of probabilities, so the effort is really proportional to $O(n \log(\sum_i{p_i}))$. The precision necessary to carry out the calculation with rational arithmetic (i.e., exactly, so that the numerical instability is not a problem) grows slowly enough that the overall timing may still be approximately $O(n^2)$. That's feasible.

An alternative is to run a long simulation (a million trials ought to do). It only has to be done once, because the $p_i$ don't change.

Update: The approximation error can be calculated from the following inequality:

Well, based on your description and the discussion in the comments it is clear that $Y$ has mean $\sum_i p_i$ and variance $\sum_i p_{i}(1-p_{i})$. The shape of $Y$'s distribution will ultimately depend on the behavior of $p_i$. For suitably "nice" $p_i$ (in the sense that not too many of them are really close to zero), the distribution of $Y$ will be approximately normal (centered right at $\sum p_i$). But as $\sum_i p_i$ starts heading toward zero the distribution will be shifted to the left and when it crowds up against the $y$-axis it will start looking a lot less normal and a lot more Poisson, as @whuber and @onestop have mentioned.

From your comment "the distribution looks Poisson" I suspect that this latter case is what's happening, but can't really be sure without some sort of visual display or summary statistics about the $p$'s. Note however, as @whuber did, that with sufficiently pathological behavior of the $p$'s you can have all sorts of spooky things happen, like limits that are mixture distributions. I doubt that is the case here, but again, it really depends on what your $p$'s are doing.

As to the original question of "how to efficiently model", I was going to suggest a hierarchical model for you but it isn't really appropriate if the $p$'s are fixed constants. In short, take a look at a histogram of the $p$'s and make a first guess based on what you see. I would recommend the answer by @mpiktas (and by extension @csgillespie) if your $p$'s aren't too crowded to the left, and I would recommend the answer by @onestop if they are crowded left-ly.

By the way, here is the R code I used while playing around with this problem: the code isn't really appropriate if your $p$'s are too small, but it should be easy to plug in different models for $p$ (including spooky-crazy ones) to see what happens to the ultimate distribution of $Y$.

Now take a look at the results.

Have fun; I sure did.

I would suggest applying Poisson approximation. It is well known (see A. D. Barbour, L. Holst and S. Janson: Poisson Approximation) that the total variation distance between $Y$ and a r.v. $Z$ having Poisson distribution with the parameter $\sum_i p_i$ is small: $$ \sup_A |{\bf P}(Y\in A) - {\bf P}(Z\in A)| \le \min \left\{ 1, \frac{1}{\sum_i p_i} \right\} \sum_i p_i^2. $$ There are also bounds in terms of information divergence (the Kullback-Leibler distance, you may see P. Harremoёs: Convergence to the Poisson Distribution in Information Divergence. Preprint no. 2, Feb. 2003, Mathematical Department, University of Copenhagen. http://www.harremoes.dk/Peter/poisprep.pdf and other publications of P.Harremoёs), chi-squared distance (see Borisov and Vorozheikin https://link.springer.com/article/10.1007%2Fs11202-008-0002-3) and some other distances.

I think other answers are great, but I didn't see any Bayesian ways of estimating your probability. The answer doesn't have an explicit form, but the probability can be simulated using R.

Here is the attempt:

Using wikipedia we can get estimates of $\hat{\alpha}$ and $\hat{\beta}$ (see parameter estimation section).

This analysis is valid only when $p_i$ are not fixed. This is not the case here. But I will leave it here, in case someone has a similar question.

The approach is to efficiently compute the DFT (discrete Fourier transform) of the characteristic function.

The algorithm is available in the poibin R package.

This approach gives much better results than the recursive formulations as they tend to lack numerical stability.