The realistic probability of winning a best of 7 series (i.e., excluding all unreal and redundant combinations) where the first game is already lost?

I want to know the probability of winning a best of 7 series (i.e., win 4 games out of 7) where the first game is already lost. There are some people who advocate taking all possible theoretical combinations, but that doesn't give us the true probability since some combinations are just not possible in real life (redundancies).

Example 1: Best two out of three Heads wins the series (no games have been played yet).

Option A1: Include only realistic combinations and remove redundancies:

Option B1: Include all theoretical combinations:

As you can see in the above example (when no games have been played yet) the probability of winning the series is the same for both options. So it doesn't really matter if we include the redundancies or not.

However, when the first game is already lost, the two options provide different probabilities of winning the series.

Example 2: Best two out of three Heads wins the series, but the first is already a Tail.

Option A2: Include only realistic combinations and remove redundancies:

Here, the probability of winning the series is 1/3.

Option B2: Include all theoretical combinations:

Here, the probability of winning the series is 1/4, not the same as the one before.

Doing this exercise by hand for a 7 game series is going to be a very lengthy process. I want to know how I can do this in R using simple functions or Monte Carlo simulations (no negative binomial).

Here is how I found the probability of winning the series given the first game is lost, but this includes all theoretical combinations/redundancies:

Question: How do I find the realistic probability of winning a best of 7 series (i.e., excluding all unreal and redundant combinations) where the first game is already lost?

If you assume that each game is independent, with an equal probability of each outcome, then the problem is quite simple (and as whuber points out in the comments, this is the classical "problem of points"). The solution is computed using the binomial distribution, which does consider all possible cases.

Under these assumptions, you can proceed easily for the general case where we have two players playing a tournament which is best-out-of-$n$ games (where $n$ is a positive odd number), where $0<\theta<1$ is the fixed probability that the first player will win a game. Suppose that the current score is $p_1$ points to the first player and $p_2$ points to the second player (so we must have $p_1+p_2 \leqslant n$ with both values non-negative). Let $X \sim \text{Bin}(n-p_1-p_2, \theta)$ denote the number of remaining games that will be won by the first player. The total points for the first player will be $p_1+X$ and the total points for the second player will be $n-X-p_1$. To facilitate our analysis, we define the bound:

The probability that the first player wins is:

It is simple to implement this as a function in R as follows. (I have included checks on the inputs, but these can be removed if you prefer a more parsimonious version of the function.)

Your question is based on an incorrect premise: that impossible paths are somehow statistically invalid. Instead, the probabilities represented by those paths still add up to the probability of getting to the leg that stopped further play.

The simplest way to calculate the answer is to look at binomial distributions of all permutations, including the "impossible" routes you've ignored.

Here's the full range of possibilities for a best 2 of 3 coin toss: 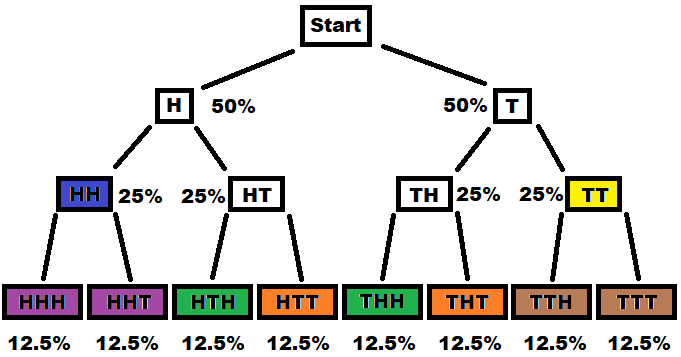 The white nodes are undecided states. The blue node wins for heads before finishing all three rounds, while the yellow wins for tails prematurely. The purple and pink nodes are unreachable. The green and orange nodes represent wins decided by the third coin toss.

To find the odds that heads wins, we need to find the probability of each win condition, then add up those probabilities. One way is to look at the bottom row. There are two purple nodes and two green nodes, each of which represents a win. Each one has a 1/8, or 12.5%, probability. Adding the four of them gives us a total probability of 50%.

Another way is to short circuit at each node where the game is already decided. In this case, there are three nodes where heads wins. But note that the odds of each node are not the same. There's a 25% chance of winning at the blue node, then two chances of winning at the green nodes, with a 12.5% chance each. Although there are fewer nodes, then total is still a 50% chance of winning. Of importance is that the odds of getting to the blue node is exactly the sum of odds of each of the purple nodes.

So let's go to the circumstance where tails has already won the first round. 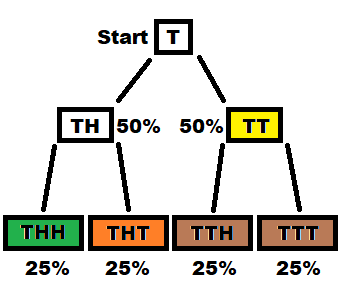 Winning a Best of N Game, Given You've Already Lost A Round

In any best of N game, the win condition is that you've won $\frac{N}{2}+1$ or more rounds. Calculating the odds given existing wins or losses really just boils down to counting how many more rounds there are, and how many you need to win from here.

In a best of 7 game, you need to win at least 4 rounds. If you've already lost 1 of 7, there are 6 more rounds, and you still need to win 4 of them. The math has already been done in Ben's answer, so I'm not going to replicate it here. We can also look at this math.se answer by Graham Kemp to a question nearly identical to yours. It's the same math as Ben's answer uses, but in a different format that might be helpful.

Not the answer you're looking for? Browse other questions tagged r probability or ask your own question.

3
Probability of Game Outcomes (with ties!)
2
Getting series outcome probabilities based on individual game probabilities
0
What is a sub-collection of events when trying to define mutual independence?
16
Probability of winning a competition K games best of series of N games
1
NBA finals - home teams are expected to win, yet phx suns series win probability increased after winning g1 and g2 at home. how to explain?