I'm having a hard time trying to understand the differences between these two models and why the first one shows correlation (p-value < 0,05) but the other one doesn´t (p-value > 0,05).

I would be very grateful if someone could help me, because I have to submit my thesis soon.

In this study we want to assess if the human balance improves after training. 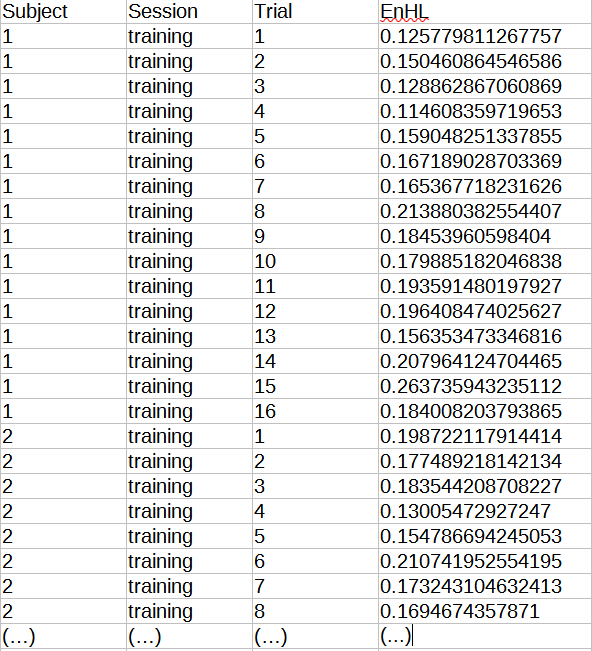 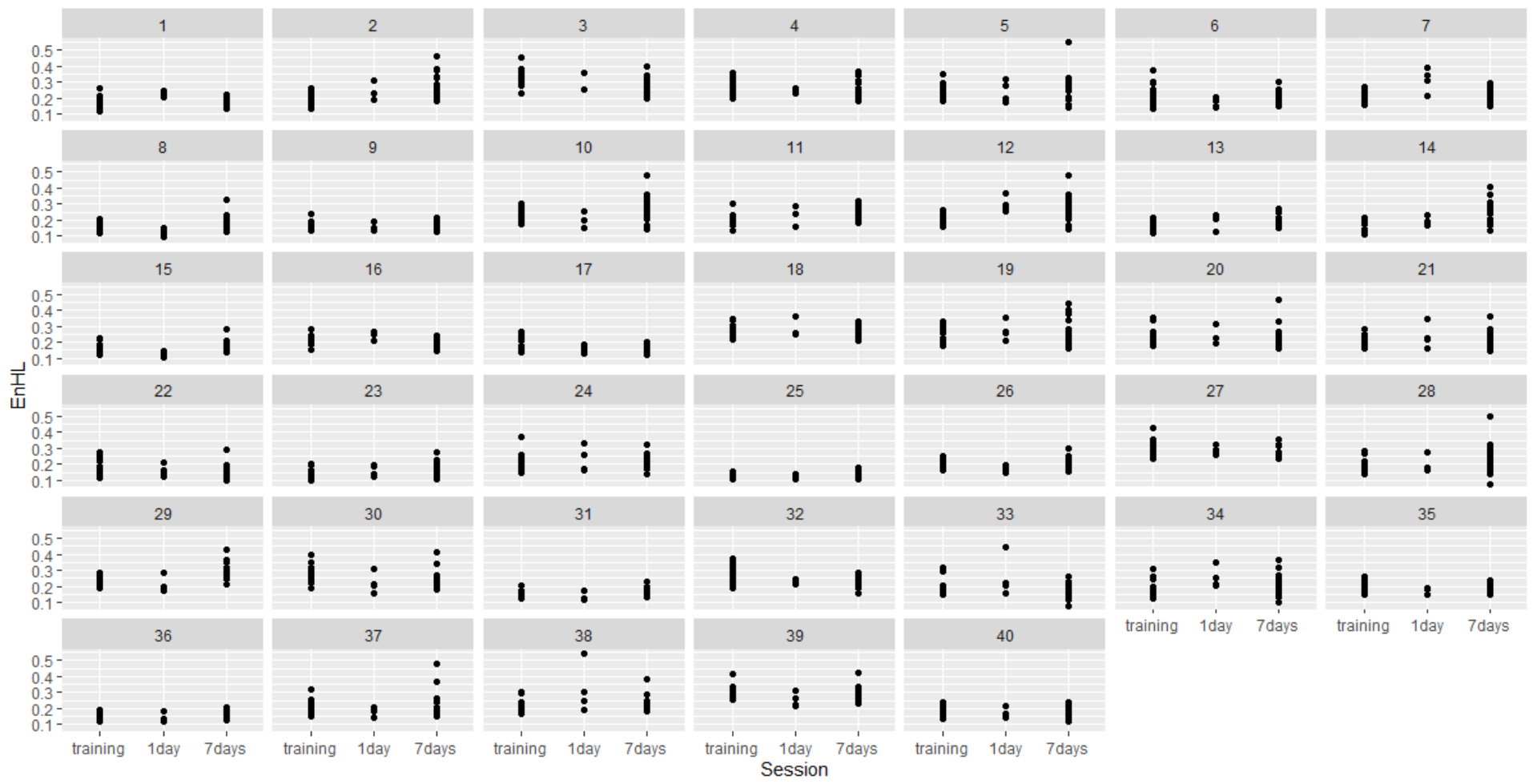 My question is: what model would be more accurate?

here the p-value for the trials and for the sessions is less than 0,05 (there's a relationship between sessions (after 7 days) and EnHL and between trials and EnHL)

where I´m assuming that the sessions are allowed to vary between the subjects. (If this wasn't the case nothing should change, right?)

With this model there are no correlations between sessions and EnHL or between trials and EnHL anymore (p-value > 0,05).

The function anova(gamma, gammacrs, test = "Chisq") tells us that the second model is better.

My interpretation of the results is: The sessions and the trials are different for every subject. Some of them improve but others don't (the differences between subjects are important). What do you think?

I've extracted all the random effects. 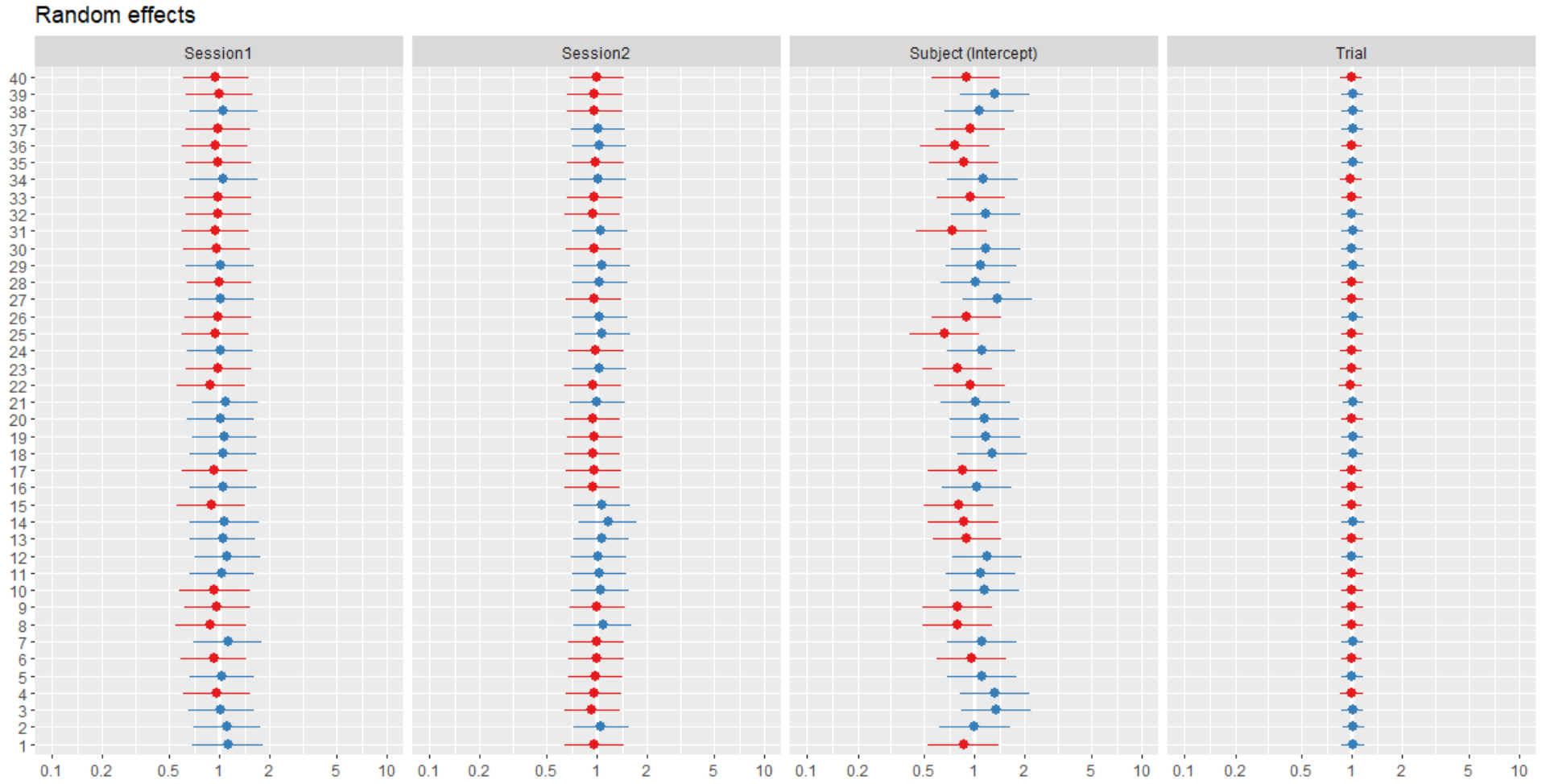 Note 2 : The plot doesn't exactly match the "coef" table. Some red points are positive in the table. Is this because of the standard error?

Another point to bear in mind is that p-values are not well defined for mixed models - they are computed based on an approximation for the denominator degrees of freedom. Therefore the p-values are also approximations. This in turn means that any "rule" based on a cut-off value of significance, such as 0.05, which is already a highly questionable procedure, even for well-behaved estimates, should not be applied blindly with mixed models.

My interpretation of the results is: The sessions and the trials are different for every subject. Some of them improve but others don´t (the differences between subjects are important)

I'm not really sure how you arrived at this, but I don't think it's correct.

First of all, it looks like the reference level for Session is "day 1". This means that the other estimates for Session are contrasts with day 1. To me this does not really make sense because the variable is time: 0 (training), 1 and 7 days. So, the estimate Session7days is the expected difference in the outcome between 1 and 7 days, whereas the estimate Sessiontraining is the expected difference in the outcome between day 0 (training) and 1 days. For me, it would make more sense to have 0 (training) as the reference level, with the 1 and 7 day estimates being the expected difference in outcome compared to day 0 (training). It's OK if you want to retain day 1 as the reference level, but I just think it makes more sense to have the reference as 0. Anyway, regardless of that, it appears that you have a nonlinear association with respect to time. Compared to day 1, day 0 is 0.01 higher, whereas, compared to day 0, day 7 is 0.04 higher. This that the overall/global response falls slightly from day 0 to day 1 and then increases from to day 1 to 7.

As for Trial, the "effect" is negligible (ie very small). This may be because it should not be in the model in the first place. From what I can understand of the description, the Trial variable is simply an ID to count the number of repeated measures within subject, right ? So trial 1 in subject 1 has nothing to do with trial 1 in subject 2, right ? If so, then Trial should not be in the model at all. However, if there is something shared between trials - such as all subjects doing the same trial number at the same time/place (or some other condition), then it should be retained.

Edit: To extract the random effects and visualise them.

Obviously I don't have access to your model and code, so I will just use some boilerplate code that I often use for this type of thing, to simulate data for a simple model with random slopes and random intercepts. You should be able to adapt it to your situation easily:

Now we can fir the model:

Note that we recover good estimates of all the parameters.

Also, note that if we instead fit a model without random slopes, as in your situation, the p-values will be smaller:

Anyway, back to our model with random slopes, m0. To extract the random effects we simply use coef()

so we can extract just the random slopes with:

Here we can see that some these values are all quite large in comparison to the fixed effects for X, 0.25, which is reflected in the lower p-value for the model without random effects.

In your case you will use coef(m0)$Subject['Session7days'] to get the random effects for Session7days.

So you can plot these however you feel is best.

You might want to make use of the sjPlot package which is able to produce many types of plots for mixed models: http://www.strengejacke.de/sjPlot/reference/sjp.lmer.html 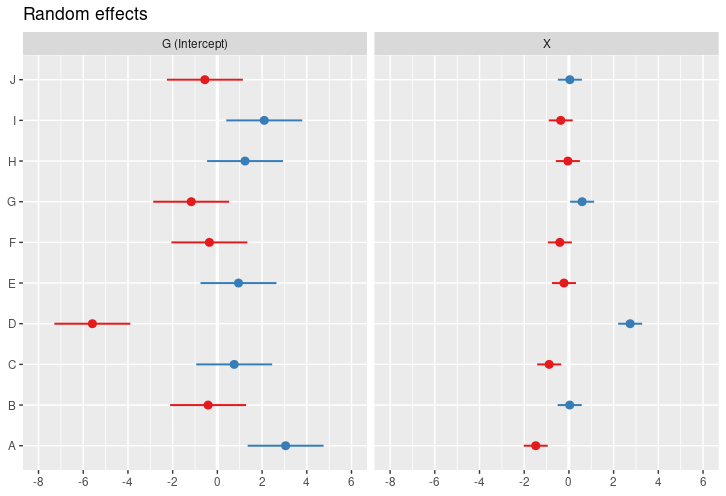 Finally, regarding confidence intervals, you can use:

Not the answer you're looking for? Browse other questions tagged r mixed-model random-variable interpretation intercept or ask your own question.

41
Interpretation of p-value in hypothesis testing
22
What is the difference between "testing of hypothesis" and "test of significance"?
3
Does the interpretation of fixed effects depend on random-effects specification? (example provided)