causal graph - counting the number of backdoor paths in a DAG

I am following "A Crash Course in Causality: Inferring Causal Effects from Observational Data" on Coursera.

I am struggling at correctly identifying backdoor paths in causal graphs (or DAG for Directed Acyclic Graph).

The following DAG is given in example in week $2$'s video on the "backdoor path criterion". 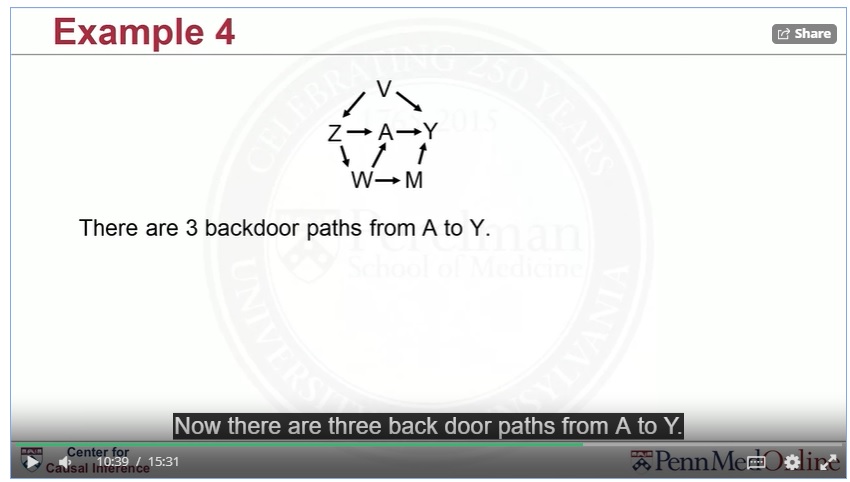 In the same week quiz, we are asked to count the number of backdoor paths on this DAG:

Where am I wrong?

For Example 1, you are correct. $A\leftarrow Z\to W\to M\to Y$ is a valid backdoor path with no colliders in it (which would stop the backdoor path from being a problem).

In Example 2, you are incorrect. The definition of a backdoor path implies that the first arrow has to go into $G$ (in this case), or it's not a backdoor path. Only $G\leftarrow E\leftarrow D\to A\to B$ satisfies that criterion.

Not the answer you're looking for? Browse other questions tagged causality dag causal-diagram or ask your own question.

5
Causality: Structural Causal Model and DAG
6
What justifies adjusting for proxy variables in the DAG causal inference framework?
18
Is it appropriate to use "time" as a causal variable in a DAG?
8
Convincing Causal Analysis using a DAG and Backdoor Path Criterion
6
Causality: Models, Reasoning and Inference, by Judea Pearl: Causal Bayesian Networks and the Truncated Factorization
7
DAG: no back-door paths but background information shows a need for adjusting
4
Causal inference - difference between blocking a backdoor path and adding a variable to regression