Get accurate eigenvectors, when eigenvalues are minuscule

I have a symmetric matrix A. I'm not able to compute all the eigenvectors accurately, and I believe it is due to the last few eigenvalues for A being really, really minuscule.

Is there a method / library that will allow me to get really accurate eigenvalues/vectors, even if it's incredibly slow? (in R or Python)

(One suggestion was to iteratively eliminate the biggest eigenvalue/vector using "projectors", but I'm not sure how to go about this / if it would work)

Some context: The matrices I'm considering are basically Fisher Information matrices produced by taking the Hessian of the outputs of many-parameter models, each with significant internal parameter "redundancies", which you can uncover from an eigendecomposition. (It's not unusual to get really high condition numbers in these situations, as described here: https://www.lassp.cornell.edu/sethna/Sloppy/WhatAreSloppyModels.html.)

Here's some R code with an example of a matrix I'm interested in.

The problem is due to "leakage" from the large eigenvectors. I will present a brief analysis and then offer a solution, with code, followed by some remarks about the nature and limitations of the solution.

Let the eigenvalues of a real symmetric matrix $\mathbb M$ be $\lambda_1,\lambda_2,\ldots,\lambda_d$ ordered by decreasing absolute value so that $|\lambda_1|\ge |\lambda_2|\ge \cdots \ge |\lambda_d|.$ The objective, as stated in a comment to the question, is to find vectors $x$ so that $\mathbb{M}x$ is relatively small. Because the mapping $x\to\mathbb{M}x$ is linear, we may focus our study of such $x$ on those of unit length.

The Spectral Theorem guarantees the existence of an orthonormal basis $\{e_1,e_2,\ldots, e_d\}$ of corresponding eigenvectors in which $x$ may be expressed as the linear combination

The orthonormality assures us that

These aren't quite eigenvectors anymore, as we may check by applying $\mathbb M$ to them:

Notice, in particular, that when $\lambda_i$ is tiny compared to $\lambda_1,$ the appearance of the multiple $\alpha_{i1}\lambda_1$ of $e_1$ can hugely alter the result, even when $\alpha_{i1}$ is tiny, due to that multiplication by $\lambda_1.$ This is the crux of the matter.

The problem propagates when applying $\mathbb{M}$ to the linear combination

Fortunately there's a simple solution: remove the unexpected eigenvectors from the result. When (say) the first $k$ coefficients of $x$ are zero, $\xi_1=\xi_2=\cdots=\xi_k,$ then *there should not be any multiples of $e_1$ through $e_k$ in $\mathbb{M} x.$ We can remove them by projecting the result of $\mathbb{M}x$ onto the space generated by $e_{k+1},\ldots, e_d.$

Let's see how this works with the matrix $\mathbb M$ of the question. Here $k=8$ and $\lambda_1\approx 1111$ and $\lambda_2 \approx 5\times 10^{-8}$ are much greater than any of the other eigenvectors. The appearance of tiny negative eigenvalues in a setting where (one assumes) non-negative values are expected is further evidence that the last six (really seven) eigenvalues might just be noisy versions of zero.

The R code below creates random vectors $x^\prime$ in the space generated by the last $8-2=6$ eigenvectors. It applies $\mathbb M$ to them in two ways: directly as $y=\mathbb{M}x^\prime$; and with the "projection method" in which $y$ is regressed against the first two eigenvectors. It returns the norms of those two results. We hope that the norms will be really tiny, because $\mathbb M$ shouldn't change the norm by more than $\max\{|\lambda_3|,\ldots, |\lambda_8|\}\approx 6.25\times 10^{-8}.$ To see what it really does, I plotted histograms of the two sets of results (left and middle). To compare the two approaches I also drew their scatterplot at the right.

The direct method (left) is awful: a considerable amount of $e_1$ has leaked into the eigenvectors, causing the norms to be inflated by approximately ten(!) orders of magnitude. After projecting the first two eigenvectors out, the norms are always of the expected magnitude. The scatterplot shows no relationship among the results. (In some cases, for other matrices $\mathbb M,$ there are some intriguing relationships induced by the magnitudes of the error coefficients $\alpha_{ij}.$)

This solution guarantees that the result of computing $\mathbb{M}x$ will be orthogonal to the largest eigenspaces and will, with an accuracy relative to the magnitudes of the largest eigenvalues, reflect how much $\mathbb M$ affects the lengths. That's probably all that's needed in the intended application.

There's no prospect of doing any better, either. Many of the entries in matrices like $\mathbb M$ were already computed using floating point arithmetic and therefore cannot be considered any more precise than the results of those operations. The large condition numbers of matrices like $\mathbb M$ guarantee that even using infinitely precise arithmetic, the effects of either (a) changing any entry in $\mathbb M$ in its least significant bit or (b) changing any coefficient of $x$ in its least significant bit will hugely perturb the result.

The svd (singular value decomposition) function in R does a better job of computing the eigenvalues and vectors. This doesn't improve the direct calculation of $\mathbb M$ appreciably, though. If you would like to compare these methods, replace the line eig <- eigen(m) by eig <- with(svd(m), list(values = d, vectors = u)).

This picks up after the definition of m in the question and the calculation of its eigenvectors using eigen.

Whuber has already done a better job of that than I could of answering the question, but I have some figures I generated for other work may help illustrate some of the issues. A similar version is in the supporting information associated with this paper on visual exploration of PCA for spectroscopists (open access)

Whuber indicated that SVD is good for accurate calculation of eigenvalues and vectors, and from my reading that is a widely held opinion, this arises from the use of matrix decomposition on the covariance matrix, which has the consequence that all eigenvectors are solved in conjunction and computation errors are spread over them all. Sequential/iterative methods such as the power method (sequential fitting of covariance matrix) or NIPALs (sequential fitting of residual) in contrast accrue errors in each eigenvector calculation and these can build up to the point they over power very low variance eigenvectors.

In that paper I had implemented PCA using NIPALs and as a sanity check I published data in the supporting information comparing the results to an established python function that used SVD. The first PC was very similar for both algorithms: 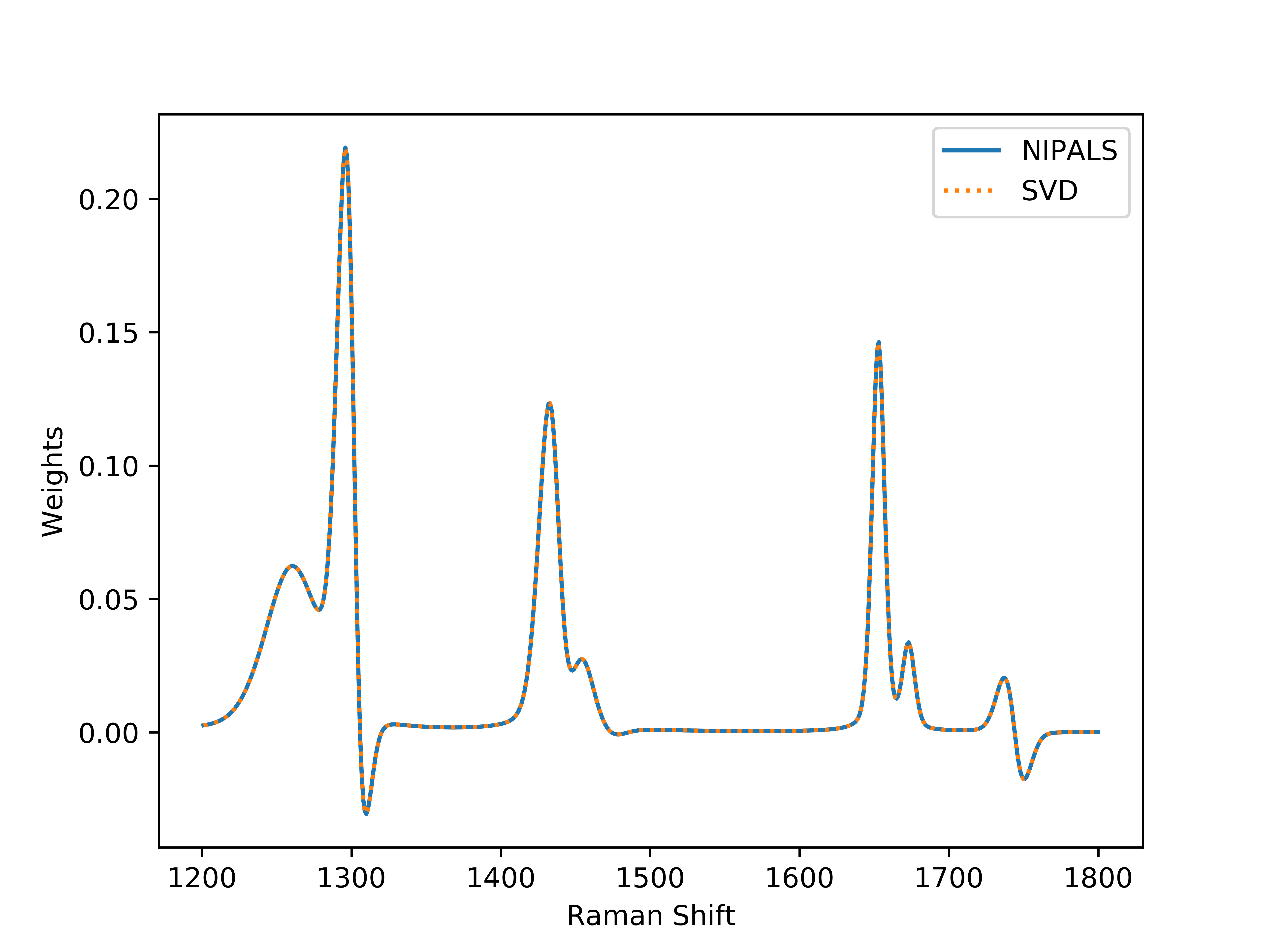 The difference between them was miniscule ($10^{-15}$), on the order of computational accuracy: 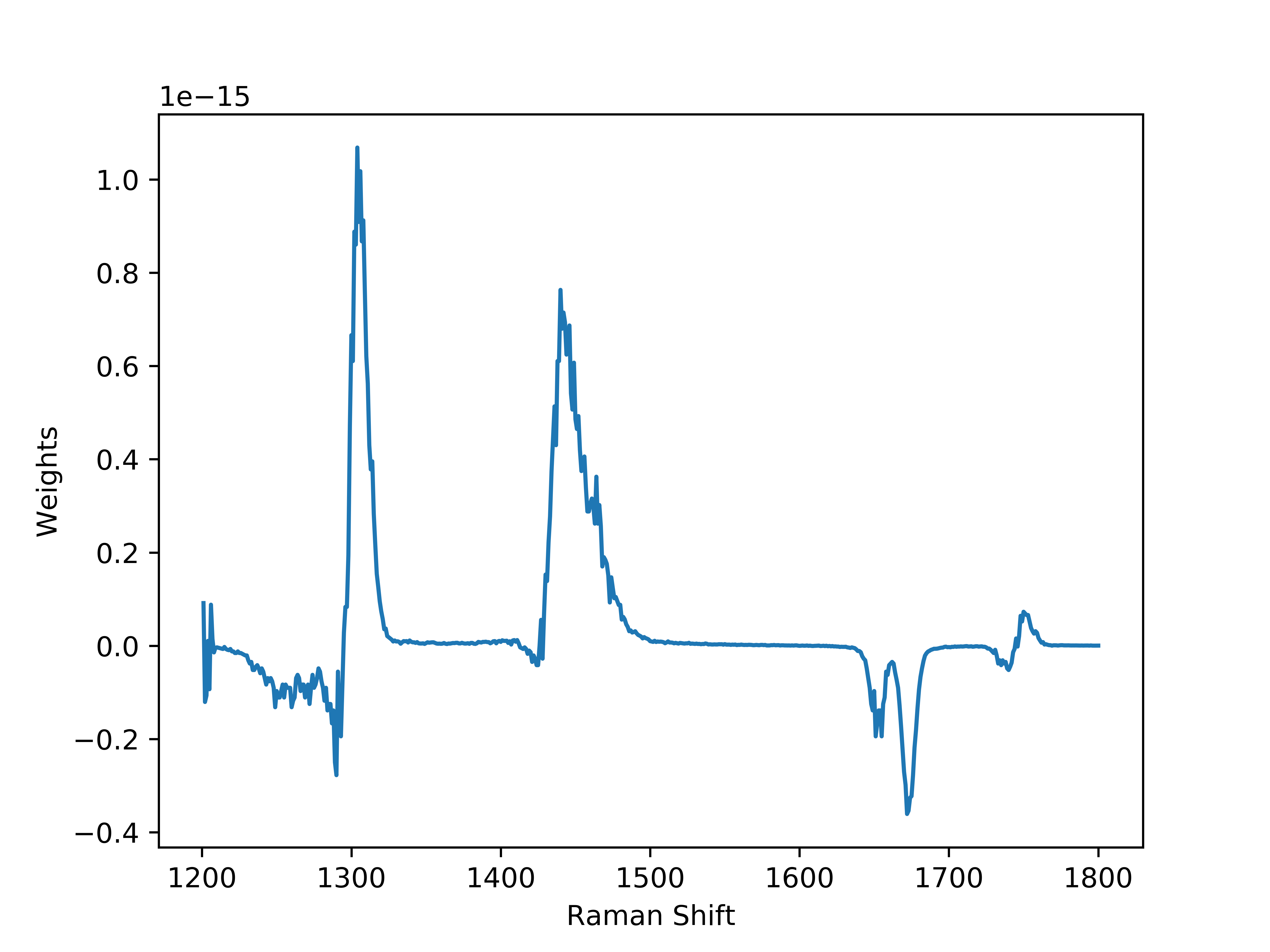 The difference was dependent on the specified tolerance for the NIPALs algorithm. Next we see a plot of the SVD rank against the NIPALs rank for the SVD-eigenvector that the NIPALs eigenvector most closely correlated with: 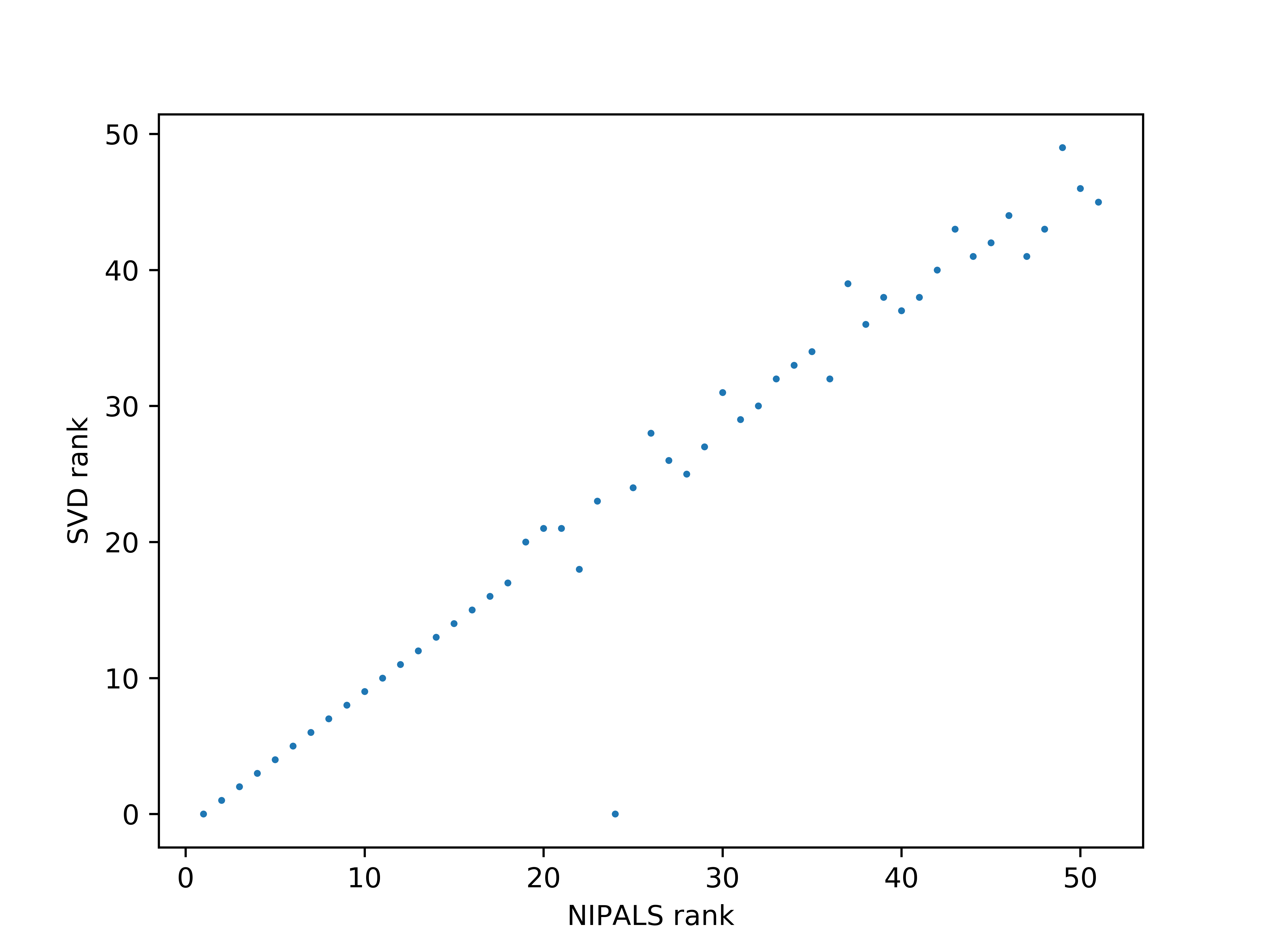 At first the rank is perfectly correlated, until we hit NIPALS PC24 where things get wobbly. NIPALS-24 is suddenly best correlated with SVD-1! Above NIPALS-24 the correlations get really messed up. It is not limited to rank, but actual eigenvector shape becomes much less consistent (even if we match by optimum correlation), as seen if we plot the correlation between SVD/NIPALs vs NIPALs rank: 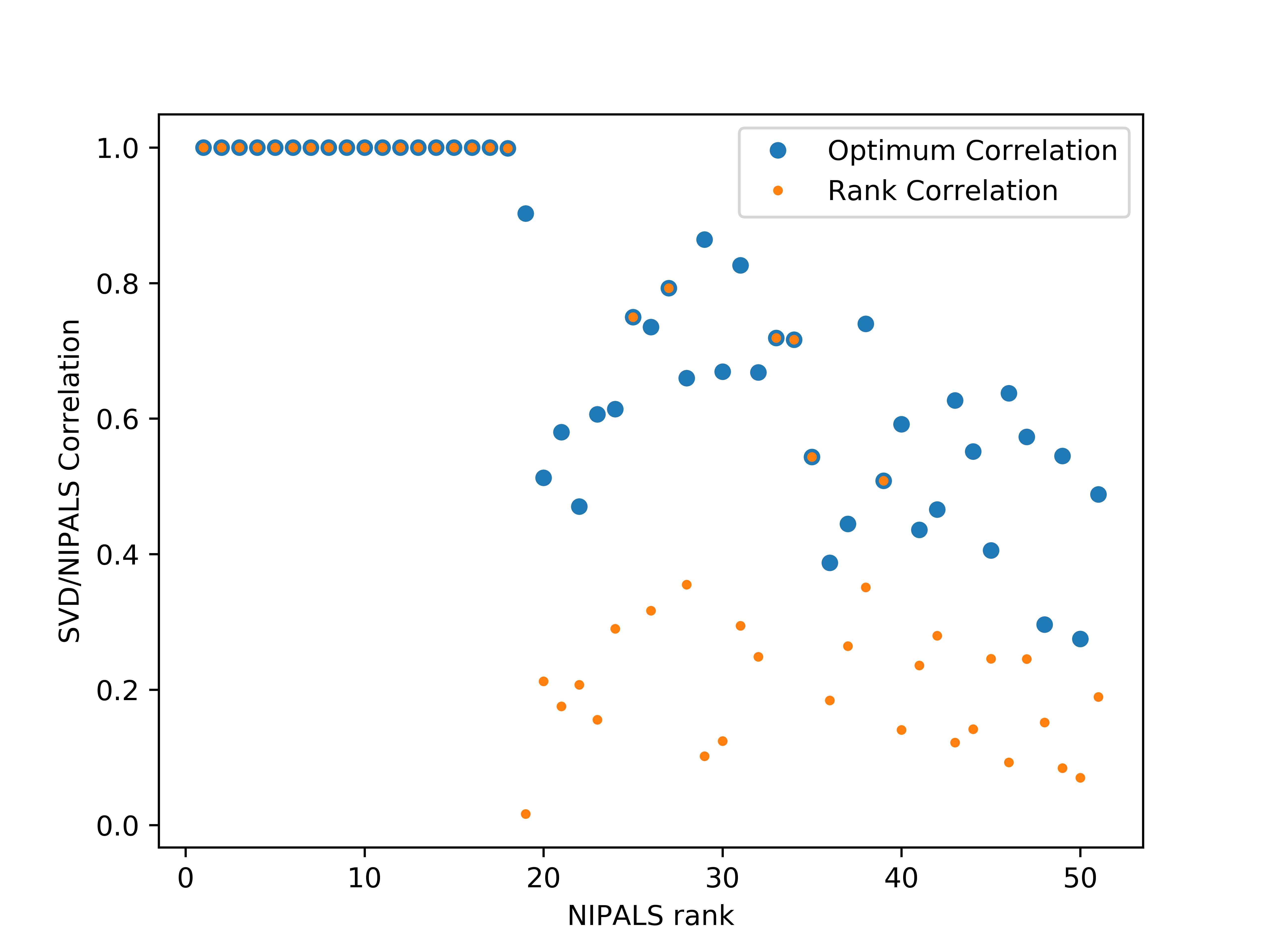 This shows that information in the lower rank PCs is getting muddled up in the NIPALS wrt to SVD. If we look at SVD-1 (blue) and NIPALS-24 (orange) and the difference between them (green) we can seen that the two are indeed very similar and the difference is very noisy. 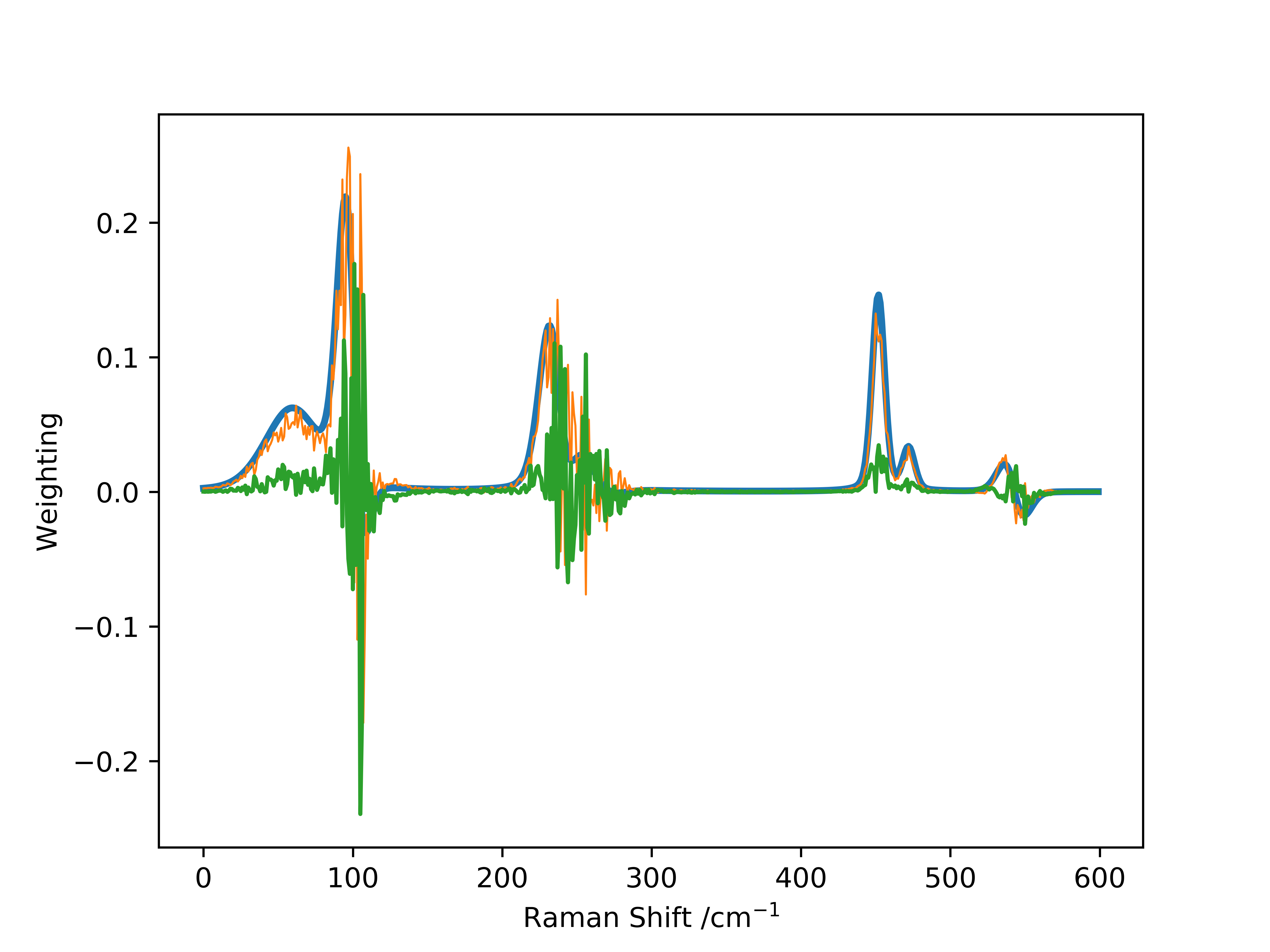 As you mention in the OP and Whuber mentions, this is usually handled by projection which also goes by the name of renormalisation or re-orthogonalisation . The process starts by applying the $PC_{1-i-1}$ eigenvectors to the residual and reconstructing (inner product of scores and eigenvectors), then recalculating the residual. If we done this after NIPALS-23 then the residual would have popped up as mostly NIPALS-1. Reconstructing the data at this point would have created a residual without the NIPALS-1 ghost and therefore would not have caused the same level of problems.

As Whuber indicates it is not possible to achieve infinitesimal accuracy, so it is a matter of what limits of precision do you need.

If your eigenvalues are "sloppy" then the eigenvectors will necessarily be "sloppy" too. With a condition number on the order of $10^{17}$ as in your example, I'd be wary of any results you got regardless of what numerical approach you use.

The solution is to avoid this type of problem before it starts.

You don't provide details about the "multi-parameter models" that you're trying to fit, but something seems to be terribly wrong. For an 8 x 8 Hessian matrix, there is only 1 eigenvalue of any substantial magnitude.

I suspect that there is substantial multicollinearity in your data, although other problems like an over-specified model might also be in play.

My first reaction is to use principal components of your data as predictors instead of the raw data. If multicollinearity is to blame for your problem, using just a few principal components could turn that weakness into a strength. Think also about whether the structure your model is contributing.

Not the answer you're looking for? Browse other questions tagged r python algorithms eigenvalues numerics or ask your own question.