I am still a beginner when it comes to survival analysis. I have fitted a parametric (Weibull) survival regression model with time-dependent covariates using the R package flexsurv via:

I included a random effect to account for repeated trials by subjects (I assume the cluster() in the formula to take care of that).

When plotting the fitted model object via plot(fitParam), it seems to match decently well with the data: 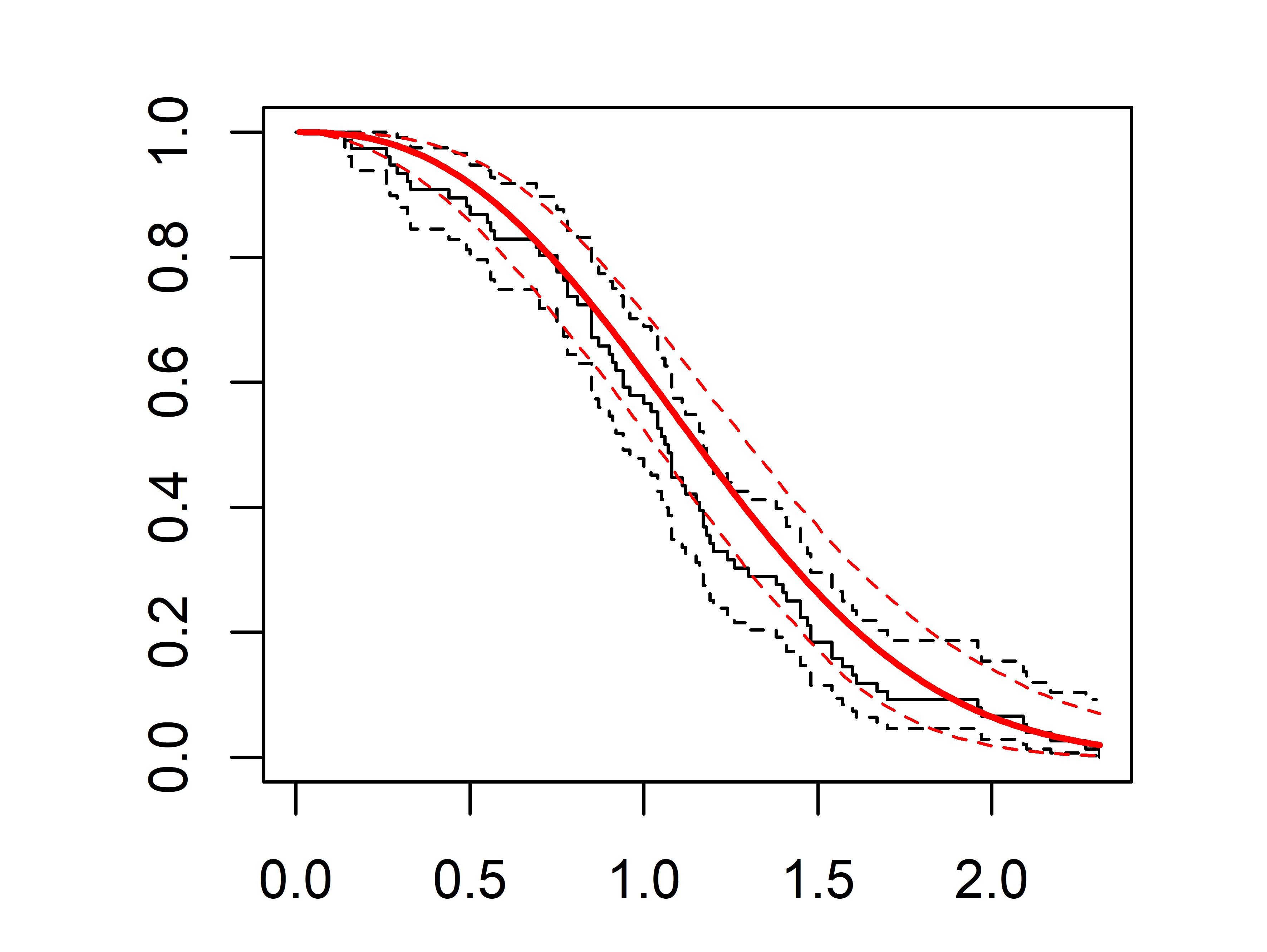 This gives the output:

I actually tried fitting a Weibull model only using the shape(a) part, without b in the formula. The resulting model seems to visually fit the data better (see below), but has a higher AIC than the model shown above. 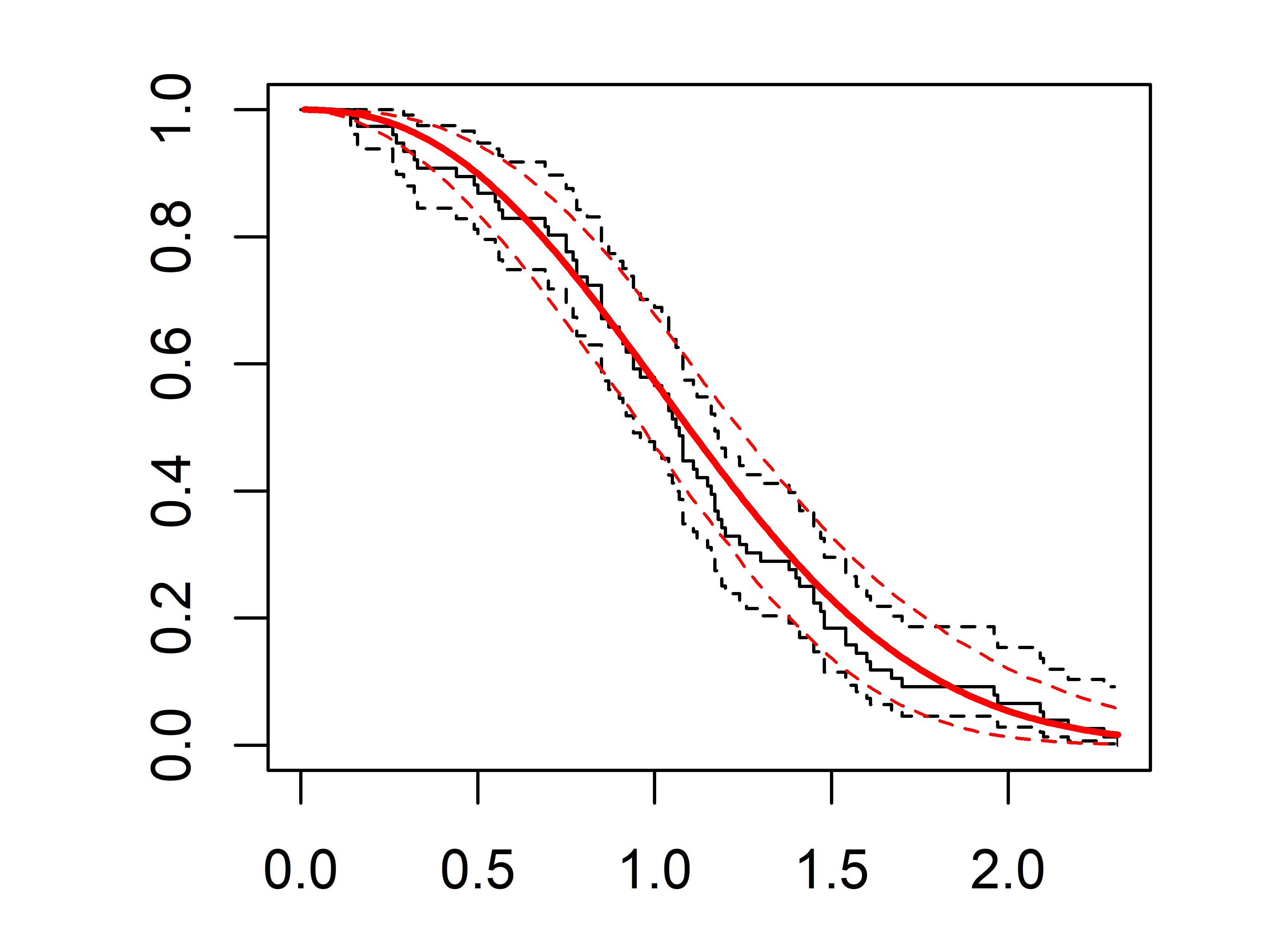 I am trying to fit a model that can predict the probability of an event at any time, given covariates that vary with time. I have repetitions from individuals. My previous question previous question may describe this in more details.

Trying to make predictions from parametric models with time-varying covariates is not the easiest way for a beginner to start with survival analysis. A few thoughts.

First, think about why you are modeling.

A) If your main interest is in prediction, there might be no need to force your data into a particular standard parametric functional form like the Weibull. In particular, a Weibull model assumes proportional hazards (PH), so a more general PH model, a semi-parametric Cox model or a parametric PH model with a flexible baseline survival, might work better. Alternatively, you could try a non-PH accelerated failure time (AFT) model; only the Weibull family (with its limiting exponential case) meets both PH and AFT. See these course notes for a succinct introduction to parametric survival modeling.

B) If your main interest is interpretable inference, try to use a model in which the coefficients have reasonable interpretations. In your Weibull model, using the parameterization favored by the flexsurv package, covariates modeled as part of the scale parameter (the default, like for b in your first model) have a nice interpretation in terms of speeding up or slowing down the passage of time. You can model covariates as part of the shape parameter (like shape(a) in your first model), but interpretation is not so straightforward. With an AFT model, the shape parameter adjusts the width of the associated error distribution of log-survival times around what you would get from just the linear predictor;* a fixed shape is easy to understand in that context. I have a hard time thinking about what allowing covariates to affect the shape would mean in an AFT context.

Second, if only one event of one type per individual is possible then you don't need to take their id values into account, as explained in the main survival package time-dependence vignette on page 4. If you do have multiple events possible per subject, then you apparently shouldn't use flexsurvreg(). The main flexsurv vignette says (page 3): "The individual survival times are also [assumed] independent, so that flexsurv does not currently support shared frailty, clustered or random effects models."

Third, things that work in one software package might not in another. You might have avoided the confusion with differing Weibull parameterizations, but you got caught in your use of a cluster() term in flexsurvreg(). Although it's not supposed to deal with clustered data, in version 2.0 it seems to accept them in a strange way. In other R survival software, cluster() terms affect the coefficient covariance matrix, leaving coefficient point estimates unaltered. When I added a cluster() term to a flexsurvreg() model, I got a coefficient estimate for cluster(id) and altered values for the other coefficients! Not sure how to interpret that. You should omit your cluster() term if you use flexsurv.(That also solves one of your problems.)

Fourth, a single plot or a simple test value like AIC isn't sufficient to validate a survival model. For a parametric model, you need to verify that you chose the correct general form; for a PH model, you need to document how well the PH assumption holds. You need to check that you have included an appropriate set of predictors, possibly including interactions among them. For continuous predictors you need to document that you used an appropriate functional form. For the main survival package there are several types of "residuals" available to help with such checks when event times are censored, but (as you probably know) the standard survreg() function doesn't accept the counting-process data format used for time-varying covariates.

Harrell's course notes and book show ways to validate both PH and AFT models. To apply those techniques to parametric models from flexsurv or the eha package, which can accept counting-process data, you will have to do some coding. The only "residual" reported directly at this time by either package seems to be the "response" residual in version 2.0 of flexsurv, the difference between predicted* and observed event times. That type of residual can be misleading if used improperly. More useful for many AFT models are the scaled residuals,* if you also keep information about censoring versus events at the observation times. That information is in the models, but for now you'll have to pull it out yourself.

*AFT models can be written as

where $X' \beta$ is the linear predictor based on covariates $X$ and coefficients $\beta$, $W$ is a specific probability distribution associated with the type of AFT model, and $\sigma$ is a shape parameter. An estimated scaled residual is $(\log T - X' \hat\beta)/\hat\sigma$, which should have the same (censored) distribution as $W$.

If $W$ is a symmetric distribution, then with $W=0$ the linear predictor estimates mean $\log T$. If $W$ isn't symmetric--like with the minimum extreme value distribution assumed by a Weibull model--then you have to be careful just what is being "predicted" by a software package. It isn't necessarily the mean (log) survival time. Or it might be. Read the manual carefully.

Not the answer you're looking for? Browse other questions tagged mixed-model predictive-models survival weibull-distribution time-varying-covariate or ask your own question.

3
Predicting time to event, conditional on time-varying covariates and survival to time t
0
Predicting Cox survival with time-dependent covariates
7
Expected survival time for Weibull proportional hazards model with R's predict.survreg
0
Predicting survival time from log-hazard
1
help with getting my data set up for cox ph (time dependent) to predict within time
0
Unable to calculate the shape and scale parameters of weibull distribution from data simulated through either gems or simsurv in R
4
Survival Analysis Expected Time To Event - Time-Dependent Covariates Cox PH
0
How to specify subject ID when using flexsurvreg to fit data with time-varying covariates