Two simple or one complex model, BIC and likelihood

I have a set of data points with a total number of Nt. I know a priori that the data comes from two distinct processes (distributions). I am trying to find the optimal model parameters together with the optimal partitioning for the dataset; such that N1+N2=Nt. I want to use the Bayesian Information Criterion, my question is which of the following BIC expressions is the correct one to optimize: As an example I will assume the problem of bi-linear fit of a dataset 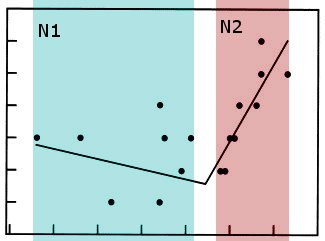 First, a non-answer, then a kind-of answer.

BIC - and other information criteria such as AIC - are really meant for model comparison (which involves two different models, not two estimates of the same model) than for model evaluation (which only involves one model.) You can see that by writing out the expression for BIC:

where $L(\cdot;\cdot)$ is the likelihood function, $k$ is the number of parameters to be estimated, etc. In your case, you are specifying a model with an unknown breakpoint, but you're not comparing it to anything, so far as I can tell. If you attempt to use BIC as a tool for selecting the best estimates, observe that regardless of what the estimates are, the term $k \ln N$ will remain the same, so you will in effect just be maximizing the other term, which is the log likelihood function, and getting the MLE. No need (or value add) for BIC in this case!

Now, if you were comparing two different model formulations, e.g., one with the data split at an unknown to-be-estimated breakpoint $m$ and each part fit to a model with $n_1$ and $n_2$ parameters respectively, and comparing that to a model with no breakpoint but $n_3$ parameters, you'd have $k_1 = n_1 + n_2 + 1$ (for $m$) for the first model and $k_2 = n_3$ for the second model. Judging from the graph above, you have a constraint that forces the fits on the "left" and "right" parts of the data set to intersect at the breakpoint; this constraint would typically remove one free parameter from the parameter count (as the estimates have to satisfy the constraint, and typically this can be done by making one parameter a function of all the others including the location of the breakpoint, so it's not a free parameter any more.) In such a case, $k_1 = n_1 +n_2$, as we subtract 1 from the previous expression for $k_1$ of $n_1 + n_2 + 1$.

However, if you know the breakpoint, you don't add 1 for it to the expression for $k$. A heuristic explanation is that it's not a parameter to be estimated, so it doesn't count against model complexity. There's a real math explanation for this also, but perhaps this isn't the place to go over that.

Is it correct that you don't actually know which data points go with each process (distribution)?

One idea is to use a finite mixture regression model. You estimate the parameters from your linear model, but allow these to be freely estimated across latent classes (2 in this case). The prior probability of class membership is also estimated. Observations can then be assigned posterior class membership proabilities, perhaps helping you see which observations come from which process. For a better explanation than I could give, see http://sites.stat.psu.edu/~dsy109/Rao_Talk.pdf

Certainly doable in Mplus (which is what I use) and R (which I am much less familiar with for this kind of modelling).

Not the answer you're looking for? Browse other questions tagged bayesian model-selection maximum-likelihood linear-model bic or ask your own question.

1
What is the correct sample size in BIC formula?
0
BIC and AIC(c) and group data
14
AIC, BIC and GCV: what is best for making decision in penalized regression methods?
6
BIC in Item Response Theory Models: Using log(N) vs log(N*I) as a weight
1
BIC useless as it depends on units?
1
BIC estimate for multidimensional data
0
Selecting a model for linear regression: adjusted metrics (BIC, AIC, adjusted R2 etc…) on training set or validation/crossvalidation using test set?