I calculated the distribution of the stock price daily ratios. The ratios are multiplicative, $d_t=p_{t} / p_{t-1}$.

But the actual CDF is not looking like a line on log-log plot. Why?

The daily prices for 4 stocks for couple of years, normalised to be equal to 1 for the first day.

The CDF of daily ratios. The x axis is log scale, so the changes would look symmetrical around x = 1.

Let's plot it on log-log scale, and it's not looking like a line at all, nether one tail nor another.

On the previous log-log chart, one tail got crushed. So what I did instead I calculated two different CDFs, one for $d < 1$ and another for $d > 1$ and plotted it on log-log scale, so both tails could be seen. And there's same problem it's not looking like a line. Why? 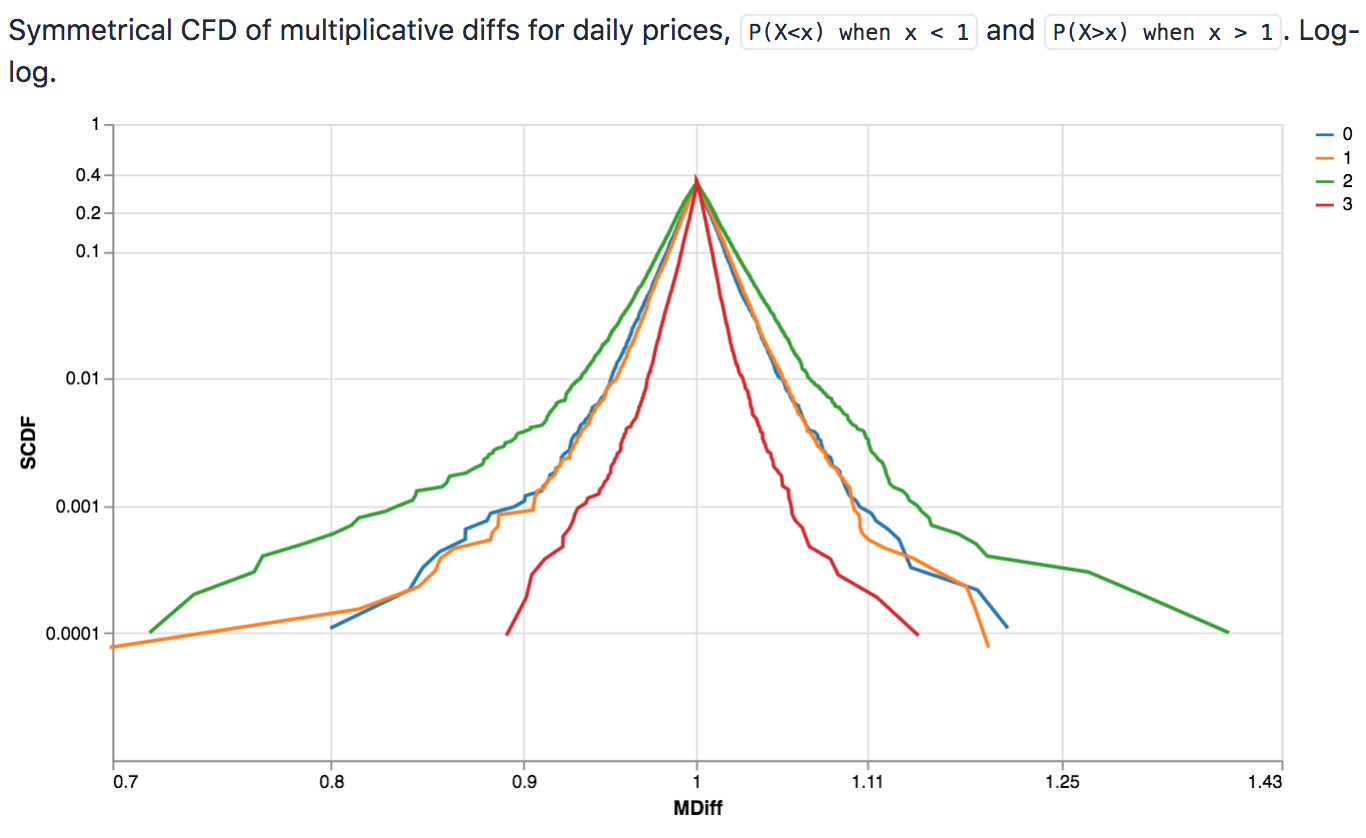 If it's not Pareto, what kind of Distribution could it be?

So, let me answer your question. I am going to try and answer the question the way you seem to have literally asked it because the alternative is book-length.

Let us, momentarily, assume that there is no such thing as a merger, bankruptcy, dividends or liquidity costs. Could we derive our distribution?

The answer is yes. Let us think about what that would imply. We could define the reward on investing as \begin{equation}r_t=\frac{p_{t+1}}{p_t}\times\frac{q_{t+1}}{q_t},\forall{t}.\end{equation}

Since we have dismissed bankruptcy, mergers and liquidity costs, we can reduce our question down to \begin{equation}r_t=\frac{p_{t+1}}{p_t},\forall{t}.\end{equation}

We can then think about what the distribution of prices must be.

Stocks are sold in a double auction, so the winner's curse is not operable. If it were, it would very much change the discussion we are about to have. If we posit the existence of an equilibrium opening and closing price, we can talk about the nature of the limit book as time goes to infinity. Remember, the firm cannot die, so we can also rule out the heat death of the universe as a possible outcome. See, humans are now immortal. Good day so far.

The rational behavior in a double auction would be to bid your expectation. The limit book around the equilibrium then becomes a distribution of centered expectations. It follows that the limit book should be normally distributed at any static point in time.

There are a couple of ways we could model that ratio of normals, but the one you propose would give you a mixture distribution of a Cauchy distribution and a finite variance distribution. It is a strange mixture as it works out to be the probability elasticity of price.

As the price moves away from the equilibrium, the distribution gets increasingly rigid in the sense that the outcome becomes narrower and narrower for most of the mass. There is still no variance, but the finite variance side of the mixture dominates. So, the farther you move up into a bubble, the more certainty you gain that you will have a low or negative return. Conversely, the closer a price moves to zero, the more certainty you get that you will have a very high return. You recover Graham and Dodd's value investing on that side of the equilibrium.

Now that is not the only way you can solve that problem, but it is the question that you asked, almost.

Because your world does have mergers, bankruptcy, dividends and liquidity costs. It also must have structural breaks if microeconomics means anything at all.

So let us think about the skew in the distribution. There are a few things going on.

First, contrary to the assumptions of Markowitz, which were just to simply the discussion, we should assume that an allocation is $X=P(Q)Q$. So price becomes a function of quantity.

Additionally, the future value may be due to a cash for stock, stock for stock, bankruptcy liquidation, or dividend liquidation event. Your time series is of firms that exist. Yet their price has to, at least in part, be contingent on dividends, bankruptcy risk, and merger risk. You have an unconditioned distribution. Since those firms have never gone bankrupt, you will have to acquire that information from the data on firms that have.

If you are using this for trading purposes, then you will also need to conform to the Dutch Book Theorem. As such, you will have to use Bayesian methods with a proper prior. Also, it looks like one of your firms did not begin its existence in equilibrium. You will need consider securities both in and out of equilibrium, something that financial economics does not do.

You also have to have structural breaks. Consider a firm that has announced a fifty-five cent per share dividend. If that announcement changes its relative value when compared to other firms, you are going to have to have a break in both the center of location and the scale parameter.

Finally, you have to deal with changes in liquidity. If a firm's price is near zero and far below its long run equilibrium price, then the probability of finding a trading partner is nearly a certainty. Conversely, as the price goes to infinity, the probability of finding a trading partner goes to zero. So your distribution will have skew and may not have an even amount of skew on either side.

Since a firm stops existing upon merger or bankruptcy, it is not possible to get enough information about the future from the historical price alone.

Now, there are other ways of solving this question, but you didn't ask that and I am hesitant to write a book here.

Let me summarize, however.

The distribution will be a mixture distribution that includes states of nature that cannot be observed in your time series, so they have to be acquired from other series.

The distribution will be a mixture of distributions, some of which lack a mean, so you are outside the exponential family of distributions and a point sufficient statistic will not exist for $r$. That restricts your estimators though how it does depends on whether you are trying to project something or arrive at inference.

If you are hoping to put money at risk, then you are restricted to the subset of Bayesian tools that include proper, informative prior distributions. Otherwise, a clever person could form a Dutch Book against you.

You will need to model liquidity costs, which is why you are getting such frustrating shapes.

You need to find your structural breaks, and preferentially, why they exist.

As a hint, you should be looking at balance sheets and the industry. After all, if the price is too far above the equilibrium, then the only way to get good returns is to found a competitor firm. That will lower the firm's future free cash flows. Conversely, if a price is too far below the equilibrium, then it is cheaper to buy the firm than it is to build more capacity. You will have mergers and possibly a destruction of capital. You may get oligopolistic pricing and higher cash flows.

The answer is that it is a mixture of multiple distributions, has structural breaks so is not stationary globally, though it should be locally, and depends on forces of nature not gathered in the time series such as changes in interest rates, commission structures on trades and so forth.

Not the answer you're looking for? Browse other questions tagged distributions lognormal-distribution power-law or ask your own question.