expected value of sample from a skewed distribution

Let us say a market's prices are distributed with a skew.

Given a sample of 10000 products, I can estimate the median, arithmetic mean and weighted average or any other statistic.

Let us say I draw 100 products from this distribution, what would be their total expected/average value? I cannot use arithmetic mean * 100 or can I? Should I use median * 100? Or should one use 100 * weighted average?

I am sorry I am still confused about this, despite reading lots of related posts here and elsewhere. Any clarification would be very much appreciated please. Thanks!

Given Dave's answer and code below, I tried to simulate my situation. Basically I assumed a lognormal distribution to get a skew. I obtain some averages from a larger sample. I want to see which average to use to best estimate the total of N randomly sampled items. It turn out that, according to this (correct?) simulation the arithmetic mean is the better average in my situation. I guess this is some empirical evidence against my gut feeling that the median is the better/more representative average in my situation ... 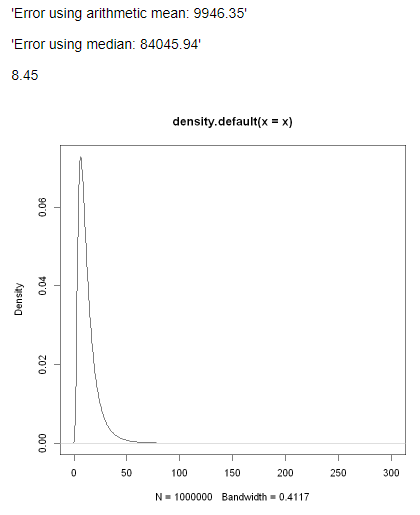 Whether the distribution is skewed or not, the usual sample mean is always an unbiased estimator for the population mean.$^{\dagger}$

The usual sample mean is a perfectly defendable way to estimate the population mean.

Should gets into lots of fascinating ideas related to constructing estimators with desirable properties but might be a bit beyond where you want to operate. Depending on the particulars of the distribution, you might find the median to be a better estimator of the mean, perhaps based on the mean squared errors of those estimators.

In your comment, you mention that median might be a preferable estimator for a skewed distribution. Let's put that to the test in a simulation study.

Not the answer you're looking for? Browse other questions tagged mathematical-statistics expected-value descriptive-statistics types-of-averages or ask your own question.