I have the following problem:

I want to compute the probability of overlap between $U$ and $V$, which I define as :

More precisely, I would like to express this quantity as a function of $\mu$, $b$, $c$ and $\sigma$, or at least prove that the probability of overlap grows with $b+c$ and is inversely proportional to $\sigma$).

The context : in my experiment, $X$ and $Y$ are sampled once, then $U$ and $V$ are sampled hundreds of times with the obtained means, and I want to know the probability to sample for $U$ a value that is "more probable" for $V$ and vice versa, ie to be in the yellow or red region : 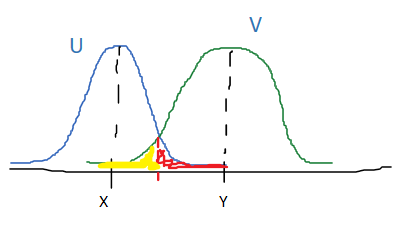 (this drawing might be biased, since according to an answer here, the resulting distribution of $U$ and $V$ might in fact be gaussians with same mean $\mu$ and different standard deviations... But I am quite confused because I do not know how to define the probability of overlap in my experiment anymore...)

8
Gaussian with a Gaussian mean

12
What is the distance between a finite Gaussian mixture and a Gaussian?
3
How to define a 2D Gaussian using 1D variance of component Gaussians
1
What do we call a set of Gaussians with the same covariance matrix?
6
Probability of gaussian being smaller than multiple other gaussians
1
The connection between linear regression and Gaussians
0
Gaussian distribution with error in both parameters: trying to create a Gaussian distribution with no error in either parameter
8
Can a (possibly infinite) mixture of Gaussians be Gaussian?