From an ecological experiment, I have time series data with 10 time points where I measured around 100 variables (shape and texture traits of algae cells) across 4 treatments (A-D). Now I would like to do a PCA (or some other form of ordination) to visualize treatment specific change in traits over time. As shown in the cartoon below, in timepoint 1 all treatments would be similar in traits (hence proximity in PC space), whereas over the course of the experiment they would diverge (to different places in PC space at timepoint 10): 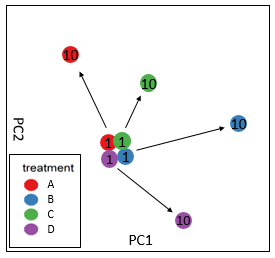 Many of those 100 traits are correlated, and not just pairwise, but many among many (multicollinearity). I would like to boil the dataset down to the minimal amount of variables with which I can represent the PC space of all 100 variables - i.e., plotting PCs of those traits vs. all 100 variables would look similar.

My problem is that I don't think the typical methods for variable selection prior to PCA work: because there are so trait variables and so many correlations among them, most explain only around 2% of the variance. I have done correlograms and manually removed some variables, but this seems arbitrary and unsystematic.

My question is whether there is some sort of automatic solution for variable selection to identify variables of importance that account for most of the variation in the data structure?

EDIT: Based on the comments I am providing some more information: a PCA on the entire dataset (all timepoints and treatments) indicates that 50% of variation are explained by PC1. My goal would be to have the selected variables explain 90% of the variation and that this would require 11 PCs (90% is arbitrary, but I don't know where do make a cutoff given that there is no clear break): 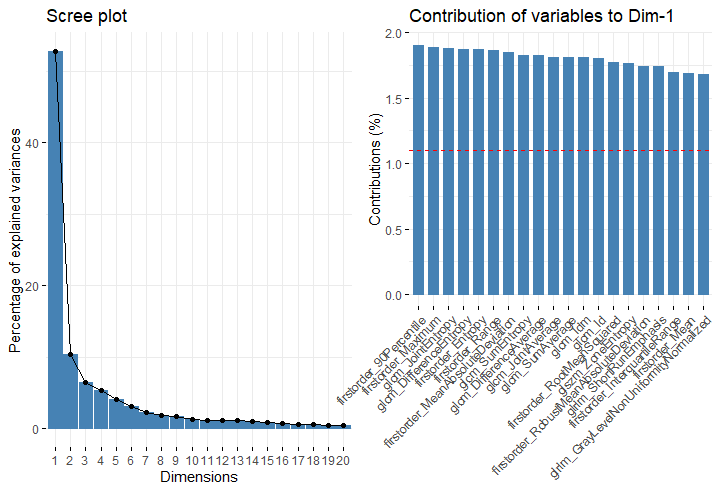 Instead of dropping variables, another, potentially more sensible approach could be to construct new hyper-variables based how clustered the original ones are in the data space (irrespective of treatments and timepoints). This would eliminate multicollinearity, and make the proposed ordination/visualization via PCA more meaningful, but I don't know where to start.

1
Find minimal set of variables for regression (PCA?)
1
How many PCs should varimax rotation be applied to?
3
PCA on the time series data yields first PC that has an opposite trend from all original time series
8
In PCA, is there a systematic way of dropping variables to maximise the segregation of two populations?
0
Use PCA to discover the most impactful variables on the original data set?
1
PCA for Feature Selection and Calculating the Total Contributions of Each Features
0
Proper method and code in R to complete PCA to determine if I can reduce variables prior to doing k-means cluster