This is equivalent to adding $R_1$, $R_2$, $R_3$ using some trivariate Gaussian copula. Is the statement true? I am leaning towards not, and I think the way to create a counter example would be similar to Is joint normality a necessary condition for the sum of normal random variables to be normal?? But it seems really hard.

However, $(X,Y,Z)$ is not trivariate Normal. This becomes obvious when you realize it is the sum of $(Z_2, Z_3\operatorname{sgn}(Z_2Z_3))$ and the independently distributed Normal variable $(Z_1, 0).$ The former is clearly non-Normal--all its probability is concentrated in the first and third quadrants--and adding a Normal variable merely "smears out" this problematic behavior without curing it.

Here is a scatterplot matrix of 2,000 randomly generated draws to illustrate. 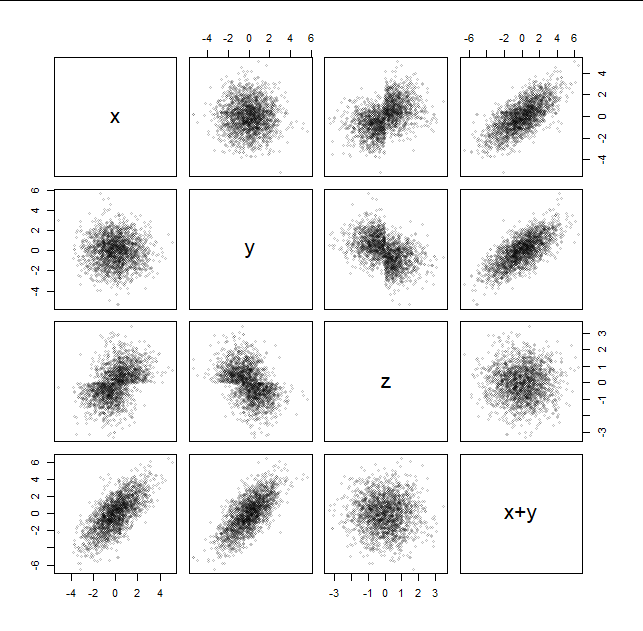 The question requires that the $X-Y$ plot be Normal as well as the $(X+Y)-Z$ plot. The obvious non-Normality of the $X-Z$ and $Y-Z$ plots demonstrates this is a counterexample.

This is a nice example of why it's rarely effective to limit exceptional behavior of probability distributions by barring "edge cases" such as degenerate versions of families of continuous distributions, provided the problematic behavior can survive even a tiny perturbation of the distribution.

Not the answer you're looking for? Browse other questions tagged multivariate-normal-distribution copula or ask your own question.

16
Is joint normality a necessary condition for the sum of normal random variables to be normal?