I am confused by the terminology because the term "independent samples" is usually used as a synonym for "unpaired samples". Does this fact mean that unpaired samples are always generated by independent random variables (assuming we have a probability model for our data)?

P.S. It is well known that paired samples (often called dependent samples) can be generated either by dependent or by independent jointly distributed random variables $X$ and $Y$ (see examples 1 and 2 below). But my question above is about unpaired samples.

If we have any doubts, we can use the chi-squared test of independence to find out if paired samples $(X_1,\ldots,X_n)$ and $(Y_1,\ldots,Y_n)$ are generated by dependent or independent jointly distributed random variables $X$ and $Y$.

I am confused by the terminology because the term "independent samples" is usually used as a synonym for "unpaired samples". Does this fact mean that unpaired samples are always generated by independent random variables (assuming we have a probability model for our data)?

No, 'unpaired data' is not always independent.

The answer below gives is first an interpretation of how 'unpaired' relates to independence. After that, it gives two examples of how two samples can still be dependent, even when there is no pairing.

Yes, you do have that a set of pairs of data lose their dependency when you switch the labeling.

The example below shows what happens when we remove the pairing of two correlated variables.

See that point at the top in the left graph, around $x,y = 2,2.5$, if you have unpaired data, then the x-coordinate that is matched with this $y = 2.5$ can suddenly be anything from the distribution of $x$ values. 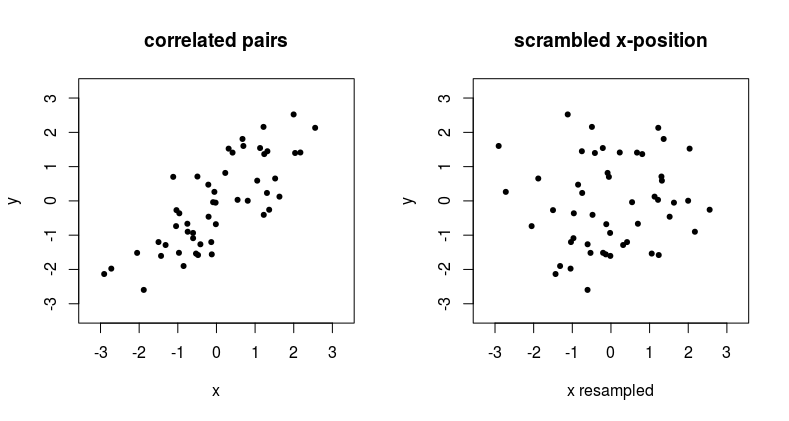 An unpaired way of dependency

But, there are other ways in which the sample $X$ could influences the density $f_Y(y)$, yet not in terms of a pairwise relationship (or generalized multiple comparisons beyond the number pair/two).

It might also be that you have two variables that are not explicitly paired, and are not stated as 'paired data', but are dependent when they are combined together based on additional metadata. For example recordings of cloudiness and recordings of rainfall from two different datasets can be 'paired' based on the date and time.

I admit that this point is a bit semantic. But it is just to prevent people from taking data from different data sets, e.g. twitter messages from Donald Trump or Elon Musk, and daily positions of the stock exchange, and assume that there is no dependency if there is no explicit pairing (the pairing is not clear since the data has different dimensions, but you can still relate the data samples in some more complex way than pairing).

On the other hand, I do not think that the term 'unpaired samples' has a formal statistical definition, and, at the risk of sounding snobbish, it is not a term that I ever hear formally trained (bio)statisticians use. Non-statisticians I work with will use that term, and I encounter the phrase in medical journals; when I encounter it, I assume that the speaker who uses this term is referring to the manner in which the data were collected, i.e. that the measured variables were not matched when they were obtained. So, to me, the term only makes sense in the context of a study design.

However, if I take your question at face value, then I think the answer is 'no': if all you tell me is that $X$ and $Y$ are generated from marginal distributions $F_X$ and $F_Y$, respectively, and you don't tell me anything about the joint distribution of $X$ and $Y$, then I cannot tell you whether they are independent.

Stepping onto my soapbox The 'unpaired t-test' is another misnomer and a term that I never hear statisticians use, despite the popularity of the term in the literature. Just call it a two-sample t-test. Stepping off my soapbox

Not the answer you're looking for? Browse other questions tagged terminology independence sample or ask your own question.