I am working on a project and I would like to try a difference-in-differences approach. I want to study how increases in network affect some outcome variable. Basically, I defined "treatment" to be 1 when an ID sees an increase in length compared to the previous period. The data looks something like this: 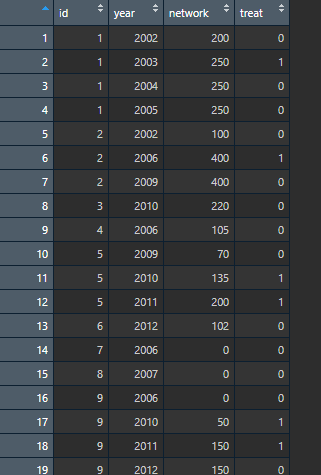 I interpret $\beta_3$ as the estimated effect of increasing the network.

I have never seen a difference-in-differences approach used with treatment defined in this manner, and I am having trouble finding examples in the social sciences literature. I would like to know if this is a valid approach, what the coefficient on $Treat$ signifies, and if you can point me to examples from the literature that use diff-in-diff in a way I have described here.

EDIT: It seems what I am looking for is something opposite of a "staggered" D-in-D approach, but I am not sure what that is.

The treatment variable is allowed to switch 'on' and 'off' over time. This assumes, of course, that when the treatment dummy 'turns off' (i.e., switches from 1 back to 0), that the unit is, in fact, untreated. In your setting, however, I don't think you can justify defining treatment in this manner, as 'network changes' emerge incrementally over time. In other words, it appears your treatment increases in discrete jumps as time progresses. If my interpretation is accurate, then treatment isn't really reversing at all; treatment is actually moving up some intensity ladder over time, in which case the treatment variable should reflect this reality.

One approach involves defining your treatment variable in a different way. To begin, the treatment indicator should 'turn on' (i.e., switch from 0 to 1) at the first network increase and then 'stay on' until the next network changes occurs; it should actually never return back to 0, which would be consistent with the removal of treatment. Accordingly, by the next network change the treatment variable should take on a value of 2, then 3, then 4, and so on, depending upon how many network changes you observe over time. Please note, it doesn't appear untreated units start treatment at any one particular time period, so untreated units will remain consistently 0.

Note how I use as.factor(treat) in the model formula, which tells R to 'dummy out' each network change. In the manner in which I have defined treatment, the integer values denoting the network expansions (i.e., 1, 2, 3, 4, etc.) represent discrete jumps in intensity; it should not enter the model as a continuous variable. I'm not sure how many network changes units will undergo over time, but the model should return a treatment effect for each jump in treatment over time.