Why does stochastic gradient descent lead us to a minimum at all?

Why do we think that stochastic gradient descent is going to find a minimum at all? I mean on each iteration SGD moves in the direction that reduces only current batch's error (SGD doesn't care about the rest of the samples). But why should this lead us to a local minimum of our cost function?

And why do we hope that this brand new minimum is going to be deeper than the initial one? Is it more likely and why? What is the reasoning?

I am assuming you are asking for some intuition behind stochastic gradient decent (SGD) and not for a rigorous proof.

First, recall that you are actually only moving into the direction of the batch gradient scaled by the rate parameter α. Thus, for every batch you only change the parameters slightly.

Let us consider a simple example. Suppose you have to find the coordinates (x, y) of a point r in the 2D plane that is close to two given points p and q. More precisely, you have to find (x, y) that minimizes the function

The solution of this problem, is just the midpoint between p and q. (which is 1/2 (p+q)). Let us assume, however, we would be solving this problem using SGD.

while the second one reduces

The point r will move along a zig-zag path. First, getting a bit closer to p then a bit closer to q then a bit closer to p and so on. If you choose the rate α appropriately then r will actually move towards the midpoint between p and q, for the following reason. If you draw a line from the starting point to the midpoint of p and q. On average you will be moving into the direction of this line, since whatever one step moves into the direction perpendicular to this line will be canceled by the next step. An example is shown below. 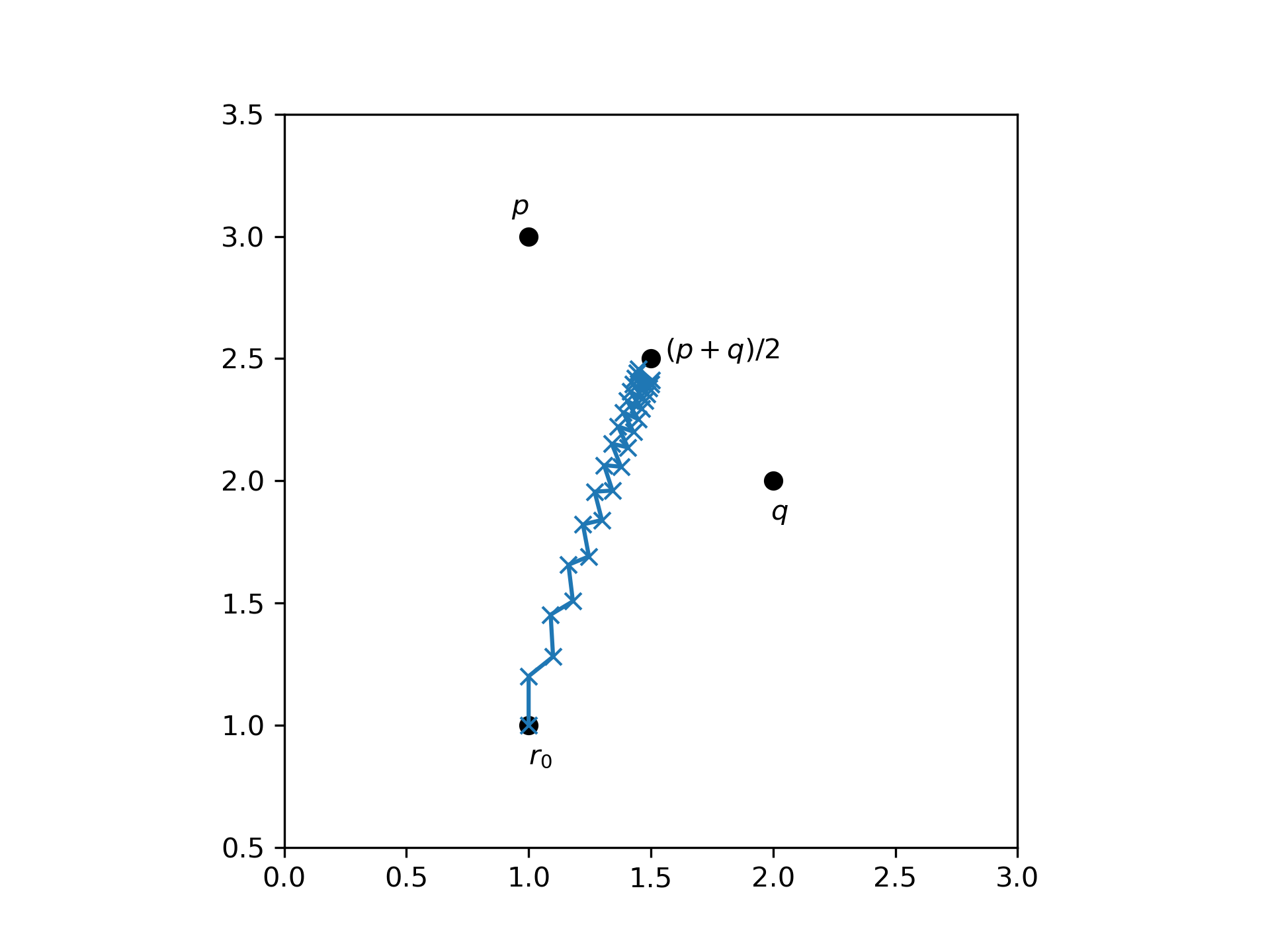 From this example, you can see, which assumptions are made when using SGD. The parameter α has to be chosen small enough such that you are not jumping around wildly, but just move slightly towards the minimum of each batch. If you were to compute the corrections of all batches at once with respect to the same value of r, instead of updating r between each batch, and then applying all corrections at once, you would actually be performing a step of (batch) gradient decent. If α is small, then r does not change significantly when the correction of a single batch is applied. Hence, the effect of computing the corrections of all batches at once is very similar to computing the corrections after each update, and thus (batch) gradient decent and SDG converge to the same local minimum.

Not the answer you're looking for? Browse other questions tagged machine-learning optimization gradient-descent algorithms stochastic-gradient-descent or ask your own question.