Adjustment set for the DAG

I have the following DAG 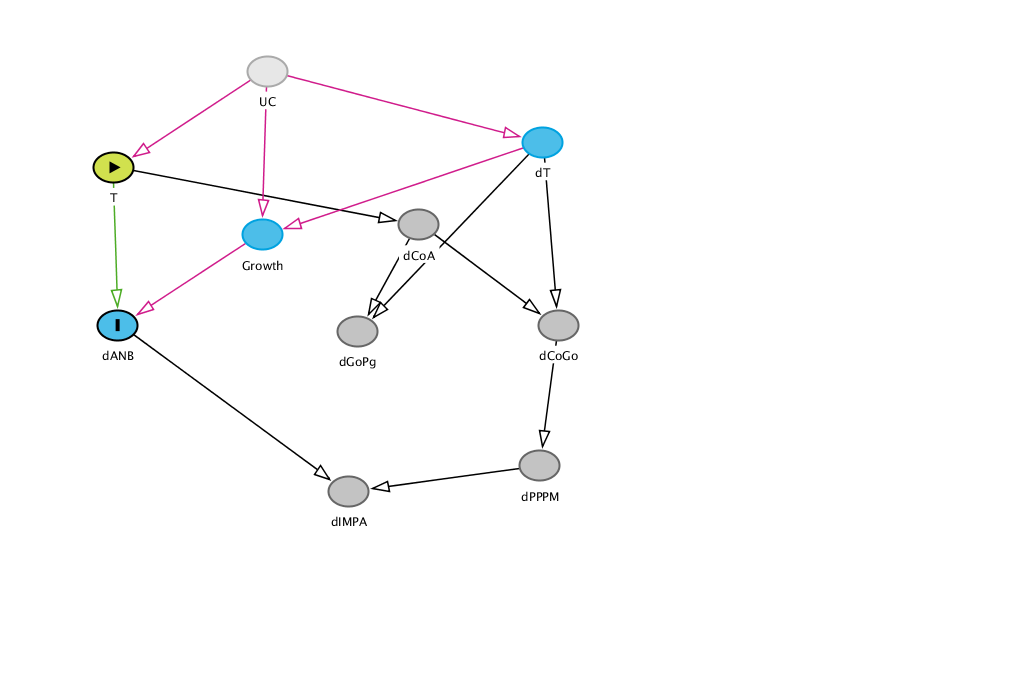 From Dagitty tool, I am getting minimum adjustment set as Growth when the exposure is Treatment and outcome is dANB and UC is the unobserved confounder variable. If the exposure is Treatment and the outcome is Growth, there is no causal path and non causal paths are blocked. In this case would the adjusted set be empty and hence ATE and ATET is 0?

For Multiple Linear Regression on the covariates, should all the covariates be taken into the account or only those in the adjustment set for the given exposure and outcome?

When you look closely, there is no causal path from T to Growth, but there are two backdoor paths, both going through UC:

So, if indeed UC is unobserved in your study, there is no way to get an unbiased causal estimate for the effect of T on Growth from the data, given this DAG.

That said, adjusting for dT will close one of the two backdoor paths (the second one) and, since dT serves a proxy (or surrogate) variable for UC, it will also partially close the other backdoor path. (More precisely, only variation in UC that is unique to UC and not shared with dT will remain as confounding influence.)

More generally, this problem seems a bit ill-defined: A DAG encodes your structural assumptions about the data-generating process. If you assume no (direct or indirect) causal effect of T on Growth, as is done in the DAG, the question of how to estimate that effect, given the DAG, becomes a bit nonsensical. It's zero by definition.

For Multiple Linear Regression on the covariates, should all the covariates be taken into the account or only those in the adjustment set for the given exposure and outcome?

If you aim for a specific causal estimand and choose multiple regression as your estimation technique, then including the adjustment set in the model is the absolutely necessary minimum.

There can be benefits from including further variables which are not in the adjustment set (for example, you typically gain precision by including predictors of the outcome, even though they are not confounders) and there can be harms (for example, you might re-introduce bias by openining a previously closed path). This paper gives an excellent overview aobut these situations and the question what to adjust and what not to adjuts for.

Not the answer you're looking for? Browse other questions tagged causality dag causal-diagram or ask your own question.

5
Front-door criteria - what does the second requirement mean?
3
Multiple minimally sufficient adjustment sets in a Directed Acyclic Graph (DAG): Which unbiased estimate should be presented?
8
Convincing Causal Analysis using a DAG and Backdoor Path Criterion
2
Is an adjustment set derived from DAG/causal analysis still valid for a *generalized* linear model?
0
DAGs: approaches for choosing the "best" adjustment set for matching
4
Causal inference - difference between blocking a backdoor path and adding a variable to regression
2
Causal Inference in a Bayesian Network with unobservable backdoor and no frontdoor
5
What's the MAG of this underlying DAG?
2
Meaning of multiple exposures in a DAG